Articles
The Voice
Enjoying The Holidays And Keeping Resolutions

It’s resolution time again. New Year’s day is a time of reflection, and a time to evaluate ourselves, and our personal and professional progress over the past year. Everyone has things that they know they must change, and to facilitate this New Year’s has become the traditional day to practice a little radical self-applied pop psychology. Sadly, because few of us are actually skilled in this practice, most resolutions fail and thus, with the predictability of an almanac, New Year’s also brings a mass annual guilt trip. So should we stop making resolutions? No one ever sticks to them, right? And where did this practice start anyway?

The tradition may have ancient roots. The Babylonians celebrated New Year’s (although they did it in the spring) with the belief (http://www.how-to-keep-your-new-years-resolution.com/html/background.html) that “what a person does on the first day of the New Year will have an effect throughout the entire year.” Pretty terrifying when you consider how many of us start the year hugging the porcelain begging for some ice chips. Not to worry, though, the Babylonians have only one opinion. Traditions vary greatly from culture to culture. Here are just a few examples (http://www.usis.usemb.se/Holidays/celebrate/newyears.html). Moslems “celebrate the new year by wearing new clothes. Southeast Asians release birds and turtles to assure themselves good luck in the twelve months ahead. Jewish people consider the day holy, and hold a religious ceremony at a meal with special foods. Hindus of India leave shrines next to their beds, so they can see beautiful objects at the start of the new year, and Japanese prepare rice cakes at a social event the week before the new year.”

“Traditional New Year foods (http://wilstar.com/holidays/newyear.htm) are also thought to bring luck. Many cultures believe that anything in the shape of a ring is good luck, because it symbolizes ‘coming full circle,’ completing a year’s cycle. For that reason, the Dutch believe that eating donuts on New Year’s Day will bring good fortune.” Tim Horton’s should really promote this one.

Many Americans celebrate the new year by eating black-eyed peas” with “hog jowls or ham. Black-eyed peas and other legumes have been considered good luck in many cultures. The hog, and thus its meat, is considered lucky because it symbolizes prosperity. Cabbage is another “good luck” vegetable that is consumed on New Year’s Day by many. Cabbage leaves are also considered a sign of prosperity, being representative of paper currency. In some regions, rice is a lucky food.” Spanish (http://www.rice.edu/projects/topics/internatl/holidays/new-year/spain-uvas.htm) people eat 12 grapes at midnight, one for each chime of the clock (no one ever finishes all their grapes on time, so the tradition is quite comical). People all over the world also make resolutions. We didn’t invent the New Year’s resolution, and we can’t seem to stick to them either.

There may be hope, though. Searching the web I found reams of information on resolutions and how to make them work.

Part of our problem my have to do with the types of resolutions we make. In no particular order, the most common are to lose weight, to quit smoking, to exercise more and to get organized. All require a strong commitment and the breaking of some very tough habits. These are all excellent ideas, but not decisions to be made lightly. Nevertheless, these resolutions are popular across cultures, as this list (http://www.rice.edu/projects/topics/internatl/holidays/new-years-resolutions.htm) from a Japanese student shows.

We’ve complicated matters a great deal since Babylonian (http://wilstar.com/holidays/newyear.htm) times, when the most common resolution was to return borrowed farm equipment. According to How-To-Keep-Your- New-Years-Resolution.com, “most of us don’t have a clue how to make a reasonable resolution, which is why [we] fail to keep the ones we make. We set high goals for ourselves, and then wonder why we never attain them. So we either stop setting goals (never a good choice), or make resolutions that are ridiculously easy to keep.” This site (http://www.how-to-keep-your-new-years-resolution.com/html/success.html) offers a number of tips for resolution success, but I will only outline them here. First, don’t make too many resolutions at once. Stick with one or two – if you succeed you can add more later. Second, be careful how you word your resolution. Instead of saying “This year I am going to relax,” which sounds like a command, try saying “This year I’m going to explore different ways of relaxing,” which suggests that the resolution is something you can work toward instead of doing it all at once. This method reduces your opportunities for failure. Next, you should make a plan. Try breaking the resolution down into steps and don’t try to succeed all at once. Finally, write your plan down and put it somewhere you will see it all the time, like on your fridge. The biggest cause of failure is simply forgetting.

My own advice – plan for failure. When you do fail, accept it as part of the process and continue trying, undaunted. If you keep failing, don’t feel guilty, many forces are working against you. One example: A study (http://www.du.edu/~mbasil/cigads.html) by the Stanford Center for Research in Disease Prevention found that cigarette advertisers may increase their number of ads during January and February in an attempt to foil would be New Year’s quitters. Also, guilt and regret cause stress, which leads to an increase in bad habits – possible those you are trying to break.

If you are still having trouble, do whatever you need to get inspired. I buy body building and fitness magazines every month because the sight of great bodies always reaffirms my commitment to be really fit. Also, try to frame your efforts in a positive manner. It’s much easier to make a commitment to eat more healthy food, than to eat less junk food. Once you eat all those extra veggies you’ll probably be too full to snack as much. There are also a number of websites that you can visit for extra support for specific habits. Many are listed on How To Keep Your New Years Resolution, including some to help you get organized (http://www.get-a-grip-on-your-life.com/), how to quit smoking (http://www.feel-better-quit-smoking.com/), and how to begin exercising (http://www.feel-better-with-exercise.com/).

If none of this helps, then try making different kinds of resolutions. Technology writer P. J. Huffstutter (http://www.latimes.com/technology/la-000102342dec27.story?coll=la-headlines-technology) suggests you resolve to clean up your digital life by backing up your hard drive, deleting unused files, and changing all your passwords. Another article (http://inin.essortment.com/newyearsresol_rrlb.htm), by an anonymous writer, has perhaps the best suggestion: resolve to volunteer at your local SPCA or disabled assistance organization.

Most important, break the cycle of guilt. Remember that the New Year can be a time to let go of the past and start fresh. Sing Auld Lang Syne, reminisce a little, and then let the past go. This year, more than ever, we need to just move on.

FYI: Auld Lang Syne (http://wilstar.com/holidays/newyear.htm) is sung at the stroke of midnight in almost every English-speaking country in the world to bring in the new year. At least partially written by Robert Burns in the 1700’s, it was first published in 1796 after Burns’ death. Early variations of the song were sung prior to 1700 and inspired Burns to produce the modern rendition. An old Scotch tune, ‘Auld Lang Syne’ literally means ‘old long ago,’ or simply, ‘the good old days.’ 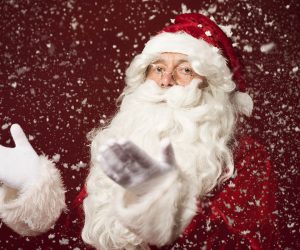