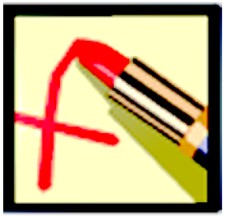 “Oh no! They’ll think I look silly without lipstick.”

It was my daughter raising the concern, as we pulled into the parking spot outside the restaurant. I pointed out that I was not concerned that I had no lipstick or other makeup on. I pointed out that she never wears makeup, yet all her friends like her just fine. My words didn’t alleviate her distress. The pressures on young girls today are heavy and had really been getting to her lately. After watching on TV a young man worshipping at the shrine of silky smooth legs of woman, for instance, she had commented only days before that she should maybe shave her arms.

I think the confusion over arms is explained by the fact that she turns three next week. But more importantly, that fact illustrates how our youngest Canadian nonmales are taught from the start, by a force apparently stronger than anything parental, that they are not good enough, that they do not look right unless altered. Barbie and breast surgery, both blatantly ridiculous statements that human women suck, have been commented on more than often, but remain devastating to female self-esteem as well as to male respect for females. And, as already illustrated, the problem is so pervasive and facilitated that it hits sooner than most young males and nonmales know what a Barbie is (or is not). It is not only a young girl’s perception of her appearance that is wounded. Young girls are bombarded with subtle messages of their lesser importance and male rights to privilege. Marc Levine has a following in the television and advertising industries. His message is confirmed in so much of what we, a society, offer our children, male and nonmale.

The problem reeks and it seeps in everywhere. One person offered me advice today. This was over the phone advice about what to do in the future to get post-doctoral work, delivered by a neuroscientist with whom I had incidentally made contact and who had never met me and knew only that I was female. Amongst other things, he mentioned that if I happened to be pretty that would increase the opportunities. I was amazed, however, at how freely and unconscionably the words slipped into the conversation. I was instantly humiliated yet knew he felt no remorse or shame and was giving me no opportunity to do anything but accept the degradation thrown at me. He expected me to swallow and shut up.

While multitudes of apparently but not very male individuals are standing idly by, men are taking responsibility for the “inherently object” attitude about women and girls instilled in North Americans. Twisting right the twisted powers that be with tough commentary on advertising and attitudes regarding young females, Dads and Daughters stands up boldly and asks a question many people are afraid to ask: is that how we should view young women: as sources of titillation? Through the Dads and Daughters organization, fathers can assert that they “need to work with other parents to demand an end to violence against females, media sexualization of girls, advertisers using anorexiclooking models, pornography, and all “?boys are more important than girls’ attitudes”. In Canada, the White Ribbon Campaign, which rose from the ashes of the Montreal Massacre, fights for the same cause, not tolerating mixed up misogyny at any level. The bottom line is it makes a lot of people sneer, it makes a lot of people cry, and it makes a lot of people act. You can make it might go away. If you are a courageous nonfemale or a curious female, test your mettle: visit Dads and Daughters (http://www.dadsanddaughters.org/tentips.htm) or the White Ribbon Campaign at (http://www.whiteribbon.ca).