Articles
The Voice
A Bug In Your Ear: How to be a Canadian

“The Canadian flag does not look like a giant nosebleed.” So say the brothers Ferguson in their first collaborative effort to describe the peculiar habits of this vast country and its elusive culture.

How to Be a Canadian is a Dummies-style handbook that explains all things Canuck in 17 chapters of rip-roaring satire.

The theme of national identity is a favoured vehicle for Will Ferguson, as evidenced in his previous works like Why I Hate Canadians and Canadian History for Dummies.

Adding fresh wit is Ian Ferguson (author of Sin City), Will’s older brother and a humorist in his own right.

I don’t recommend this book to those preparing to write the Canadian Citizenship exam. Nor should anyone read it in hopes of finding a definitive, ethnically sensitive guide to the Canadian experience. According to the authors, all Newfoundlanders are nymphomaniacs, Tim Horton’s is the national religion, and the federal government is up for re-election every two to three months. There is rampant Swede bashing and all kinds of politically incorrect mischief, and the “Cross Canada Tour” offers up an impressive and universally offensive array of provincial stereotypes. 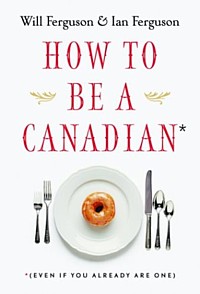 The concept of the book isn’t new either, the subject having already been covered by writers such as Eric Nicol, a Canadian newspaper columnist in the fifties. There are passages in How to be a Canadian that are eerily reminiscent of Nicol’s satiric essays on the sport of curling (“Sport Exposed”, 1947) and Saskatchewan (“Land of the Gopher”, 1947). The Fergusons have also recycled many of their own punch lines from earlier books, and inevitably spend a few unoriginal chapters on beer and hockey. How to Be a Canadian is likely something Pierre Berton would use in his prairie fireplace; the book is a cynic’s antidote to a weekend of “Canada: A People’s History”, and a welcome respite from the oft idealistic, self-conscious view of Canadian culture in mainstream literature.

Reducing the entire history of Canada to a single page of comedic brilliance and convincingly selling the sex appeal of Canadian Tire takes a certain skill, and the authors provide a punchy and thoroughly amusing romp through a familiar landscape. From the memorable chapter on the art of a Canadian “sorry” (there are 12 distinct inflections) to the scathingly droll tutorial on how to write the typical Canadian novel, the writing proves consistently funny and easily accessible.

Knowing the finer points of insulting the locals may not be the best way to assimilate the culture, but learning to laugh at ourselves is a valuable lesson and, many would argue, what we as Canadians do best.