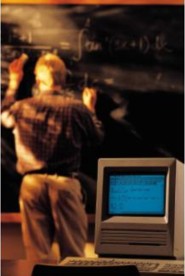 It’s a fascinating and somewhat unbelievably complex study into organizational cultures when one looks at the controversies that have erupted when traditional colleges and universities have tried to change their learning environments from ones that are mainly dependent on live-classroom lectures, the so called “teaching-centered” learning environment, into ones that are less dependent on the live-classroom lecture, the so-called “learning-centered” environment.

Thames Valley University in the U.K is one such university that has tried to transform into a “New Learning Environment (NLE).” As reported by Britain’s Quality Assurance Agency for Higher Education the principles of Thames Valley’s NLE are to:
– focus on creating and sustaining confident and capable independent learners;
– develop resource based learning as a substitute for, rather than an addition to, traditional teaching and learning strategies;
– use assessment as a primary teaching method, and as a means to evaluate the effectiveness of our teaching;
– reorganise patterns of teaching to maximise small group interaction where learning takes place most effectively;
– provide for multiple media, rather than simply multi-media development, recognising that interactions between staff and students are crucial resources to support students’ learning;
– require the development of “learning to learn” as a key strand at all levels of study;
– rearrange administrative and operational services to support students’ learning.’

All of the above sound like something educational institutions should have been doing all along but apparently they haven’t, and when Thames Valley tried to change things there was a lot of anger and confusion amongst the employees who did not want to change. The media picked up on the controversy when it was reported that student testing was being compromised. The Quality Assurance Agency was called in to investigate and gave Thames Valley a bad review which is posted on QAA’s web site, for public perusal. Thames Valley’s organizational culture would not allow change.

Even in Canada and the U.S, attempts to create “New Learning Environments” have wreaked havoc in organizational cultures. Terry O’Banion is the founder of California’s “League for Innovation in the Community College.” His book, “A Learning College for the 21st Century” thoroughly explains how the organizational culture in the community college system fights against a learning-centered environment. Terry is considered to be the grandfather of the community college system and he has been trying for more than forty years to get the colleges to put student learning and achievement first. He hasn’t had much luck.

The Association of Colleges of Applied Arts and Technology Ontario has a publication on their web site called “Learning-Centered Education in Ontario Colleges.” One of the quotes in their paper states that the challenge of trying to change a college from one that is teaching-centered to one that is learning-centered is the same kind of challenge that was faced by past astronomers who tried to insist to the church that the sun was at the centre of the solar system rather than the earth, the analogy being that students are the sun, and teachers are the earth.

Nova Scotia’s Acadia University has suffered enormous disruption to their learning environment as their administration has tried to force resource-based learning upon the faculty via IBM laptop computers.

York University professor David Noble adds fuel to the fire in the fight against resource-based learning by bringing politics into the argument. He now sees university managements as evil capitalists looking to destroy publicly subsidized higher education by turning it into a for-profit enterprise. When MIT announced that they were putting their faculty lecture notes on the Internet for free, the Canadian Association of University Teachers hailed MIT for its gesture of putting education before profit.

And where does Athabasca University fit into all of this? They are an anomaly, a publicly supported, resource- based learning university that has always striven to take down the barriers for anyone to get high quality postsecondary education services. No traditional college or university will ever be able to accomplish this. Over the next decade AU should take over all education in Canada and should get some sort of humanitarian award when they do.