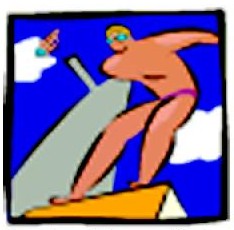 The other day someone asked me to recall the most embarrassing moment in my life. Instantly, two episodes leapt to my mind and they still make me blush when I think of them. The first occurred when I was about eight years old and my mother had taken my siblings and I to swim in Slim Creek, BC. Many of our extended family members from Alberta, which I hardly knew, were in attendance. We children were swimming and having a great time while the adults were talking on the banks of the creek. At some point, I felt the need to urinate, and thinking myself rather crafty, I decided that I need not leave the stream in order to add to it. The water was over my waist, so my mission would be hidden from any prying eyes. Unfortunately, I was wearing cut-off jeans with a zipper in the front and I imagine that “fly” was the correct bait because it was suddenly caught like a fish on a hook. The pain was intense but I managed to maintain my composure as I struggled to release my catch. The harder I struggled, the more hooked it became until with a shriek equally measured in pain and embarrassment, I summoned my mother into the water. Being reluctant to divulge the origins of my despair, my mother had to decipher my honeybee-like dance in order to find a solution to my “problem”. Minutes seemed like hours in front of fifteen wide-eyed, open-mouthed people, but mercifully we (it and I) were eventually released from our torment when Mom managed to convince me that the zipper really did need to go up instead of down.

The second incident occurred when I was in my late teens. I’ve previously written about the fact that I was heavily involved in weight-lifting and that I spent a lot of time in the Canada Games Pool in New Westminster BC. It was (and presumably is) a wonderful establishment with a large gym overlooking the pool area. On the evening in question, I had finished my workout and decided to venture into the pool. I squeezed into my too small swimsuit and, puffing out my chest, strode into the very busy swimming area.

Being single, I was always open to an opportunity, so I attempted to “strut my stuff” in case anyone of the female persuasion might glance my way. I swam through the main pool and climbed out near the overly crowded hot-tub, re-inflated my thoracic cavity, and swaggered in amongst the group. Like the parting of the Red Sea, people cleared a path for me and I sat down in the steaming pool. It wasn’t long before I sensed that something was amiss. Of thirty or more people in the tub, not one would glance or look my way, no one talked, and all seemed to be concentrating on their feet below the swirling water. Several minutes went by and I was becoming more and more perplexed but the mystery was made clear to me when I reached up to scratch my nose. To my eternal mortification, I found that my sinus cavity had partially disgorged a goodly portion of entrails, which extended from my right nostril and lay atop my mustache like a ghoulish valance. Words cannot begin to describe the level of embarrassment that struck me at that point and I made a rapid, red-faced exit from the facility, promptly bought a membership to a different gym, and can’t recall if I ever set foot in the Canada Games Pool again.