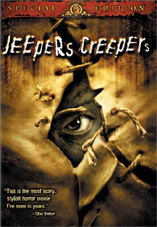 Larry and I avoid horror films. You see, generally neither of us is riveted by being scared silly. Okay, sure, there are a few classics we admire and watch, say ALIEN for instance. That was until I was flipping through the cable line-up for the month. Something took my eye in the write up for the film JEEPERS CREEPERS, and frankly, I didn’t notice if it said it was a horror.

Larry toodled out soon after and we stared at the screen. The time was ticking by and neither of us flinched or moved. Ummmm : that is until the effects were so amazing that I gasped… not in horror. No, I don’t mean some gory horror moment with blood and guts, there were moments like that – don’t get me wrong – but I was taken by the lack of clichés.

I hope I’m not spoiling this for you:but I have to wax poetic about this film! This may sound ridiculous coming from someone who spent the entire time under a dashboard of a car hiding from the first drive-in movies she ever saw. You see the films playing were BUG and SURVIVE. I was horrified in ten seconds, and I never got any popcorn in either show! I also have to cop to spending half the film JAWS in the lapel of my annoyingly, macho, Italian date who kept telling me to cut it out and sit up as I cowered in terror.

But back to the film…

First, the actors are young and I don’t recognize them. Other than a great character quickie with veteran actress Eileen Brennan, there are no household names in the film.

What is in the film is comprised of a long list. Okay:anyone wanting to see the film: I’m going to comment on specifics now!

It starts with fine performances, from the kids who star to the “creature” right down to the cops and prisoners in the police station lockup. There really were no flawed moments from any actors upon first viewing. When the kids watched in horror as something unbelievable happened – I believed them. When the creature “ate” a prisoner – no we don’t “see” that happen. His body movements creeped me out more than any horror effect could have done. I found myself wondering if the director (who I don’t recognize) was influenced by screen giant Alfred Hitchcock?

Lean special effects make the film flow without digital effects making you analyze how they are created. I found myself yelling at the screen when the kids decided to “run over” the creature with their beater car. But it was yelling about the brilliant effect. The scene on the road with the “roadkill” creature is filled with excellent, clear and thought out detail. I marvelled at the track marks on the road. There were inconsistencies to the tire marks and the material they lay in was incredibly well chosen. It looked like it was found on a typical road. In the police station a cop is killed by the creature:it left a hole in him. I marvelled again at the lovely details: the hole was uneven and small. Most films would go for huge and blood pouring out from everywhere.

In a serious break from horror traditions no one leaped out at you making your heart smash through your chest. I am amazed at the fact that we were SO creeped out by this film and the lack of need to fling things unexpectedly in our faces.

In the end, I highly recommend this film:duh! As if you can’t tell! I admit to a couple of points which might help make your decision to watch this a bit easier.

1) Larry turned to me 15 minutes before the end of the film and quietly said, “We’re staying up for a while after this aren’t we?!” Geez…if he’s creeped out I’m amazed.

2) I slept with the light on in the hallway for two nights after this film and am amazed at how frightened I was.

Anyway you look at it, it’s the amazing lack of clichés, fine acting and lack of bigger than big effects that make this a horror film the hubby and I are considering buying for our ever growing stock of films.