Articles
The Voice
The Film Review! 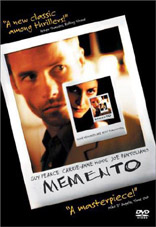 Admission: As this is my second film review:I’m becoming Leonard Maltin! But if I grow a beard:I quit!!

The film Memento is currently running on Shaw Cable movie channels and stars Guy Pearce, whom some of you may remember from The Adventures of Priscilla: Queen of the Desert. Wildly, he is sans Australian accent and no dresses are present:indeed he is difficult to recognize.

A bit of background: He was born in Cambridgeshire, England, in 1967, and immigrated to Australia to live in Geelong, Victoria, with his family when he was three years old. He is an accomplished musician and a famous Australian soap star.

And now the film:

Memento starts out in suspense and leaves us gripped to the wonderfully twisted end. Guy plays “Leonard”, a man with short-term memory only from a violent incident. Any of you taking Psyc 289 will revel in the quick and easy way to remember your facts about this rare brain damage syndrome courtesy of a gripping film and a completely unique format. Indeed, this film turns and twists so many times you may wonder if you came in mid way!

Guy Pearce and Carrie-Anne Moss portray totally real characters in this tale of a man out to revenge his wife’s brutal rape and murder. Those of you worried that I’ve spoiled the plot need to see the film to realize there is no way for me to do that!

There are few glamorous sets or details to this film. It holds your attention with well-done performances and incredible script. Intriguingly, the script calls for no brazen, flung-in-for-the-hell-of-it sex, or useless violence. There are shots from guns and murders but the director allows us to figure out what is going on without beating us to death with gory visuals! Gotta love the film if you are tired of blatant violence!

One last detail slaps us in the face– full characterizations from each of the main characters. Indeed, even the motel desk clerk has character built up. Each character builds in reverse, with the film. The director performs this little trick with small steps. Each scene is taken to a point where we are thoroughly confused, but only JUST. Then the director takes us back a step to show how Leonard got to that point in the first place. As we see the first few seconds of the scene that just played and Leonard’s complete confusion over who he’s talking to, we are stepped back in time yet again. It plays well and leaves us constantly interested in what happened just before.

Lighting is stark and real. Music is kept to a minimum and performances are -well as I said”?egad! Am I getting short-term memory?! Did I already write this review?!!

Hope you give it a look and find it as well done as the hubby and I did.