Articles
The Voice
What I’ve learned About AU Students 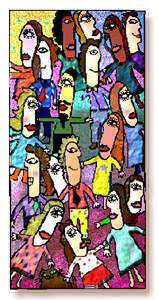 Most of the time I keep my position as a Voice columnist separate from my position as a councilor on AUSU, but from time to time, I enjoy sharing some of the insights that I have gained through my time with the council.

With the approach of my first AUSU Annual General Meeting, I have spent some time reflecting on why I became a councillor, what I hoped to achieve, and what I have learned. When I began on council, one of my primary goals was to learn more about the AU student population so that I could better determine how the union could serve its members.

I knew that this would be a difficult task due to our students studying in locations far from the main campus, but it has proved to be even more difficult than I had first imagined. My assumption, when my term began this last March, was that I would be receiving quite a bit of communication from AU students.

Surprisingly, in all this time I have only received one student email, and it was from a man who had cc’d his message to many AU and AUSU addresses because he was not certain whom to contact. Of course many students do contact the AUSU by calling or emailing our main office address, and most requests – such as those for publications, study buddies, and general union information – can be handled by our office staff. Also, students do contact AUSU quite often to apply for scholarships, bursaries, and conference funding. What is lacking, are direct to council emails that illustrate student concerns about the council or the university, or that make suggestions for how the union might be better able to assist them.

Our new discussion forums are starting to turn things around. More of you are joining each week, and traffic is starting to pick up. I am hoping that once live chat is available on the new website that we will be seeing even more of you online. Until that time, we will have to continue to think of new ways to gauge the wants and needs of our students. One such effort, that is still underway, is the survey on the AUSU Handbooks, which is currently available through the discussion forums. We hope that more of you will fill this out and let us know what you need.

Despite the difficulties in communicating with AUSU students, I have learned quite a few things about you over the last 6 months.

I have learned, for example, that you are an astonishingly diverse group, who live all over the world. Most of you are located in Canada or the United States, but we also have representatives of 70 other countries in Europe, Asia, Latin America, the Middle East, and Africa. Within Canada, you come from many ethnic backgrounds, including our aboriginal peoples, and outside Canada are many nationals living away from home, but still choosing to study at a Canadian school.

You cover all age groups, from recent high-school graduates, to senior citizens. Just this year AUSU was proud to congratulate Elizabeth Bassendowski, the year’s oldest graduate at the age of 83. AU seems especially attractive to seniors who wish to resume, or even begin studies after the age of retirement. In fact, I was introduced to AU by an old family friend – Joe Bartley, who began taking courses while in his seventies. Joe passed away several years ago, but I know that his life was greatly enriched by what he learned at AU, and that he was a changed man after his first year.

The lives of AU students are often complex, with university studies comprising only one facet of their responsibilities and priorities. Many of you have children, or even grandchildren; some already have established careers, and some battle physical and mental disabilities. Some of you travel extensively, and find AU a perfect fit for your mobile lifestyle. Some AU students already have degrees from other institutions, while others are working on their first – either entirely through AU, or in collaboration with another institution

Speaking of this – I now realize that I had underestimated the number of students who are taking complete degrees through AU. I am doing my degree here exclusively, but I had been led to believe that this was not the norm, and that most students us AU to take supplemental courses. This is not really the case – we have many students here who are taking full degree programs and a full course-load. Some take even more courses than they would at a regular university, as many attend year round. I was taking a full load for three semesters a year myself, but had to cut down, as the courses became more demanding.

In terms of your needs, I have learned quite a bit as well. I have noticed, for example, a distinct lack of communication between AU students and the university itself [outside of tutors and other students].

When students do have a problem, they tend to communicate with other students or friends on the public forms, and no doubt in private as well. Often they do not contact the university. When they do contact AU, experience has shown me that the school is very fast and effective at dealing with individual concerns, but that they often do not work to solve the underlying problems that tend to repeat with other students. However, it is fair to say that a lack of input from students makes it very difficult for the university to discern where significant problems exist.

I think that much of the trouble is due to an insufficient structure, on the part of AU, to inform students as to the various services and departments they can contact for assistance. Too many of you are still not aware of who your course coordinators are, or how to contact them. Course Materials and Tutor Services handle student inquiries and complaints, but too often students do not know about them either. AU has done wonders in sprucing up their old website, and the new site is filled with great information, but they have still not addressed the issue of making students more aware of which departments they can contact, and for what type of problems. This is, I think, the most significant issue at AU, and something I hope I can work to remedy in the coming year on council. Students should remember that they do not have to come to AUSU only when they want advocacy, but even when they just want some simple advice on who to contact if they want to address problems on their own. We are, of course, also happy to advocate.

In my first year here, I really had no idea who to contact either, and I was a little intimidated about making complaints to some departments as I did not know if they dealt with students directly, or were meant only to speak with staff. In a traditional school this would not be a problem, as those departments that are open to students have offices in public areas, and students can walk in any time they need assistance. I hope that we can find a way to simulate this kind of environment at AU in the future, and that the school begins to make much better use of technology in this area. Until then, and even afterward, AUSU will be here to help direct you do the services you require. I hope we will here from you, as your input is the only thing that will keep us moving forward, and improve our school for all students. I look forward to learning even more about you.