Articles
The Voice
American News on Your Television! 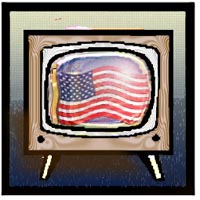 Over the past few weeks I have indulged myself, now and then, in watching American news broadcasts on my television. I haven’t been tuning in with the expectation of staying informed while receiving a fair and unbiased perspective, but more to observe the American media spectacle in all its red, white, and blue glory. What caught my attention immediately about these nightly broadcasts were the products being advertised during the commercial segments of these programs. Almost every ad was for some sort of pharmaceutical concoction which would serve to make the viewer’s life more bearable. There are ads for dietary supplements, heartburn pills, and anti-depressants. Over and over the viewer is bombarded by images and suggestions which say that there is something not quite right, and that there are easy fixes through medications and aids to make it better.

The one commercial, which is for an anti-depressant pill, remarks that “:the cause of depression is unknown,” and then goes on to show us very simple line drawings of working brain cells with a voice over saying something to the effect that this represents what might be a cause of depression with respect to the chemical workings of the brain. Leaving aside the criticism that pharmaceutical companies appear to make drugs that only suppress symptoms rather than yield cures, this commercial suggests that we don’t know what the cause of depression is, but we do know that giving you this drug will alter your brain chemistry in such a way that the symptoms of your depression will diminish. But of course, it does nothing about the causes because we don’t quite know what those are! And that heart burn? And that other ailment you have, that other disease“?what are the causes of these? Why is it that there are so many people in the world who are not well, so many that are suffering dis-ease?

Does anyone watch the news?

And on the news of late, what treats the viewer’s eye? There’s continued conflict raging everywhere we turn. Israel and Palestine continue to battle it out, America fights its unending war on terrorism, which seems to allow them to point their finger at anyone they choose, and appears to give them the right to roll in with the bombs, if only they are doing their best to rid the world of those “terrorists.” And the war on terrorism has been woven into the war on drugs. Ads on American television tell the viewer that buying drugs supports terrorism. I’m not sure, exactly, how buying marijuana that has been grown in a hydroponics operation by some Caucasian fellow in B.C. supports terrorism, but I am sure it can be spun to make it so. Perhaps it’s the idea that by smoking some pot people might be less prone to reactionary and decisive violence. Shrug”?I don’t know. But I do know, courtesy of American news, that there is a huge epidemic in the States: people across the nation are being hooked on speed.

And this is bad, right? All those middle American mothers taking speed to cope with the pace of the modern world (see:http://www.stopmethaddiction.com/meth-in-the-news.htm). Other people from other walks of life smoking up speed to keep step with the break neck stride of progress. It is something that needs to be stopped”?unless you are in the American military. Here the war on drugs becomes the war with drugs; that is American fighter pilots have the green light to pop their “go pills” to keep them sharp and alert on today’s modern battlefields (see:http://www.globalsecurity.org/org/news/2002/020914-speed1.htm). Apparently, the consumption of this type of military sanctioned speed is partly responsible for the deaths of those Canadian soldiers that were incinerated in a “friendly fire” by American bombs. So, which is it America: is the taking of speed an epidemic or an advantage? When life is framed as a dog eat dog battle, when is it considered appropriate to take drugs to cope? Apparently, if the news is any measure, then we are to take drugs of all sorts, whenever we can, but only if these drugs are sanctioned and sold to you during the nightly news broadcast.

So, what are the causes of depression, disease, and disorder? Well, I’m no doctor, chemist, politician, or any of that, but it doesn’t take a rocket surgeon to see that maybe it might be our own doing. Perhaps not on an intimate and personal level, but it is our ways of living, being, and relating to one another which appear to produce such a heightened sense of anxiety. We have a few thousand years of history under our belt, of which the nightly news is hardly a ripple on the surface of this pond of time, and even though history shows us clearly that fixed ideologies and self-privileged ways of life create conflicts and tensions among various collections of people, we haven’t learned much of anything. We still tend to hold dogmatically to our vision while negating or trivializing different points of view, and is it any wonder that this should make people anxious, nervous, depressed? If we cannot know when it will be that our personal ways of thinking and being in the world will suddenly be branded a problem which needs to be dealt with, if we need to constantly concern ourselves with keeping in step with the status quo, if we need to make sure that we are sitting on the correct side of the fence”?where the grass is obviously greener, if we are constantly under the impression that there is a great dark evil out there in the world that threatens to close in and destroy us, then there is no doubt why we need medication”?and plenty of it! Of course, all this finger pointing towards the other, supplemented by copious amounts of mind altering chemicals, serves to entrench the darkness in our own beings, gives it walls and moats by which it becomes unassailable to self-analysis, to self-criticism. As long as we continue to look exclusively to the other for the manifestation of the darkness of our beings, all we will have is more medications which suppress symptoms but do not deal directly with causes. If we cannot be self-reflective about our own roles in creating discord, then the causes of our troubles will persist in remaining within realms of the unknown.

Remember to ask your doctor if a rigid and self-denying point of view is right for you.