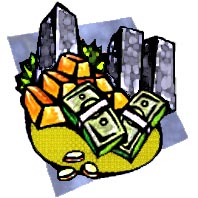 HALIFAX (CUP) — Atlantic Canadian university graduates seeking work may have to venture outside the region if earning potential is their top priority.
A report issued by the Canada Millennium Scholarship Foundation indicates that Atlantic Canadian university graduates earn “significantly less” than counterparts in other provinces.
According to the report’s co-author this discrepancy is a reflection of regional economics rather than educational quality.
“I don’t think it’s saying anything about the condition of graduates but rather about the workplace conditions they’re coming into,” said Sean Junor. “In smaller provinces such as Manitoba, Saskatchewan or in this case Nova Scotia, you don’t have the high paying jobs, the company head offices that can pay incredible starting salaries.”
Job seeking graduates can expect to earn $ 25,000 in Atlantic Canada compared to $29,500 in Central Canada and a high of $37,000 in Western Canada. It’s a statistic that Junor doubts residents of the region will find surprising.
“There’s a lot of data in this report that are surprising. I’m not sure that this is the most surprising. Simply, the wages paid in cities like Halifax and St. John’s aren’t as high as those paid in Calgary, Toronto or Montreal,” he said.
David Hare, the Nova Scotia chairperson of the Canadian Federation of Students isn’t surprised by the findings on the low starting salaries of Atlantic Canadian graduates but he is taken aback by what he perceives as omissions in the report’s contents.
“The fact that Atlantic Canada has lower starting wages and higher unemployment than other parts of the country is not surprising,” said Hare. “What is surprising is that this report ignores the student debt crisis.”
Hare believes that the low starting salaries are yet another obstacle Atlantic Canadians must face when choosing to pursue higher education.
“The debt crisis in Nova Scotia is appalling. The Millennium Scholarship Foundation has done nothing for Nova Scotia. Couple that with the highest tuition in the country and then couple that with the lowest starting wages and high unemployment and you have a catastrophe,” he said.
According to Fred Morley, vice president and chief economist of the Greater Halifax Partnership these potential financial hardships aren’t keeping young graduates from choosing to call region’s largest city home.
“Usually low wages are a reflection of a low demand for labour,” said Morley. “We know that the unemployment rate in Halifax is fairly low. There are more people wanting to live and work in Halifax than there are jobs.”
Morley believes that factors other than salary may be what makes Halifax most attractive to young workers.
“Wages don’t tell you everything. If your costs of living are a little bit lower in Halifax then that comes into play. Quality of life is another factor as is proximity to friends and family.”
According to Junor’s research such intangible benefits might not be enough to keep graduates in the region. He believes that increased mobility among young Canadians means that recent graduates are free to seek their fortunes outside their home provinces.
“The businesses that are there offer the best they can. If that’s good enough students take them up on it. If not they pursue other options. People migrate where the high wages are, whether the cost of living is higher or not.”

Albertans are the highest earning graduates in the country; PEI in last place