Articles
The Voice
The Harried Student: The Wisdom of the Baba 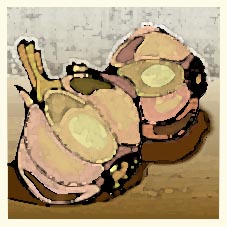 They say she was a gypsy. I’m fairly certain she wasn’t a spy.

Her birth certificate says she was born in Alberta. But the year is scratched out. She had this thick Russian accent. And a distinctively folksy Slavic farmer chic about her. She wore a purple babushka, kept a flask of vodka in her purse, and could say “Pah” like you read about.

She was a free spirit with uncanny luck. When she got too hot in the morning sun, she would whip off her shirt (Gedo’s undershirt) and whomp about the garlic patch in her bra (emergency fifty dollar bill peaking out the bottom) and rubber boots. She told me garlic was a gift from the earth that could hide the smell of vodka any day. An avid reader, Baba had deep respect for education. She said she received her schooling in Alberta, even won a Governor-General’s award. But it was never really clear if that was in a poker game.

She was an academic icon for me as I grew up: Because she lived closer to Athabasca than I did when AU first came into being. Proximity was good enough for me. Baba was an academic.

Not only academically, but also in so many other ways, she was my inspiration and role model. Baba taught me old proverbs and passed on generations of wisdom, most of it about garlic or vodka, but some other shrewd stuff, too. I remember making mashed potatoes, a traditional dish of the old country (Byelorussia, Georgia, the Ukraine, Russia, and a few other places), with Baba one Sunday afternoon. She paused from her work, called me over from my garlic peeling and said, “Remember these words, my little kolbasa. Don’t just splash milk in. You’ll get stuff in your eye. You’ll make runny potatoes. “ Then she offered me her flask and bonked me on the head when I refused it. That was her way.

Like the scent of garlic that remained on my fingers throughout my adolescence, many of Baba’s words and ways remain with me now. Perhaps that is because some of her words closely paralleled the proverbs that appeared all over the schools I spent my weekdays in as a child. Not the sayings like “In case of fire, break glass”. And not the ones in black spray paint. I mean those inspirational sayings like the one about three things that come not back: an arrow sped in flight, a word hastily spoken, and an opportunity missed, for instance. In fact, I once asked Baba if this particular saying bore cultural parallel to what she told me about the milk and how she bonked me about the vodka. She agreed, in her cryptic Baba way, setting me up for transcending cultural insight and eternal academic motivation. She said, “Pah. Do your homework”.

With Baba’s ongoing academic leadership, role-modelling, and wisdom for life, I have been inspired not only to be unable to stop taking distance ed courses, but also to continue to verify the deepest meaning of humanity’s axioms. Some things I have learned vicariously. In particular, I saw the value of weighing actions before proceeding when I witnessed someone deeply regretting their actions. The lesson came one brisk and misty long-weekend morning. Asleep in my tent, I was awoken by mumbling voices and shuffling feet nearby. I heard a twang, whoosh, pip, zoioioioing. It was not the sound of Baba’s bra getting caught on her undershirt. It was something right above me. Lying on my back on the cool Alberta ground, with my eyes crossed, I saw it: glinting like Baba’s flask, a cold metal point. Staring down at me in my deep woods sleeping bag was an arrow, its flight through the top of my deep woods tent stopped only by the forces holding green canvas together.

Some things I have had to learn personally. In my wayward youth, for instance, despite Baba’s forewarning, I once poured the milk way too fast and there it was: milk in my eye. Likewise, other of my wisdom has been gained through my own bad judgment. I once hastily typed to my tutor: “Hi Pete: I resent your feedback. Audrey” I meant “re”, “hyphen”, “sent”. Sent again. I was saying that I had emailed again the feedback he requested. I tried to formulate an email apology when I realized what I’d written and that it had been six weeks without a response, but everything I wrote seemed feeble, insipid, like so much runny mashed potatoes. Even when I called to explain in my own voice, all he said was, “Pah”.

I have supplemented the wisdom of Baba and classroom posters in other ways. I have learned real-life applications of the wisdom of the ages about missed opportunity. I learned one lesson from a friend. Better to say acquaintance. I didn’t really know her well. She lived on my block. Off and on. Kind of an eccentric, one day she stopped at my house and invited me out for a morning game of Bingo. She said she could feel it; today was her lucky day. I said, thanks but I’ve got to finish TME2. Outwardly. Inwardly I said, Bingo? I’d rather choke on a clove of garlic. A few hours later that morning I was out checking my potato patch. She stopped in to tell me her hunch was right. Pulling the fabric of her T-shirt forward to reveal a bra overflowing with fifty-dollar bills, she exclaimed, “Pah!”, bonked me on the head, and whomped off to the liquor store.

Audrey is a distance ed maven and part-time writer living in the United
Kingdom. She is finishing her last year of an honours Master of Health
Science degree, in preparation for a distance ed PhD in how to get a
distance ed PhD. A mother of four, she sporadically sleeps, is in love with
fractal math, and has found peace where neuroscience and Java programming
meet.

The Harried Student: The Wisdom of the Baba FROM OCTOBER 2, 2002