Articles
The Voice
Watching the Skies 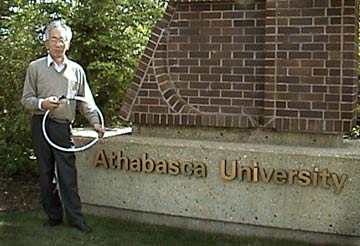 [Photo provided by The Insider: Dr. Tsuruda shows off the antenna he uses for studying the aurora’s radio emissions.]

Dr. Koichiro Tsuruda from Japan was a recent visitor to AU Central to study auroras in Athabasca and Fort McMurray. AU’s Professor Martin Connors assisted for four days of the two weeks that Dr. Tsuruda observed. Martin is happy to report; “we had clear skies and strong aurora almost every night he was here.” This is in sharp contrast to Dr. Tsuruda’s last visit. “He stayed here two weeks last November also, but had two weeks of completely cloudy sky!”

Dr. Tsuruda came because of an AU initiative to build the Athabasca University Geophysical Observatory, which has strong ties to the University of Calgary where Dr. Tsuruda has worked extensively.

Martin reports that AU now has some of the best videos of ‘pulsating’ aurora ever taken and will study the shimmering or pulsation of the aurora and how that relates to waves in space. The antenna was to record radio waves at ground level but he notes they were surprised to detect little radio energy.

Dr. Tsuruda’s colleague Dr. Ikeda also visited but observing is not his specialty and he mainly took in some quiet time in Athabasca, a very relaxing place compared to downtown Tokyo where he lives!