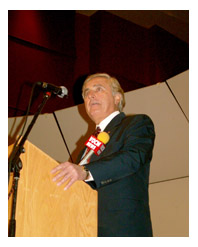 (photo provided by CUP)
ST. JOHN’S, NFLD. (CUP) — Former Saskatchewan Premier Roy Romanow came to Memorial University to tell students that money alone isn’t the key to saving Canada’s public health system.
Romanow, who is currently the sole commissioner of the Royal Commission on the Future of Health Care in Canada, said money problems are central to Medicare’s problems, but they should not consume the entire health care debate.
“The debate has been too narrowly focused on fiscal responsibility,” Romanow told the audience. “Money is not the answer unless that money is used to buy meaningful, transparent change.”
Romanow made clear it that Canadians want a health care system based on promoting wellness and prevention, rather than treating illnesses once they occur. He said the Canadian health care system today is more like “an illness care system.”
He also says more government cooperation is needed to solve the current health care crisis. In the past, there has not been much cooperation between the federal and provincial governments across Canada, he said. Romanow says the means to run a high-quality health care system exist, but they are not being used to their full potential, likely because of the lack of cooperation between the two levels of government.
Romanow called the federal provincial dialogue on medical issues dysfunctional, and said health care is too important to be left to individual provinces.
Part of his mandate is also to raise public awareness about the workings and the state of the health care system in Canada. He called for greater public participation in the institutions of medical care in the country.
Laurina Leyenaar, head of the Medical Students’ Society at Memorial, said Romanow’s findings will directly effect students in a statement to Canadian University Press.
“It is not going to be easy to fix the system,” she said. “Mr. Romanow alluded to the fact that our “?national’ system actually consists of 13 different systems, with discrepancies in service delivery, etc. This illustrates the enormity of the challenge faced in trying to reform the system and yet I think it is critical to realize we must deal with it now.”
“As future physicians who will be actively involved in the delivery of health care services in this province, and across the country, medical students . . . will work to ensure accountability in the implementation of Mr. Romanow’s recommendations,” said Leyenaar.
The Romanow Report on the Future of Health Care in Canada will be released at the end of November.
The Senate’s Standing Committee on Social Affairs, Science and Technology, chaired by Senator Michael Kirby, made recommendations similar to Romanows’ in a series of several reports.

IT’S UP TO CANADIANS TO SAFEGUARD MEDICARE. WORTH A SECOND LOOK