Articles
The Voice
Advertisement and Anxiety 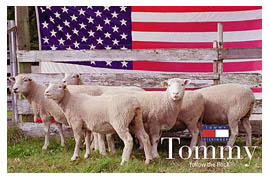 Every day an overwhelming deluge of advertisements bombards us. We are exposed to them on the sides of buses, on the inside of buses, on benches and bus shelters, in newspapers, in magazines, over the radio, on television, on billboards, on the sides of buildings, in shop windows, on signs set up on the street, as part of the paint job on some vehicles, in our email or on web pages”?heck, we even see advertising on some of the clothes that we wear. We are embedded in an environment that is always out to inform of us of a product we need to have, or a service that we need to employ. In short, we are constantly and unabashedly baited to consume. Advertisements can be shameless in their attempts to bring us to beliefs about what we are, or perhaps better, what we could be if only:and in this, advertisements can inspire shame in the individual.

It is often the case that, if an advertisement is selling anything these days, then it is likely selling an image. Gone are the days were an advertisement would be a simple exposition regarding the product, and list its price. Contemporary ads typically lure people into believing that a product carries with it a lifestyle, a way of being in the world. Many people feel that even if this is the case, they are not affected by the images that ads are selling them. However, the irony is that many of these same people who claim that ads have nothing on them, that they are able to see through and ignore the images that they are being baited with, are in fact the same people who will be wearing Budweiser baseball caps, Nike clothing, or some other brand label bit of apparel. In fact, it is those who feel that they are immune or able to ignore advertising that are likely to be most susceptible to its insidious grip: when we learn to ignore that which is right in front of us is when what is right in front of us gains its most power. By thinking that we are immune to advertisements we set ourselves into the zombie-like mode when advertising has its greatest hold.

Think of all the jingles and images that occupy a typical consumer’s headspace. Think of how easy it is to recall Coca-Cola ad campaigns from years gone buy: “Have a Coke and a smile,” “:in perfect harmony, I’d like to buy the world a Coke:” “It’s the real thing,” etc. And it doesn’t merely begin and end with Coke. How much of any average Westerner’s mind is filled with such refuse? And if only we could refuse this constant bombardment of images, signals, signs, symbols, and messages about what it is that gives our lives value, what things we need to have a meaningful and happy existence. But we cannot withhold our acceptance and reception of these messages: we are living in an environment that is saturated with such one-sided communications.

With all this imagery floating about in anyone’s mind, is it any wonder that people become debilitated with increasing anxiety, and that we live with worry generated from an acute sense of unsatisfied desire? In every ad there is the subtle implication that there is something that the individual is lacking, that the individual has a need or desire that isn’t being fulfilled”?that individual is not quite whole, and thus, in a sense, not quite “right.” Ads appear to instil in people the feeling that they are something less than:if they do not immediately get the product, buy the service, subscribe to the image that is being sold. In other words, an ad functions as a way to create in us a feeling of lack, open up a hole in our lives, create in us a void and emptiness where none existed before. In short, ads seem able to breed anxiety.

Thus, ads are neither harmless nor passive. Advertising can be seen as an active parasite that seeks to fulfill its goal by feeding the shadowy aspects of a human existence. In appealing to our wants and desires to belong, to feel fulfilled, to feel secure, to feel safe, to feel as a part of something more, advertising exploits and abuses, assaults and debases, degrades and devalues our lives.

Take, for example, an ad currently running on television which appears to assault and degrade children who wet their beds. The child is in the ad is happy once he has the product because now the other kids can think of him as normal. The implication for any bed wetting child”?and his or her parents”?who views this ad is that a child who urinates while sleeping is abnormal, and that until he or she uses the product, there is reason to feel ashamed. How does this not increase anxiety in the child, and likely in his or her parents, who is probably already feeling distressed about an aspect of his or her human existence? And this is merely one of a plethora of examples that could be cited. Ads often attempt to instil a sense of shame in the individual if he or she is not using the product, is not buying the service. If the individual doesn’t have the product/service then he or she is somehow subhuman, is living a life that is lacking, is in no way in a position to have a fulfilling and meaningful life. This is what some advertisements seek to inspire in their victims.

Is it any wonder, then, that we sometimes feel that we are living in a world on the edge of oblivion? Is it any wonder that we feel anxious and alienated from our fellow human beings? There is no doubt that some advertising promotes and contributes to such feelings of dissatisfaction, lack of fulfillment, a sense of depreciated worth. If we are constantly exposed to, and dwell within, images and messages that suggest that we are not whole, not satisfied, not normal, then there can be no doubt that these images and messages will be adopted into our self-images. Advertisements, by their very purpose and design, appear to be creating more anxiety in an already over anxious world.

Fly on the Wall—Every Picture Tells a Story