Articles
The Voice
Che: Images of a Revolutionary – Researched and compiled by Fernando D. Garcia and Oscar Sola 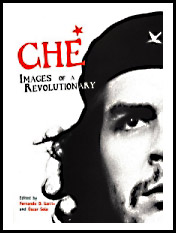 Unlike many photo books of its type, this pictorial journey through Che’s life is very expansive, covering his life from birth until his death, with only his teenage years being sparsely covered. The wealth of images is stunning in its broad coverage and it reveals much of Che as a human being outside of his political and military life. Included are photographs of Che with his family, his pets, self-portraits taken while he was in hospital, Che in disguise, and the instantly recognisable photograph taken by Korda in 1960 (p. 198). Of the photograph the book says, “Pictures of Che usually portray events: his personality is enough in itself to make an event. But here, what Korda came across was exactly the opposite. The effect of the original shot is surreal. This is a portrait that seems to float in space, with surreal distractions . . .” (p. 198). Some of these glimpses into Che’s life are raw and even shocking. They show a sensual figure (p. 210), a loving son (p. 100), a medical student (p. 23), and even the stark crudity of his death, and the manner in which he died (p. 188 – 195). The selection of photographs attempts to hide no facet of Che as a man, from his ego to his emotionalism.

A welcome feature of the book is the amount of text that accompanies the photography – not only biographical information, but also quotations chosen as counterpoints to the pictures. One photo of Che as a young man sitting astride his motorcycle (p. 25) is accompanied by a quote from Baudelaire, who is speaking of “real travellers” – a very appropriately chosen piece of text given Che’s love of travel, which began when he was still a medical student in Argentina.

To some, the title may be misleading, conjuring up an impression that the book is solely about his military and political career. It isn’t. While it does cover the revolutions Che participated in, it is more about the evolution of a man, of Che, from birth to the mystique that continues to grow around him more than thirty years after his death.

This collection of photographs is a wide-ranging, intimate, sometimes disturbing attempt neither to hide nor necessarily further romanticize an already mythical figure. Even with its expansive nature, it does not obscure Che’s mystique. Each time I open it, I find myself encountering yet another surprising aspect of Ernesto “Che” Guevara, and I would quite happily recommend this book to anyone wishing to delve into his past, and his self.