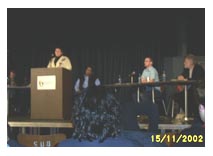 On November 14 CAUS held the first of a series of tuition forums at the U of A campus. Speakers were Raj Pannu (NDP), Ken Nicol (Liberal), Fran Trehearne (U of A), Mike Hudema (President U of A SU), Shirley Barg (Vice-president AUSU), and Dan Preece (U of A Grad Student association).

Shirley Barg opened the session by giving a brief explanation of the important role Athabasca University plays in distance education delivery. AU has about 15,000 Alberta students, and many of these are students enrolled at campus-based universities, taking supplemental courses at AU. Some tuition concerns faced by AU students are:
1. a proposal to remove distance education from the tuition cap, a form of deregulation and removal of government control that could have serious implications.
2. underfunding of AU’s technological infrastructure. This means AU students pay a far greater share – approximately 70% of the university budget comes from tuition.
3. underfunding of part time students.

Dr. Ken Nicol followed, commenting on the notion of determining funding based on the ability of a student to pay back their loan after graduation. He gave the example of Ireland, where 15 years ago free post secondary education began to be offered. Ireland now has one of the most rapidly growing technological economies. Nicol said that our government is burdening students, not encouraging them. Rather than asking “what can I contribute to society?” students are asking “how can I pay back my loan?”

Student loans create a 2-tier system that excludes students and places an unfair burden on families; creating a “support system for financial systems.” Rather than helping students, we are enriching financial institutions.

Mike Hudema spoke next. He pointed out that tuition has risen 209% at the U of A since 1991. The 6.4% hike, along with differential tuition for law, medicine and business, will effectively double tuition in many faculties. Other provinces are freezing tuition or rolling it back, and tuition relief needs to be a priority in Alberta. Mike called these tuition increases an “attack on accessibility” that leaves out low and middle income students; a form of “capital punishment” that punishes those without capital.

He pointed out that high tuition deters qualified students without finances from even applying, since low-income students are half as likely to enter medical school. Eventually there will be no more public interest courses as students are forced to choose courses and programs that lead to high paying jobs. Mike also referred to a CAUT study that showed hours of work required to pay back tuition are already six times higher than 1991. A law degree tuition of $80-100,000 currently takes 9-12 years to pay back, and the dramatic increases proposed by the U of A will have a serious effect on student choices. He concluded by stating that the number one solution is more government funding, along with better administration of the university budget. Enough is enough!

University representative Fran Trehearne followed, stating that the future of post secondary education is broader than tuition only. He claimed that it is hard to convince the public to spend money on higher education, since they do not see it as a priority when compared to issues such as health care. The government is also not convinced that greater funding is needed for education, seeing it as a highly marketable commodity. When “doors are jammed” with students, the government feels there is no problem with tuition costs. Trehearne insisted that the biggest factor affecting accessibility is the lack of facilities, not high tuition. He stated that the U of A simply cannot admit another student, there is no room.

Trehearne also spoke of the importance of research to the U of A, since research grants represent the greatest financial contribution to the university. In the future in Alberta there will be greater differentiation, more degree granting institutions, with one or two strong research universities.

Grad student rep Dan Preece was next. He confirmed that when their group was lobbying the government for more money the attitude was that the “average voter thinks funding for education is not a priority”. Increased tuition is not something only parents should worry about. There is an impending “brain drain” as those with PhD’s who are currently running things will soon be retiring. There are not enough replacements to fill the need of some 40,000 PhD’s in ten years. The government has set a goal of increasing grad student enrolment by 5% per year. Only 50% of PhD students complete their degrees due to lack of funding. Loss of income and debt load pulls them from their studies to go to work. Without greater funding for grad studies, government targets will not be met, and in10-15 years our economy will lose a substantial part of our educated workforce.

The final speaker was Dr. Raj Pannu of the NDP party. He attributed increased tuition to the government’s cost shifting strategies. The government is engaged in deliberate policy making that puts all education costs on students, in spite of economic justification to expand education and keep costs low to attract more students. 12-13% of tuition used to come from students, but in 1994-95 a decision was made to raise this to 30%, justified as necessary to address the budget deficit. Once the deficit was gone, the government used elimination of debt as justification. Now it has become a philosophical issue, a consumer mentality – if students want an education they should pay for it.

Dr. Pannu said that we have returned to an inheritance model where only the wealthy go to university and the ability to achieve is gone. All Albertans need access to post secondary education or we will have a society with people who are not concerned about the consequences of their actions on the community. The only thing worth learning is that which has a value in the marketplace. “Do we want universities to become corporate driven?” asked Dr. Pannu, going on to explain that university education creates the type of society we want to live in – we need arts degrees as much as we need law degrees.

The panel was followed by questions from the audience. Since no PC government representatives accepted the invitation to attend, it was difficult to generate much debate or seek answers on why this government is refusing to adequately fund post-secondary education. However, some interesting thoughts and comments were made. The audience agreed that we should challenge the attitude that Albertans don’t want to fund education. Questions were asked regarding the government push for research, and the system that rewards research rather than teaching – creating a situation where a choice must be made between teaching and doing money-generating research. A comment was made that we’ve moved from an academic institution to “can it be commercialized?” Some discussion revolved around the Telus Centre, a corporate donation that resulted in an operating loss to the university of Alberta of $1.6 million over the last two years.

Fran Trehearne generated the most controversy of the evening, when he commented on the November 10th CAUS Journal advertisement that said that to become a doctor, a university education will cost at least $111,817 on top of living expenses. He stated that his neighbours saw the ad and commented that it sounded like a good deal. The audience response was, “what neighbourhood do YOU live in?”

The forum played an important role in raising awareness of what the major post-secondary tuition issues are, and how they affect each and every one of us. Athabasca University Students’ Union will be participating in the next forum, to be held in Lethbridge on November 22nd.