Columns
The Voice
From My Perspective – The 2nd Annual Peer Support Conference, Part One

Last week I attended the 2nd Annual Peer Support Conference, hosted by the University of Alberta Students’ Union and the Grant McEwan Community College Students’ Union. Peer support groups from universities in Manitoba, Saskatchewan, Alberta and British Columbia were in attendance. These groups provide campus peer counselling on topics ranging from course & career counselling; to date rape, addictions, suicide and stress. Some are operated through their student unions, others through the university counselling department. Student volunteers come from every academic area, receive several weeks of intensive training, and are required to devote a minimum number of hours each week. The U of A Student Distress Centre offers students “a chance to talk to a fellow student with empathy, someone who knows what it is like to face all the pressures of University” (SDC brochure); and the GMCC Distress Centre expands on this, stating, “I am a student like YOU, Not a psychologist or a professional counsellor. I am here to listen and I have been well trained to help you explore some options for dealing with your concerns.” (GMCC brochure)

The conference was extremely well organized and informative, and the information prevented was invaluable for anyone working in, or considering working in, a counselling or helping field. I attended the conference together with the Athabasca University Psychology Students’ Society President Sandra Moore, since we are looking into setting up an online peer support service for AU students. I’d like to share some highlights of the conference, beginning this week with the Saturday sessions.

Joan opened her discourse with a quote from Francis Bacon, “by far the best proof is experience.” This quote underlies her theoretical framework for treatment of eating disorders based on the Alcoholics Anonymous 12-step program, treatment that relies on achieving a sense of spirituality along with peer support through shared experience. Joan’s battle with anorexia began when she was a medical student during the 1960’s. It escalated to the point where her weight had dropped to 78 lbs and she was hospitalized. Although she eventually recovered from the eating disorder, this was soon replaced by addictions to alcohol and work. As she says, “you can be sober from the disorder, but the disease is still in the mind.”

Anorexia has been a recognized disease for hundreds of years, but it is now becoming an epidemic. It has been categorized variably: as a hysterical disease, compulsive disorder, manic-depressive, an addictive disease, a variant of sexual perversion, or borderline personality disorder. It is most commonly found in women, with some 10-20% of university aged women affected. Depression, secrecy and isolation are common, and a good number commit suicide or die from starvation. Anorexia is marked by addiction to food rituals, starvation, and an obsession with maintaining control. Sufferers have a distorted body image and an intense fear of being fat that leads them to obsessions with diet and weight loss. Bulimia is a related eating disorder, marked by an addiction to a binge/purge cycle; and weight control with laxatives, vomiting, fasting, diuretics and exercise. Both are compulsive eating disorders marked by an obsession with food.

Causal factors are relatively unknown, but it is considered an addiction, and has been successfully treated using the addiction model. Joan used a definition of addiction from Anne Wilson Schaef’s “When Society Becomes an Addict”:
– sense of powerlessness
– need to lie, cover over the behaviour
– progressive self-destruction
– doing things inconsistent with one’s value system
– driven to act in certain ways
– tolerance developed, withdrawal symptoms experienced
– chronic disease that will eventually kill you

In her own recovery, Joan surrendered control to a higher power, the vital spiritual experience of the AA 12-step model. This is not a religious thing, as Joan said, “religion is for people scared of going to hell – spirituality is for those who have been there.” This spiritual experience is a mental rearrangement of thinking patterns and ideas that allows a person to give up the addiction. The real drug of eating disorders is the illusion of control over painful feelings. By giving over that control to a higher power and receiving the support of Eating Disorder Anonymous meetings, Joan has been able to heal, and she uses her personal knowledge and experience to help clients.

What I found most compelling about this discourse was the connection between eating disorders and addictions, and the inability of sufferers to control their behaviour. The security found in a single binge event, or in an obsessive control of quantities of food consumed, reduces the level of emotional and mental pain. The illusion of control is a powerful drug that eases the pain. Anorexia is a chronic disease that kills, and it is on the rise among young women. Further research into cause and treatment needs to be done.

Theresa presented a passionate and empathetic look at the aftermath of suicide, and I found this session profoundly moving. “Suicide is a thief,” that steals people and damages families, and suicide bereavement is very different from other deaths. One of the most difficult aspects of a loss by suicide is that there is no place to focus anger – it is difficult to love and hate at the same time. In addition, suicide is shrouded in secrecy, and this often hampers the grieving process.

In Alberta, suicide is the #1 injury-related cause of death (33%). Last year some 400 suicides were completed in Alberta. Of these 40% were male, and the majority were men over 30, rather than teenagers. Actual rates may be somewhat higher, since the medical examiner is often extremely cautious to identify a death as suicide due to the extreme secrecy and stigma. Car crashes or high risk behaviour resulting in death are often deliberate acts intended to kill, yet not identified as suicides.

The impact on survivors is profound. Grief is physically exhausting – one hour of intense grief is equivalent to eight hours intense labour. Behaviour patterns are disrupted, sleep and appetite problems, nightmares, acting out, and substance abuse are common. Feelings range from guilt to blame, sad to angry, hopelessness, helplessness, frustration, fear and apathy. Self-loathing and blame often occurs; the survivor questions why they were not good enough to prevent the suicide and feels they are an inadequate parent or partner. Suicide notes are rarely left, and friends and family are generally left asking, “why?”- a question they will never know the answer to. There may even be a guilty feeling of relief, particularly in cases where the person had been suffering mental illness or addictions, perhaps creating disruption and stress on the family, or even harming others with their behaviour.

Secrecy isolates survivors, and families are torn apart by blame, stigma and shame. Memories of the deceased lack perspective – they may be alternately glorified or vilified, and mourners are stuck in their anger. Sadly, access to stepchildren and grandchildren is often lost when families blame parents or spouses for the suicide.

The grieving process is hampered by secrecy, and often we do not know how to help someone cope with the trauma. It is important to be able to listen without judging, and talk about the deceased, using their name. Remember good and bad times, and encourage talking about all aspects of the loss if the bereaved person wishes to do so. Ask about their own suicidal feelings, and remember that there is no right way to grieve – each person must work through it their own way and at their own pace.

There are often clues to suicide, but most of the time these are only seen in hindsight. Verbal cues may exist, both direct (everyone would be better off if I were dead) or indirect (giving away possessions); behavioural cues, such as a drastic change in normal behaviour; or situational cues, such as having experienced significant stress or recent loss.

How to help someone who is suicidal? Ask direct questions, such as “have you thought about suicide?” Stay calm and listen without judging. Don’t try to talk them out of it, but try and help them find positives. Take them seriously and do not agree to keep it secret. Make a contract with them – they agree not to harm themselves without talking to someone first.

One of the most important things I had reinforced for me at this session was the need to lift the silence surrounding suicide. People who commit suicide see no other way out, and their pain is so great that they may sincerely believe that their loved ones would be better off without them. Survivors need to speak out and be recognized. We need to remove the stigma of death by suicide, stop hiding it as a shameful secret, and treat both deceased and bereaved with greater understanding and compassion.

This was a session I had recently attended when starting my new job, so most of what Blayne discussed was familiar. I’ve addressed the addictions topic in detail in Voice issues August 28, September 4, and September 11, so I won’t provide any details of this session here. Blayne’s presentation, and the discussion that followed, brought home the serious problem of addictions among on-campus university students, a problem which may well exist among AU students as well. The audience had many questions about date rape drugs, since on many campuses this is a significant problem. I recently came across a news article about specially-treated coasters that many universities are handing out to students, coasters that can “tell if a drink is spiked.” The article also mentioned that females are not the only ones at risk – males are often robbed or assaulted after being drugged (Payne, 2002).

By the end of the day I was exhausted and overwhelmed by the sheer volume of information received, but eagerly looking forward to the next day’s sessions. In particular I was keen to hear keynote speaker, Darrin Hagen. Darrin is a local TV host (Access TV), actor and author – who also happens to be a gay drag “queen.” Having seen Darrin on Help TV, I expected an extremely interesting session, and I was not disappointed!

U of A Faculty of Extension. Eating Disorders, Dr. Joan Johnston
http://karl.srv.ualberta.ca:50000/extweb/owa/summary_result?Program=ASCP

Debbie is a native Edmontonian, and a single parent with four daughters. She has worked as a professional musician for most of her life, and has enjoyed a rich variety of life experiences – with many more to come! Debbie is working towards an eventual doctorate in psychology, and currently serves as the president of the Athabasca University 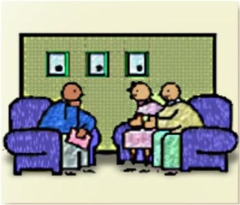