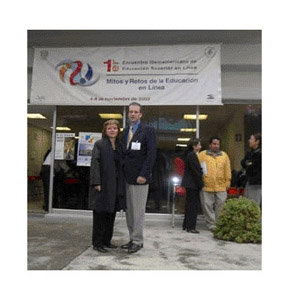 Pierre Wilhelm from the School of Business reports that he was fortunate to attend the first meeting of online Latin American universities organized by the Universidad Nacional Autonoma de Mexico (UNAM) to mark 30 years of distance education in Mexico. This meeting was held from November 4 to 8 at UNAM’s “Coordinacion de Universidad Abierta y Educacion a Distancia.” Many guests who could not attend in person participated from Mexico, Latin America, and Europe via the Internet (see: http://www.30aniversario.sua.unam.mx/) and by way of satellite and cable communications.

The “Primer Encuentro Iberamericano de Educacion Superior en Linea” featured speakers from Spain and the Americas who discussed the theme of myths and challenges in online education for over three days. Pierre experienced presenting a conference paper online and answered questions by way of a “listserver” and “chat room.” He says he was quite pleased with this novel and informal approach to “conferencing.”

Many conference members expressed keen interest in collaborating with Athabasca University in the near future in order to further research and development in distance education. Amongst these, Dr. Juan José Sánchez Sosa, General Secretary of the Union de Universidades de America Latina (see: http://www.unam.mx/udual), which represents over 160 Latin-American universities.