I’ve always found it humorous that tourists to Canada make assumptions about Canadian way of life – -both the way we live and the environment in which we live. I grew up in rural towns, and wildlife and forests were not such a novelty; we respected the more harsh aspects of our living conditions, and were wary of potential dangers of weather and nature. Many a time I have sat with friends in the service industry and laughed at the silliness of visitors who arrive in July with full vehicle loads of ski equipment, who then ask directions to the nearest ski hill. Or poked a bit of fun at those who arrive with long underwear and need directions to a place where they can purchase shorts and t-shirts. I’ve even had a few chuckles over those surprised by the fact that we’ve had running water and electricity. Camping, however, is where the egotistical attitudes set in about respect for wild life and the absurdity of those who arrive and want pictures of their children feeding sandwiches to bears, or with their arms draped lovingly around the neck of an elk. 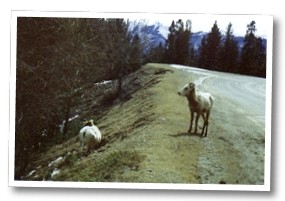 I’m not sure when I became citified and less careful: as a frequent summer camper who is particular about placement of food which may draw wildlife, and equally careful about waste and other safety precautions I had believed I was, as other Canadians, smarter about my interactions with the wild. Unfortunately, I have been blessed with a tourist gene, which suddenly came to life the other weekend while I was at the AUSU Council retreat in Banff.

My first degree is in painting, and every so often I paint wildlife pictures for my parents for special occasions such as Christmas and anniversaries. My mother had expressed an interest in having a painting done of a mountain sheep or goat that would invariably match her sofa. As a dutiful daughter, I began this painting some months ago, and have been particularly unhappy with it. Not a wildlife painter as a calling, I haven’t spent much time collecting photos from which to work. I’m ashamed to say I generally steal my source material for such endeavours from calendars, and then place them into a scene of my choice. For this painting, I wanted something different – I didn’t want to cheat; I wanted to provide a painted landscape that I had seen with my own eyes, and an animal whose fur I could remember while I painted in the hairs. My trip to Banff for the council meeting seemed like an ideal solution – there is always wildlife in Banff, supposedly just roaming in the streets. How difficult could it be to snap the pictures I wanted? 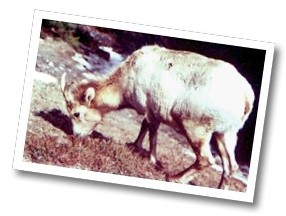 Well, although others had seen elk grazing at the front door of the hotel, I was not one of the ones lucky enough to witness it. No other animals apart from the human variety were crowding the streets, and I took a tip from one of the others on the trip that a lake not far out of town had been the sight of many wild mountain goats the day before. Meetings completed and behind me, I decided to see if I could find the lake on my way out of town.

The directions were simple and the view was breath taking in spite of the overcast day, and I found two mountain goats within 15 minutes. I was armed with my camera and high-speed film, and parked the car to begin taking my pictures. Soon I was out of the car, and across the road from my photo subjects. When they both turned away from me, and all I was getting through my lens was two none-to-clean little furry behinds, I figured it was about time to cross the road – although I was perfectly willing to give them the ten feet or so of personal space that would no doubt keep me safe. 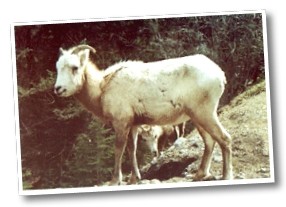 The two goats didn’t seem particularly disturbed as I headed towards them; one even took a few steps onto the road towards me. I took several pictures of him before deciding I wanted to get some of his companion who was placed more aesthetically in front of some trees. The ten feet was rapidly dwindling as I edged closer and closer to the goat, and soon I was doing the stupid tricks I do when I take pictures of my cats, with finger snapping and whistling to get them to turn this way and that as I shot through my film. This goat, however, was either far less gullible than my cats, or didn’t realize (as I’m sure my cats do) that if they respond, I go away quicker, for he refused to turn his head toward the insane noises I was making. I realized that to get the shot I wanted, I was going to have to edge down the incline on the side of the road and shoot the goat from below. As I was picking my way down the hill, focussing through my camera as I went so I’d be ready when the perfect shot arrived, I began to slide. Typical tourist fashion, my first concern was for the camera around my neck, and I twisted myself to fall backwards, holding the camera with one hand and the other groping backwards to break my fall. Instead of getting the handful or dirt and gravel I was expecting, I ended up with a fairly close handful of fur. I screamed a little girly scream as I swivelled around to find the goat from the road had snuck up behind me, and had not only broken my fall but I was still leaning rather heavily on him. 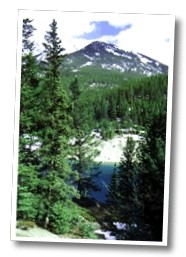 I did get some great shots and a funny story, and hopefully I have a good original painting for my mom to boot. I’m glad I didn’t get a buttful of goat horns. I guess this year I won’t be doing any snickering around the campfire this year:

Photos are the results of the above story — T. Moore 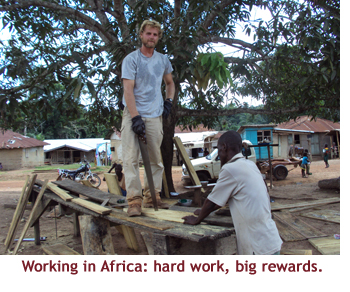