One Who Gets It..

Federal Finance Minister John Manley was recently at a public meeting seeking comments into the development of the new federal budget. While there he had some harsh words to say (SEE: http://www.canada.com/edmonton/story.asp?id={28031263-CB78-4FB1-BB18-560F6AA8D032})about provinces that are under-funding their universities. He looked at Ireland, which until recently had a very depressed economy. However, their economy has turned around and a burgeoning high-tech industry is forming, no doubt due in part to the government’s plan to provide free university tuition to any who desire it.

By giving itself a skilled and educated workforce, Ireland became ripe for high-tech investors to come in; investment which allowed for corporate taxes to be lowered, thus encouraging more investment, and starting Ireland on a spiral to prosperity.

“I advocate everybody getting access, who’s qualified, to post-secondary education. I think it’s of crucial importance to the future of Canada,” said Manley according to the Edmonton Journal. It only makes sense; Statistics Canada has shown repeatedly that there is a definite correlation between a well-educated populace and a populace that is productive, healthy, and happy.

Unfortunately, Manley feels that his hands are tied by the system of Federal Transfers that now takes place. The Federal Government used to provide separate transfers to the provinces for education, health, and welfare, but in 1995 combined them all into one lump sum that it then proceeded to slash – transfers which are just now starting to gain ground on the 1995 levels. Also, Manley has also stated that the top priority for the federal government in this upcoming budget will be health-care. So even though he understands the importance of education, he still does not seem to fully understand the benefit.

The best way to aid our health-care system is to help people not get sick in the first place. As long as the population continues to grow, anything else is really only a temporary measure. One of the best ways to help people not get sick is to make sure they have a good education, not only about their health and lifestyle, but also about life in general so that they can get a good job and afford the quality of lifestyle that helps people to stay healthy. In short, make sure they can get a post-secondary education.

Alberta Premier Ralph Klein held his 10th annual address (SEE: http://www.gov.ab.ca/premier/address2003/content/page_complete.cfm)to Albertans earlier this week, and in it we see the other side of the coin. In his Address, he mentioned Health Care, the Kyoto Agreement, Agriculture, and Infrastructure. His comments on education were restricted to saying that the government is waiting for the report of the Alberta Learning Commission. Unfortunately for post-secondary education, the Learning Commission’s mandate (SEE: http://www.learningcommission.gov.ab.ca/commission.asp?LID=76) is to conduct a comprehensive review of Alberta’s Kindergarten to Grade 12 education system, and does not extend at all to post-secondary education.

In short, Premier Klein apparently feels that post-secondary education is not even worth mentioning – assuming that it entered his thoughts at all.

Perhaps it would be embarrassing to admit how poorly funded our universities truly are. Perhaps he does not want to acknowledge that while Alberta Student Finance has conceded that $11,000 per year may be necessary to fund a person’s post-secondary education, the lifetime amount available for a 4-year undergraduate degree program is $40,000. Since $11,000 per year multiplied by 4 years comes to somewhat more than $40,000, perhaps he would find it hard to tell Albertans that students in their fourth and most intensive year may be forced to complete it while finding a way to raise an extra $3000. Or perhaps he just does not want to admit to Albertans how the $40,000 total limit (SEE:http://tc.su.ualberta.ca/education/ads/03.pdf) available to students will not even cover the cost of tuition and books for an undergraduate arts degree.

No, if we are to judge by what Premier Klein said in his address, making sure Albertans are well educated is less important than making sure that those in the oil and gas industry are not in any way inconvenienced by the Kyoto Climate Accord. Making sure our own children will be able to take post-secondary education is less important than ensuring that farmers purchase crop insurance so that the province does not have to provide relief if a damaged climate prevents crops from growing. Having post-secondary educated citizens who tend to start their own businesses is less important than promoting long term deals with private companies to handle Alberta’s infrastructure problems – deals that are likely to be quite lucrative for those companies that can afford to do the work.

Premier Klein’s theme for this address was “Good enough is not good enough.” For post-secondary education however, it seems that nothing at all is just fine. 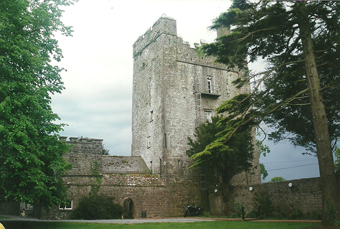 The Haunting of Foulksrath Castle