Part 2 in a continuing series about the Canadian Television talent competition, Popstars: The One.

For part 1of this series, see:
http://www.ausu.org/voice/articles/articledisplay.php?ART=382

Getting Amaya to the Citadel callbacks was a bit easier than the first auditions, but she was still not completely motivated. A second selection of songs had been provided to choose from, but these were not much better than the first. Amaya had finally settled on the Ashanti/Ja Rule duet “Always on Time,” but while she was comfortable with the chorus, she was still trying to memorize the rap part in the car on the way downtown. I had taken the morning off work, and her sisters all came along as well for support.

The Citadel was a buzz of excited young people, all dressed to be noticed. We waited for a long while upstairs, then finally everyone was called down to the theatre. The judges were introduced: Erica Ehm, Jason Rouse, and Paul Myers; and we were advised that random numbers had been assigned and that contestants would be called in singly. As we waited, several of the auditioners tried to intimidate and psych out others by repeatedly going into a hallway around the corner to “practise” loudly. Others just burst into song on the spot, to be rewarded by loud praise and applause from their friends. 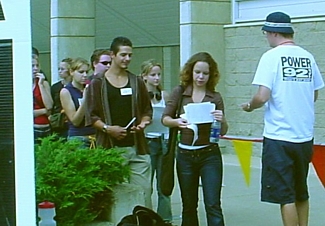 One young man in a Hawaiian shirt had his own media entourage who kept interviewing him, and in between dramatic poses for the camera he would sing snippets of song in his powerful voice. We wondered who he was to deserve such special treatment (we later found out the Edmonton Journalwas doing an article on him).

Everyone was vying for the attention of the Popstars camera crew, who kept popping in and out of the audition room. One girl in a micro mini wearing 4 inch spike heels kept going into the bathroom to change parts of her outfit, and a group of black guys were creating impromptu harmonies outside the audition door.

We sat on the stairs, viewing the carnival-like scene with some cynicism as the hours passed. One thing I had always impressed on my girls through the years was the notion of good sportsmanship and respect for fellow competitors, and although we were well-acquainted with egoistic performers with diva attitudes, it was not pleasant to watch some of these antics. 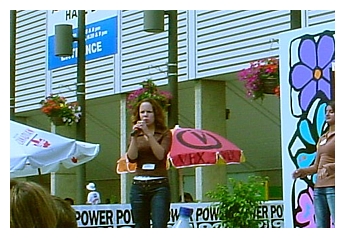 A fellow auditioner had been in the school choir with Amaya some years before, and we struck up a conversation with him and his mother. Amaya was starting to get edgy and began to suggest that maybe we should just leave and forget the whole thing. I was finding myself half agreeing with her, especially watching the emotions of those exiting the audition. As each auditioner went in you could feel the tension increase in the room. Some came out smiling, screaming for joy, announcing they had been called back for the afternoon. Others came out silent, downcast, a few even in tears. Amaya’s choir friend was one of the latter, and his disappointment was so palpable that my heart ached for him.

I thought of an Edmonton Popstar contestant from the previous season, Johnny Collins. He had made it almost to the end, only to be told that he was too strong a solo singer to fit into their notion of the group that would become Velvet Empire. We knew Johnny from many talent shows and performances over the years and he is an amazingly talented young man. I recalled an interview I saw with him after he was rejected by Popstars, in which he expressed that he no longer had much faith in himself and his own talent and would likely be giving up on his musical career. That had deeply saddened me, to see someone with such ability have their “dreams crushed,” as the Popstars’ commercial so proudly advertises.

The morning was almost over, and by this point we were trying to count how many were left in the room to get an idea of how much longer it might be. We just wanted this to be over. I had to leave for work, so I was hoping her number would come soon. At last she was called in. We sent her silent good wishes as we waited on the other side of the door. She came out with a smile – an afternoon callback! She told us that she had completely forgotten the lyrics for the rap portion and ended up just ad libbing the performance, but that they had been very complementary and told her they’d like to have her come back, and this time show them more of the “real Amaya.” Knowing my daughter I wasn’t sure if they could handle the real Amaya!

At that point she finally seemed motivated, actually wanting to do the next audition. They had provided yet another set of song choices to pick from, only one of which Amaya knew the lyrics for – Live’s “Overcome.” Unfortunately I had to leave for work, but I knew she was in good hands with her sisters, and we made arrangements to meet at home later.

I was in training for my new job that day, but of course it was impossible for me to concentrate all afternoon. Finally 5 PM arrived and I headed home. One of my daughters was waiting at the front door with as sad a face as she could muster. She started to announce in a somber voice, “she didn’t make it,” but she couldn’t keep up the charade and started laughing and hugging me. It was quite a birthday gift – Amaya was going to Toronto! 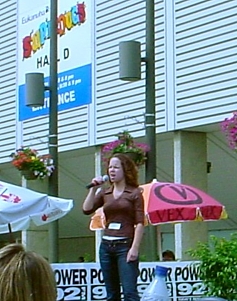 They all eagerly filled me in on the details. Amaya seemed rather stunned and bemused, not having quite expected this. The afternoon callback performances were done in front of both the judges and the other contestants, and Amaya said that everyone who performed was extremely talented. The judges had even commented on how impressed they were at the Edmonton auditions in comparison to other cities they’d been to. At the end they had called them back in individually to give them the news. Amaya was the last one called in, and since they had already picked four finalists, at that point she knew she had made it. Erica Ehm smiled at her and said, “Amaya, the problem is we just don’t know who you are – are you the sweet girl or the rocker girl? So we are sending you to Toronto to find out!”

Strangely enough, now I started to worry a bit. It was thrilling, exciting news, yet I knew how difficult the competition could be in Toronto, and worried that being under the camera lens with her every move scrutinized might be a difficult experience for Amaya. She was no stranger to performing or being in front of the camera, but it had been several years since she was last in that type of limelight and I hoped she could deal with it emotionally and mentally.

It was also a bit strange because we had all been so ambivalent about the whole thing – we had wanted her to have the opportunity but were only too aware of the potential drawbacks. We were confident that she had what it took to go the distance, but we also knew that it was not going to be a test of talent, but rather a media game – with the winner being the person who made “the best television.” What if she didn’t make it? What would rejection do to her? Would it damage her already fragile self-esteem?

Were we ready to see Amaya on weekly television being criticized and having her performance picked apart by people across Canada? Was Amaya ready for it?

Next week: On to Toronto “bootcamp”

Pictures, bios, episode summaries, and other information are available on the Popstars website at http://www.popstars.ca