Articles
The Voice
An Encounter With a Mass Murderer – Part 2

To see him in pictures is not the same – film devours his strange charisma, imprinting only the most inconsequential features of his visage. The resulting photograph depicts someone who looks more like your local insurance salesman than a man who held such power over his disciples that they would risk death or torture by his own hand, just to be near him. Nothing in the photo will explain why more than a dozen women became as his wives and concubines, bore his children, and served him as though he were an earth-bound god. Like other powerful cult leaders – Charles Manson comes to mind – he is also a changeling, who can seem to take on an entirely new face with a change in temper.

He wore a ratty blue sweater, with thready, unraveling cuffs the colour of dirty Wedgwood china. His hair was long and matted, but with not very much gray at the time. His beard was also long, and entwined with the hair so that the two growths became a single mass, and though he looked old, he was still very young.

I recall he wore a pair of limp, medium blue cotton work pants, covered with dust, and a pair of equally dusty leather workboots that had started out black, but now were mostly a dullish brown as much of the outer shell of colour had cracked and worn off.

I recall these boots because the first thing I saw of MoÃ¯se was his feet. I was a shy, nervous child, and usually looked at the floor when out in public, rather than encounter the stares of fawning adults. People who like children have the most unsettling habit of trying to make eye contact with them, smile at them, or ask them simple questions. For a shy child, such attention can be bothersome, or even frightening. Interested strangers always hold a taint of menace for someone too small or young to defend their self – people would do well to remember that.

So, I was looking at the floor, or something on a shelf near the floor, when the greasy old boots stepped into my view. I was immediately startled This stranger in the dirty boots and pants was very close, and facing directly toward me. My mother – a loving but fearful woman – had many times told me to be fearful of strangers who might approach me. Even children have a concept of personal space, and these legs and feet were certainly well within mine.

Like a startled fawn, I was taken from my thoughts about skipper dolls and playing jacks with my cousin, and I froze where I stood and watched intently. Fearfully, I let my eyes drift upward. Up the long legs, and just past the waist, I caught sight of the stranger’s hands – large, brown, dirty hands, with black, cracked fingernails and nicotine colored stains. I also noted his sweater cuffs – unraveled and darkened, like a vagrant’s. In his hands he held a item that was at once incongruous, and yet somehow befitting this man.

It was a doll – a soft bodied doll with long messy yarn hair and a gingham dress. It seemed absurd for this man to be holding a doll, but nevertheless, it was a doll made for such a man. It resembled a Raggedy Andy doll, but instead of bright red yarn for its hair, this one had coarser yarn of a dull, darkened wedgwood blue, much like the man’s sweater. Its body was limp, and under filled, and the white of the dress was darkened and brownish around the edges. Undoubtedly the doll had been in the store for years – probably dropped on the floor and kicked around many times, only to be repeatedly placed back on its perch each night by staff members during clean up. Maybe it even spent some time under the shelves where no one found it for a while. It was not surprising – it was a cheap, rather sad looking doll, and many prettier ones with shining hair and chubby, soft bodies were on the shelves.

This sad, dirty little doll was held out before me, in those big, dirty hands, and I was afraid. My mother told me about men with toys and candy and praises, and how they might come for pretty little girls. As a child I had waist-length platinum hair – I miss my blonde hair now that it’s become thick and auburn – and people used to stop and look at my hair, and sometimes even touch or stroke it. It frightened me to receive such attention, but I came to expect it. Mom rarely let me more than a few feet away from her in public, and I was glad of this.

Mom was not beside me now, however. I was nine years old and starting to move off on my own a little. Not far, but sometimes I’d go to the next aisle from where she was. I knew she would be very near.

Still, I did not run or yell, or look around for my mother. I was afraid to anger the man, and so I stood quite still, but looked up higher yet, to see who he was. It was then that I saw the kinked, bristly hair and flowing beard, and the rugged brown face. But what caught my attention – something that very few photographs have captured – was his strange eyes. They burned blue like the base of a propane flame, but brighter – a harsh, cold colour like glacial ice.

His followers worshipped him like a God, and they say he had an aura of power and knowing. I think it was his eyes that made people crazy and willing to die, or see their own children die, just to be near him. His eyes were strangely beautiful, and his face, utterly peaceful. His gaze was locked directly with mine, in a deep, piercing, questioning stare that grown men do not bestow on little girls. Below his eyes, his face was hard and immobile, but there was something in his look that told me he wanted me to like him, and trust him. He smiled ever so slightly, but his eyes did not smile. He had a power to compel, and used it quite naturally.

I did not know until many years later that, among other things, MoÃ¯se was a pedophile, who enjoyed having sex with his harem of women and their children as well. Some of the women even taught their little girls how to fondle and stroke him to orgasm, such was their desire to please their great leader. It is said that a female psychologist, sent to interview the commune children as part of a social services investigation, learned about the sexuality between MoÃ¯se and the little girls, but came under the madman’s thrall and in her report chastised the government for trying to break up a loving family. She conceded that the children were exposed to sex a little early, but that is all.

It was only a few months later, I am told, that MoÃ¯se and his troupe packed up and moved on. In the later years he committed increasingly heinous crimes against the people who devoted their lives to him. Fancying himself a surgeon and a holy healer, he would get drunk and decide that one of his people – or their children – was in need of an operation. Without benefit of anesthesia, that person would be subjected to an impromptu amputation, appendectomy, castration, disembowelment, tooth extraction, or whatever else Roch Theriault felt like experimenting with on that day. Children were dunked like witches, and nearly drowned in an attempt to disengage the Devil from their bodies, while others where hurled against trees. In his sober moments, Roch cried and repented for causing such harm. Only one person is know to have been murdered by Theriault [she died as the result of one of his “?surgeries’], and a child died of exposure, apparently on Roch’s orders. The list of gruesome tortures that his victims had to endure, however, is startling and unmatched in the history of cult brutality.

Such was the power of his thrall, that his women remained devoted to him for many years after he brutally cut off the arm of one of his wives with a meat cleaver. Later she went on to write the book Savage Messiah, which has recently been made into a film. Three of his wives are devoted to him this day, and regularly make conjugal visits to the prison. He continues to father children while incarcerated.

There have been many people in history that have caused more deaths, but few who have ever reached the level of insanity and brutality of Theriault. That he and his commune summered in my great aunt’s house, across the street from our family home, and that I had such a close brush with the madman himself is still something quite startling and serves as a reminder: evil does exist, and it may be much closer than you know.

New Carlisle is a tiny, peaceful, and beautiful east coast town. The kind of place where nothing bad ever happens. People feel safe in a pretty little town, but never think about what might be going on next door.

Ed Gein [the American serial killer who inspired such movies as Psycho, the Texas Chainsaw Massacre, and Silence of the Lambs] lived in a quiet little Wisconsin town. No one suspected he was killing middle aged women and dressing them out like deer in his tool shed, or that he was actually wearing parts of his victims and decorating his home with their remains. Evil may lurk anywhere:

Amazon listing for the English version of Savage Messiah – includes a review by an actor once hired to play MoÃ¯se:
http://www.amazon.com/exec/obidos/ASIN/0385254407/crimemagazine/103-7783524-5296629
Victims of Violence cult information page: http://www.victimsofviolence.on.ca/research115.html
Miscellaneous compiled information. Sources are not clear, but the picture gallery is interesting: http://sabungan.homestead.com/page39.html
The Movie: MoÃ¯se http://www.christalfilms.com/moise/ 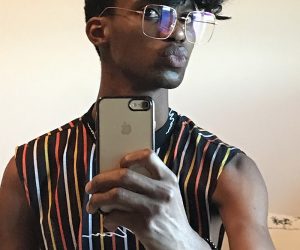