Part 3 in a continuing series about the Canadian Television talent competition, Popstars: The One.

In the weeks following the successful callback, we focused on the upcoming Toronto experience. Along with the other contestants, Amaya had signed a strict confidentiality agreement. The terms dictated that, with the exception of family and close friends, she could not tell anyone that she was going. Details were slow in coming… we were given to understand that she would go to Toronto for the week of September 16th, then if successful through the series of bootcamp cuts, she would remain there for the remainder of the show’s filming.

This left us really up in the air, not able to plan around the month of September/October. The first casualty of this uncertainty was Amaya’s job in a mall retail store. When they went to do up her schedule for the next six weeks, she was forced to tell them she might not be available, but was unable to give specifics, so she was laid off. I had also purchased tickets for a Tool concert on October 6 for Amaya (see From My Perspective, Voice, October 9, 2002). If she ended up staying in Toronto she would miss the concert — but I told her not to worry — one day Tool would be her opening act!

Finally, Lone Eagle Entertainment clarified that she would only be in Toronto for the week and if she made it through the cuts to the final twelve, would be flown back at a later date to finish filming. This at least gave us a bit more of an idea of what was ahead. Amaya and I talked at length about what it would be like in bootcamp. I reminded her that cameras would be on her at all times, and that her every move would be under the microscope, subject to scrutiny not just from the judges but by other finalists. We discussed the possibility of back-stabbing from other contestants, something she was fully prepared for. Her attitude was that this was an experience, something she could enjoy fully and learn from, regardless of the outcome. Although we were confident that she had the talent and ability to go the whole distance, she made it very clear that she did not want to be a “popstar.” I was worried that her ambivalence might cause her to sabotage herself, but she reassured me that she planned on giving it her all and making the most of the opportunity.

Oddly enough Elvis came into our discussions (perhaps because one of the Edmonton contestants was dubbed the Hawaiian Elvis?). We talked about how Elvis was so overweight and mired in drug use, yet managed to stage a phenomenal comeback concert in 1968 by following a rigid training schedule. This inspired Amaya and she decided to start working out daily and pay attention to her diet so that she would be at her absolute best. 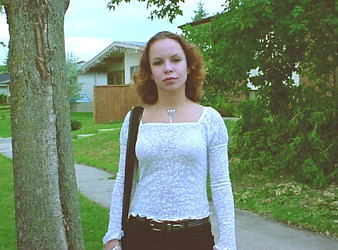 The reluctant Popstar leaves for bootcamp.

Several weeks before departure, I received a call from the producers with her flight information. She was to be at the airport September 14 to catch a 6 AM Air Canada flight. They advised that Amaya should bring a variety of clothing and be prepared to impress the judges – since this would be her week to shine. I had visions of the original baggy pants/boxer underwear outfit she had worn at the open auditions and decided to take her shopping!

We spent far more money than I could afford, but I wanted her to feel confident in her appearance. We traipsed the mall for days making sure she had everything she needed, and the whole venture turned into a wonderful mother-daughter bonding experience, something I would not normally have time for with my hectic schedule.

Finally it was Friday, September 13th. We planned to leave at 3 AM to be at the airport in time. Amaya does not have a great track record when it comes to flying, and has missed flights on several occasions, so I tried to reinforce to her the importance of being ready on time. Friends and family came by to wish her luck, and I was busy hemming pants and helping organize things. At around 10 PM she decided to go with her sister and a friend to visit the Karaoke bar down the street. Although she was putting on a casual and nonchalant front about the whole affair, underneath she was really excited and restless and just couldn’t hang around the house waiting to leave. I knew she wanted to spend some time with her friends to ground herself and build up confidence, so I didn’t argue – I just reminded her to come home early so she wouldn’t miss her flight. She promised to only be gone a few hours, assuring me that she would finish packing when she returned. At around midnight I decided that I should get a few hours sleep so I would be alert to drive to the airport.

At 2:45 AM my daughter came in and woke me up in a panic. Apparently the celebratory atmosphere at the Karaoke bar had distracted Amaya and she was simply refusing to come home, since all her friends were wishing her well, buying her drinks, and begging her to sing “just one more song.” I got up in a hurry, and my daughter returned to the bar. This time she was successful in persuading Amaya to leave and they arrived at the door several minutes later. But Amaya was in no shape to pack. I ran to pick up my other daughter, and between the four of us we urgently threw garments and personal items into the suitcase. In my rush, I grabbed a pile of clean laundry from the laundry room and stuffed it into a bag. The following morning I would learn that this laundry belonged to my youngest daughter – who was quite upset that I had sent it to Toronto with Amaya!

All the way to the airport a tipsy Amaya alternated between being silly/loud/obnoxious and serious/weepy/maudlin. I realized then just how scared she was. In spite of her great show of confidence, inside she was obviously very apprehensive. At the airport we got her checked in, then bought her some water, coffee and food, in an attempt to calm her a bit. In our great rush, she had forgotten batteries for her Walkman, and although we searched the airport in vain, no batteries were available for purchase at 5 AM. She became inordinately upset until the security guard offered to lend her his batteries. She kept thanking him, happy that she’d be able to listen to music on the plane. Unfortunately what she didn’t realize was his loan was only for the purpose of proving to security that the Walkman worked – and he asked for them back once she had passed through the gate!

By the time 6 AM arrived, we were exhausted, worried that her erratic, inebriated excitement might get her kicked off the plane. Her sisters and I breathed a sigh of relief as she finally hugged us goodbye and stepped through the security gate. Upon arrival at home, I checked the phone messages in case she had missed the flight somehow, then went to the Internet to confirm that the flight had departed. It wasn’t until almost 8 AM that I finally relaxed and stopped worrying long enough to go to sleep.

All afternoon we waited for her call. Finally at around 4 PM the phone rang. She had arrived safely and was in Toronto, at the Delta Chelsea. Her roommate was Jocelyn, a young finalist from Calgary, who Amaya said was “very nice.” The Popstars people had met her at the airport, and had given her cash to pay for meals for the day, but nothing would start until the following evening (Sunday), when the rest of the 45 finalists from across Canada arrived. Since she had the evening to herself, she was going to visit a friend in Toronto, and promised to call us the following day.

Pictures, bios, episode summaries, and other information are available on the Popstars website at http://www.popstars.ca