Part 6 in a continuing series about the Canadian Television talent competition, Popstars: The One.

For part one of this series, see: http://www.ausu.org/voice/articles/articledisplay.php?ART=382

On Thursday when Amaya called from bootcamp to advise that she had been cut I was shocked. Everything had sounded so positive the day before: she was excited, said the judges liked her, and it seemed she was poised to go all the way to the final 12. Something seemed very odd about this abrupt change, and she was abnormally subdued on the phone. I asked what the judges had said, and she told me that they just said she should focus on her heavy metal music, since that was really her thing. She told me that Choclair had been given the task of giving her the bad news, and that his voice was all shaky as if he was going to cry. She felt he really didn’t want to cut her.

After watching the show we discovered that it was her peers that voted her off, but at the time we had no way of knowing this. She told me that after she was cut it was like she became a non-person to everyone. It didn’t help that the Popstars people immediately moved her into a separate hotel room for the night so that she would have no further contact with the other contestants. They were sending her home on a flight on Friday at noon. Amaya commented how Jocelyn, her formerly-friendly roommate who had seemed so nice initially, had become quite rude after they announced the cut. Not only did she refuse to even speak to Amaya or answer her questions while she was packing her things, Amaya had the distinct impression that something else was going on. She tried to verbalize it to me, but the best she could come up with was that Jocelyn appeared to be talking about her behind her back. Amaya sounded hurt when telling me this, as if she never expected that her roommate would turn out to be like that.

Later I did discover that there was more going on, and that in fact her roommate had likely been spreading information about Amaya, information that led to the peer vote that removed her. I was not surprised, since I had warned Amaya about this possibility. However, Amaya played a part in it too. Just as I feared, she had made a very poor decision Wednesday night, and gone out with her friend in Toronto (something I only found out about on the Friday). They had been given fairly strict instructions that they were to have no external contact during bootcamp, other than calls home to family. Even so, the producers might have overlooked this lapse, although frowned upon; except that Amaya did not return until the wee hours of the morning. That whole day Thursday she was too tired to even function, let alone give it her best performance-wise. She told me that every chance she had she would go into a corner and lie down and sleep – something that hardly impressed anyone, least of all the judges. To her peers, of course, this was the ultimate sin. Here they were all working so hard to be Popstars while Amaya seemed to not care, and instead was staying out all night and sleeping during rehearsal.

Yet watching the show I was quite surprised that she still managed to give such a credible performance. She danced energetically, impressing the judges with her dance ability and skill at one-handed push-ups. Even her singing was unaffected by her lack of sleep. She told me about having a really cool conversation with Glen Lewis outside of the rehearsal hall. For some reason the name of a book that had affected her profoundly came up, “Conversations With God.” This is not a book many people have read, yet to her surprise, Glen Lewis was one of those who had! She said they found a common bond through this shared experience, since he was also deeply affected upon reading the book.

Although on the one hand I was disappointed that she had been cut, I was also relieved. I knew how torn she was about the whole thing, and I was constantly worried about the effect of the whole experience on her self-esteem. In reading the Popstars’ forum posts, its clear that Amaya had not attracted a lot of fans (at least not among those posting on the forum). While I doubt that these comments are indicative of how people in general viewed her, since the forum posters seem to be mostly friends and family of contestants, I worried at the hurtful tone of some of them. One person labelled her “the Grinch” and criticized her hair. Others called her singing “horrible screaming,” and made fun of her intensity and facial expressions. A few liked her and said really positive things, but they were in the minority.

As we read these comments, I asked Amaya if it bothered her that people would say these things about her. She said, “Mom, I’d rather have people hate me. Hate is a stronger emotion than love, and it takes up more space in people’s thoughts. If they hate me, they will remember me.” We talked about how she seems to be one of those kinds of people who engenders strong emotional responses in others, and how no one becomes successful or famous without detractors – in fact it seems the more successful you are the more they hate you!

We also discussed the issue of her peers voting her out She seemed a bit puzzled at this, since she had not had anything negative to say about any of them throughout, in fact she kept telling us how nice everyone was. It seemed rather ironic since she was so uncomfortable with this aspect of bootcamp. I knew part of the problem was that they didn’t think she really wanted to be there, but I also suspected that Amaya’s attempts to be different had likely rubbed some people the wrong way. We are a conformist society, and the Popstars competition is all about creating a manufactured star that pleases the masses. Amaya’s uniqueness takes some getting used to, as does her sometimes-abrasive personality. The years she was separated from her family and trapped in an abusive relationship have given Amaya a hard, defensive, protective shell that takes people a while to see beyond, and I knew she would not have been comfortable among such a large group of her peers. This was confirmed when I saw the pictures on last weeks episode summary on the Popstars website. This was the first time her picture had appeared on the site, and it’s a lovely one of her wearing her headphones and listening to music. She told me that she wore her headphones most of the time, keeping rather detached from everyone else – something that no doubt contributed to the negative attitudes of the other contestants towards her. 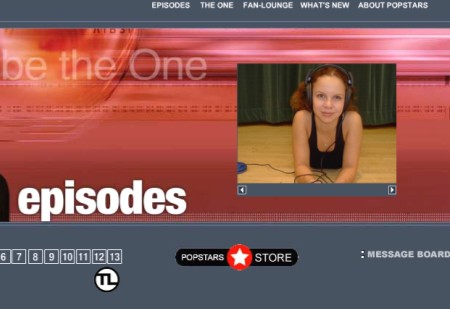 Even though I was disappointed for Amaya that she had been cut, I knew from what she had been saying (not to mention her initial reluctance), that this was not the right place or time for her. While she was enjoying the experience and learning a lot, she was not singing or performing as she wanted to be. Her scorn for the whole manufactured popstar notion was weighing on her heavily, and she was undergoing an inner struggle – wanting to do her best, yet knowing she couldn’t conform to what they wanted of her. She was trying so hard to be different, to resist the manufactured popstar persona, that she pushed things completely opposite and ended up not singing or performing as well as she could have. Had she chosen to, she could have played the game, but she would have lost self-respect and not remained true to herself. She was relieved to be coming home, and I was too.

I told her I loved her and was proud of her and could hardly wait to see her at the airport the next day.

But the adventure was not over yet…