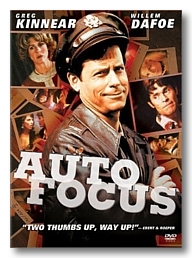 I never thought a movie could pull me into a full depression; that is until I saw the film Auto Focus. This film is about the life of Bob Crane (played astonishingly well by Greg Kinnear), the witty and favourable star of the 1968-1971 television show Hogan’s Heroes. This movie starts out in a pleasant tone, with a happy-go-lucky Bob Crane, and its refreshing 1960s setting. But underneath Crane’s “oh so perfect” life lies a man with an obsession who drives his family, his career, and his charming personality into a self-destructive downward spiral.

I knew very little about Bob Crane before I saw this film and was shocked and surprised by his life behind the television screen. He did start out with a seemingly good life, but underneath it all he was obsessed with photographing and videotaping his sexual endeavours. His sex addiction ended his first marriage after his wife, Anne Crane (played by Rita Wilson), found his girly magazines and nude photos, which he tried to pass off as a “hobby”. This turning point in his life is when he begins to be faced with his addiction, but instead of coming out of it, he continues walking into it.

Crane is quite oblivious that he has a sex addiction, which increasingly gets worse. Most of his conflicts start when his fame surrounds him with women, leading him to strip clubs and womanizing. Crane was not flying solo in his obsessions. One of the main reasons he was so drawn into this sexual behaviour is his relationship with his confidant, John Carpenter (played by the brilliant William Dafoe). Dafoe does an amazingly convincing job as a sleazy, electronic guru who shares Crane’s passion for sex. The two of them create a friendship that is based on all kinds of strange sexual behaviour. As much as I didnÂ¡Â¦t care for Carpenter, I couldnÂ¡Â¦t help but feel sorry for him, since he is very much CraneÂ¡Â¦s underdog.

Crane did not only ruin in his first marriage, but also ended up neglecting his very open-minded, second wife, Patricia Crane (played by the stunning Maria Bello). As another marriage was failing once again, his career was failing as well; people were very wary to hire him. His life going to shambles becomes a common theme in this film, which just keeps escalating. I found myself waiting for Crane to get a break, or to realize the magnitude of his illness. Unfortunately, it appears that Bob CraneÂ¡Â¦s life was rather hopeless.

The actors in Auto Focus are truly amazing. This film has a great cast who are all very believable. Kinnear and Dafoe are especially striking, and together they have this amazing chemistry. The distorted passion they share creates a strange bond between them. They even adopted the motto, Â¡Â§A day without sex is a day wastedÂ¡Â¨. Dafoe especially caught my attention. After seeing the movie Spider-Man, every time I would see Dafoe in a movie I would think of The Green Goblin. But in this movie his character was so convincing, that evil super villain Gobby never crossed my mind once. And anyone who was a fan of Hogan’s Heroes will love the characters of Sgt. Schultz (played by Lyle Kanouse) and Col. Klink (played by Kurt Fuller).

Director, Paul Schrader, did an excellent job in depicting Bob Crane’s life. Schrader went through a dark period in his life as well, therefore he was perfect for this directing role. He did an amazing job setting the mood for this film, especially, at about three-quarters of the way through the movie. This is when CraneÂ¡Â¦s life seems to have lost all signs of hope; all that matters to him is sex. At this point, very dreary, almost nauseating music starts, the camera is also very shaky and the film is overexposed. For me, as the viewer, it was agonizing. It was like waiting to lose your lunch, but without any relief. All I could think was, ‘when is this going to end?’ and ‘why would they torture the audience like this?’. But really, it was nothing less than brilliance. It was perfect for depicting how Bob Crane felt: completely stuck in this horrible dark world of mental illness.

This movie is so depressing. I continually waited for a favourable turn of events, except it never happened. It was like being stranded in the middle of the ocean for eons with no sign of land. Bob Crane’s life was sad and pathetic. So, by now you are probably wondering why you would even consider seeing this movie. This isn’t a bad movie. If anything, it depicts his life amazingly well. It’s just that Crane had a depressing life. Whether you were a fan of Hogan’s Heroes, or never even heard of it, this film is worth seeing. In my opinion, Auto Focus is a work of art. So, if you don’t mind watching a film that might have you reaching for the Prozac, check it out.

Auto Focus – Must Know Facts About the Director Paul Schrader
:: Was born on July 22, 1946 in Grand Rapids, Michigan
:: Raised in a strict religious household.
:: Didn’t see his first movie until he was 18 years old.
:: Wrote his first script in 1975: “The Yakuza”
:: Best known as the guy who wrote Taxi Driver
:: One of the original seventies movie brats

Jeanette was born and raised in Edmonton. She has finally found her place as a university student and is working towards a Bachelor of Arts Degree with a very dubious major in English. This movie buff enjoys creative writing and reading all kinds of books. She hopes to work towards being a predominant writer in the entertainment field.