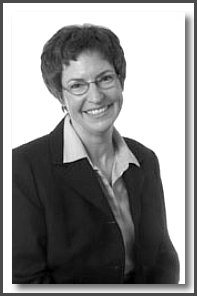 Ms. Romero is presently the Director, Bitumen Production at Canadian Natural Resources Ltd. in Calgary, where she resides. She has served in various leadership roles in the engineering and technology field, including project manager, project leader, and process manager.

She has a wealth of volunteer experience in the community, including a firm commitment to education as demonstrated through substitute teaching, parent advisory, serving as a school trustee, module advising, and facilitating the acquisition of LAN and Internet services.

AUGC thanks outgoing members Jay Smith and Don Kvill for their contribution and service to Governing Council. “The time, effort, and expertise that you shared with us have been very much appreciated.” Their terms expire March 21.

Pat Eagar joined AU on Feb. 24 as our new Vice-President, Finance and Administration. Most recently she was director, Corporate Services, and chief financial officer for the Westview Regional Health Authority (WRHA) in Spruce Grove, AB. Prior to the WRHA, Pat spent 10 years with the Central Vancouver Island Health Region and Nanaimo Regional General Hospital and the Alberta native became more used to rain clouds and flowers in February than blizzards and snow drifts.

Looking out her window at AU Central is a reminder that she has left balmy weather behind, but she doesn’t seem to mind, and is looking forward to the challenge. She says one of the appealing aspects of joining the AU team is that “it is exciting to belong to an organization that wants to lead in its field,” and cites the growth in the marketplace, both in Canada and internationally, and the opportunity for continued expansion as key reasons for accepting the position. 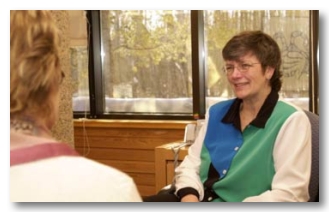 While her experience for the last decade has been in the health care field, she sees similarities in moving to education: both require dealings with governments and restrictive funding. As well, there are many similarities in working closely with professionals, whether they be doctors or academics. She notes that the Alberta Ministry of Learning has a more open, collegial environment than their colleagues in health, and sees this as a positive sign.

She expects her time will be divided between Athabasca and Edmonton since her new position allows for a increased focus at the strategic level, which will include meetings with key stakeholders, such as government, on a regular basis. As well, she sits on the Edmonton chapter of the CMA board, and next year will serve as vice-chair.

Although she will be spending a lot of time in the city, she still looks forward to availing herself of the advantages of small-town life, including golf and swimming. However, her first task is finding somewhere to live that will accommodate visits from her husband, their two sons and a daughter-in-law, and their two Jack Russell terriers. Until then, she will be calling AU home.