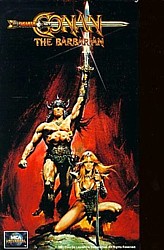 Flipping channels one afternoon I bumped into Arnold Schwarzenegger in a fur outfit. Since much of Alberta was locked in sub zero temperatures and there were fires in the scenes I felt a bit warmer watching. I wondered if I’d previously missed Arnold in One Million Years B.C. but then I remembered he wasn’t in Hollywood when Raquel Welch floored the world in her fur bikini – but that’s another review! No, this was Conan The Barbarian, and I’d never seen it. Here’s my general sum up :unless I’m deathly tired and can’t reach the remote control I’m not planning to watch it again either.

The Movie Central write up describes this film as, “The epic tale of [a] child sold into slavery who grows into a man who seeks revenge against the warlord who massacred his tribe.” Well, fair enough but there’s a lot of nonsense plot missing from that description.

Frankly, I was shocked at what I saw. Not because of the nudity and violence but because goody two-shoes Arnold was in it! I watched as his naked self hopped into two hot love scenes, with two separate naked actresses. The scenes were pretty good, but the rest of the film is a hodgepodge of action, nonsense and muscle. I would consider this a good, “when I’m not busy” film. What that translates to is, “Honey, I’m going to wash my hair:. tell me when the hot stuff comes up:if I’m not dripping:!” The rest is shampoo and condition time.

The beginning of the film is loaded with action – or maybe I should say movement – but is generally without any dialogue. I started to wonder if I was looking at a carefully planned, “look he’s got a thick accent we can’t get rid of so:” cover job but speaking eventually gets going:including from Austrian-accented Arnold.

James Earl Jones portrays the warlord. Eventually he grows up – errr … sort of :and decides to change his early ways of violence to only sporadic “when it suits me” violence and being the high priest of a peculiar temple that worships a two-headed snake the size of a house.

Max Von Sydow is brought into this to throw in some plot for Arnold. He is the incredibly wealthy father of a girl taken away by the mean ol’ James Earl Jones and his temple of snake worshippers. After heaping pretty red plastic (all exactly the same size and shape!) on him:he tells him there is more where it came from if he can bring home his daughter.

Sandahl Bergman plays a petty thief who wins Arnold’s bed -err –heart and then gets temporarily left behind as he goes off to find the missing daughter. She later pulls some much-needed estrogen back into the film.

Philosophy is mixed up in this old 1980s film. James is supposed to believe in his ability more than the sword, but when it suits his character he’s back to violence. Oooops:loophole.

The score is an orchestration of “larger than life” kind of music. The big draw for me was that I didn’t have to listen to the one pop hit that the studio could afford to buy being recycled throughout the film over and over. But then again I’ll ask you “name one song from Conan the Barbarian?” Uh huh … me too.

But let’s face it the point to this film is :well:muscle. Look at Arnold’s arm muscles, his tight backside, his enormous chest size. Sigh: I’d rather look at Jean Claude Van Damme. Sorry. It’s a fun:”I really don’t want to study but I need a break” film. Skip the popcorn:it will only get stuck in your throat when you start laughing – or is that snoring?

Expect to spend two hours and thirty minutes to watch this 1982 nonsense. It’s rated R and will next show March 12.

Flicks & Folios – Which Lie Did I Tell