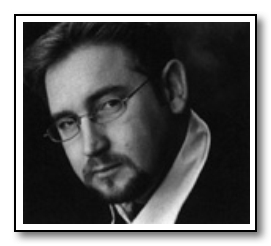 Centre for Language and Literature professor Dave Brundage reports that Vern Thiessen has been hired on an SME (subject matter expert) contract, to help Dave develop English 402: Writing for Performance.

Dave says that Vern has already found some promising sites; and they will be amalgamating these into a senior level course in script writing and critical thinking.

Although this course is to be entirely online, it appears likely that a seminar version of it will also be offered at Grant MacEwan Community College, for students in the Bachelor of Applied Communications in Professional Writing.

Vern is slated to teach the first offering at GMC, and Dave expects considerable excitement to gather when this teaching appointment becomes better known.

And speaking of better known, Vern is becoming familiar to Edmonton theatre goers for his new play, Einstein’s Gift, which is receiving positive reviews (“Grandly ironic, eloquent,” says the Edmonton Journal. “Thiessen’s writing has a lyrical bent …” says the Globe and Mail). It plays at The Citadel until March 16.

A further plug: Dave says that English 402 is a new addition to AU’s steadily evolving staple of creative writing offerings and “we expect it to be practical, fun, and challenging.”

At its March 5th meeting, Academic Council recommended support in principal of the 2003-04 Budget Advisory Committee report. In the report, the committee recommends an operating budget of $62 million. The following are some of the highlights:

Challenges to be faced on the revenue side include modest government grant increases, tuition fee pressure, and the need to generate reserves. On the expenditure side, challenges include significant salary increases, pension underfunding, the ongoing need for technology, managing growth, and program expansion.

The budget will be presented to the Finance Committee today (March 7) and then to Governing Council at its meeting on March 21.

Professor Curtis Clarke isn’t just head of the Criminal Justice program at AU: he also has a daily presence on Court TV Canada. He hosts ‘flow items’ known as Duty Calls that air two to three times each day between regular programming. To create these lead-in segments, Curtis suggests story ideas to producers who make the arrangements, and then he interviews law enforcement officials in the Edmonton area.

He also writes editorials (also known as Duty Calls) that reach a national audience on the Court TV web site (http://www.courttvcanada.ca/dutycalls/index.cfm). In them, he offers commentaries on issues governing public and private policing that Canadians encounter.