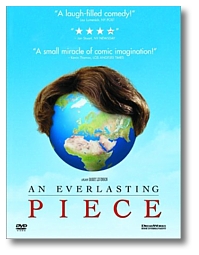 As usual here is the brief description of the film posted by Moviecentral.ca: “Two men from Belfast, one Catholic and one Protestant, become business partners in a wig business.”

I wish I could say that one little line puts this film into perspective, but it doesn’t. The film is delightful in so many ways. Now playing on local movie channels this little treasure shot in Ireland is worth watching.

Academy Award-winning director Barry Levinson, who also did Rain Man, pulled off another offbeat comedy so well. (Many film buffs may know that Rain Man went through several attempts to be made and that several people were attached to the directing process. Problems abounded and too many “nay sayers” in Hollywood bet the film would not be made. Thankfully, it was.)

Barry Levinson directed Barry McEvoy’s screenplay. McEvoy also stars as Colm, a Catholic with a family that belongs in classic comedy. The family is a diverse little brood of funny folk living under one roof. Lovely touches abound in the film. Colm’s mother wears men’s cotton underwear on her head when she lights up a cigarette to keep the smoke from changing her hair colour!

Brian F. O’Byrne (a Tony nominee for The Beauty Queen of Leenane on Broadway) stars as George. George is not so heavily flushed out with his family but is integral to the film to show Colm’ s life. Happily his character is the best friend of Colm. Neither of them pushes the other aside because of their religious differences. That in itself is heartening as so many films and TV productions take the easy way out on characters and would easily make the Irish setting a case of Catholic against Protestant.

Anna Friel (from Broadway’s Closer) comes in as Bronagh. She is Colm’s girlfriend and handles tough problems quickly and efficiently though somewhat indelicately. Her character is also used to explain the demographics of the situation in Ireland. Although the entire situation is “glossed over” into a simplistic view, it is obvious that a complex issue like this would not lend itself to a comedy unless handled that way.

Popular Scottish comedian Billy Connolly (Mrs. Brown, Indecent Proposal) comes in for a cute addition. Connolly fans should be aware that he is doing yet another wild character but he is not central to the film.

How about some plot now?

Against the turbulent backdrop of Belfast in the 1980s, two fellow barbers – Colm, a Catholic, and George, a Protestant – form an unlikely partnership to corner the toupee market in Northern Ireland. But with a rival hairpiece company, Toupee or Not Toupee, getting a jump on the competition, Colm and George have to come up with some creative sales techniques to bring a different kind of “piece” to Northern Ireland.

The film stretches our understandings of Ireland. No longer is the country shown as only inhabited by angry people concerned with genealogy and religion, but as a country filled with characters and real people.

Composer Hans Zimmer agreed to write the score for the over-budget film for a fee of one dollar, as a favour to director and friend Barry Levinson. (SOURCE: New York Daily News).

Although many people have trouble figuring out what actors with accents are saying I recommend this film anyway. I saw such ability to take the situation of a country steeped in centuries of anger and twist the focus around to a diverse group of people just getting by. This left me in tears – from laughter at the well-scripted way this was handled.

One particular scene jumps to mind. The IRA gets hold of George and Colm on a dark night. Wearing balaclavas to disguise themselves they begin sounding like typical bullies. They are armed and a group of thugs on a lonely road – when you’re lost that can be mighty scary. George and Colm eventually have to show them the contents of their car to prove they are indeed selling toupees to the locals. A cute argument starts over whether one of their customers is really bald or not. As the head thug of the IRA sees the wigs he starts to ponder whether he might be able to look good in one. We expect him to steal their merchandise but no:in great comic fashion he buys one. At home he discovers by the bathroom light that it’s the wrong colour and as his wife impatiently waits outside the door as he hastily colours the mop!! Further on he loses the wig when out in the bush! Next he sends the IRA with a monster order for the lads and they don’t know if they can fill it. But WHO would turn down the IRA”?especially when they show up at night, at your home -and dripping wet.

This gem of a film came out in 2000. Expect to spend 2 hours watching and if you can understand the Irish accents you won’t want popcorn to choke you. In my book, this film is a crack up!