Columns
The Voice
Flicks & Folios – Book Review: The Cat Who Brought Down The House 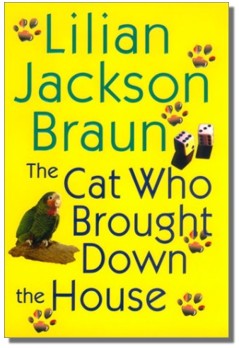 Lillian Jackson Braun is the author of more than 20 “Cat Who:” books. Each of the titles begins with “The Cat Who:” and have a variety of endings. She has garnered an incredible following with her stories that star the delightful cats, Koko (short for the nightmarish name of Kao K’o Kung) and Yum Yum, and the man whom they allow to live with them, journalist Jim Qwilleran, a.k.a “Q”.

The following passage gives you a quick idea of the mystery writer’s style:

“Koko never ceases to amaze me: He knew someone was going to break in, and he knew far enough in advance to get upstairs and wake me up. The way he threw himself against my door, it’s a wonder he didn’t break every bone in his body. The fantastic thing is: he pushed his commode to a spot where the guy was sure to trip over it.” (The Cat Who Played Post Office pgs. 253-54)

Braun says her success is because “people are simply tired of all the blood. I write what is called the classic mystery.” She says while “not all mystery fans may like cats, all cat-fanciers seem to like mysteries. That makes for a large audience, since 26% of all American households own 53.9 million cats between them.” Braun was the “Good Living” editor of The Detroit Free Press for 29 years. Like her character “Q” she was a journalist. Q is retired but continues to write a regular column in the Moose County Something, while Lillian is retired and writes mysteries full-time. She lives with two Siamese cats (neither named Koko or Yum Yum) and her husband, Earl Bettinger, in North Carolina.

We are told in each book that Koko has extra whiskers. In one book it is even hinted that Koko is an extraterrestrial cat :or maybe just in contact with them with his extra “antennae”. Lillian always toes the line with anything “out of this world”. She sticks to the story and leaves occult themes to sci-fi writers.

Lillian’s latest book, The Cat Who Brought Down the House, isn’t my favorite, but it is a true Cat Who book. All the main and small town quirky characters are present and accounted for. Here’s a small selection of characters you’ll expect to meet:

One of Jim’s neighbors is the weatherman, known as Weatherby Goode. Q’s girlfriend Polly is a librarian and her character is growing in the latest installment. Her billionaire boyfriend has suggested he buy her a little bookstore of her own since she’s worried about the library’s future. After more than 20 books of Polly’s life as a librarian, it’s good to see her character expanding.

Lillian Jackson Braun began writing her Cat Who books in 1966 with the Cat Who Could Read Backwards.

Lillian’s had such a huge following of devoted fans she can’t put her pen down – the fans won’t let her! Her characters are adorable, and her murders keep you turning the pages. Indeed, there are many websites devoted to her works, including reading and fan club members (mostly in the U.S. South).

The plot in her latest book revolves around a former citizen of Moose County who has been living in Hollywood for decades. Thelma Thackery decides to retire in the county she was born in. Well, of course, anyone who knows small town life knows the tongues will start clucking with the rumor mill. The book captures that experience beautifully. Everyone wants to know if she’s a film star, but they’re just as impressed that she ran a successful restaurant.

When a murder drops in, “Q” starts to uncover the problems and finds the murderer. The cats, naturally, figure out who the culprit is ahead of him.

It isn’t a badly written book, just not the best I’ve read. The descriptions of her Siamese cats have changed over the years (“tail tucked in like a loaf of bread” was a favorite of mine) and so has Qwilleran’s character, (from astonishingly poor to billionaire in one book).

Considering there are over 20 books (which I’ve read) to really give you the full scope of these characters and the changes they’ve been through, maybe I should assign you some reading? Kidding!

Anyway, for those of you looking for a great library pickup or a fun read in a pocketbook, consider any of the Cat Who :books. My husband and I love to read them. And this one is fun to add to the collection.

Editorial – The Joy of Pet Ownership