By Stephen Hui, The Peak

BURNABY, B.C. (CUP) — Tempers flared and cries of “shame” filled the room as Simon Fraser University’s board of governors approved a 30 per cent hike in tuition fees – the second such increase in as many years.

“Tuition fee increases pose a real barrier to education,” said Jonathan Silveira, a student member of the board. “Students believe that by increasing tuition and other fees, we will make SFU a place which will emphasize large bank accounts and undervalue the hard work of students working two part-time jobs to make their way through school.”

Silveira and fellow student representative Danny Chen were the only governors to vote against the fee hikes.

“Today is one of the most disappointing days of my life as a student at SFU,” Chen said.

The increase will place the university’s tuition rate at 10 per cent below the national average. Effective the fall semester, the basic undergraduate tuition fee will climb from $95.10 to $123.70 per credit hour. The basic graduate tuition full-time fee unit will rise from $948.35 to $1232.90.

The fee hikes will offset a $9.8 million budget shortfall resulting from a decrease in funding from the provincial government and rising employee costs. 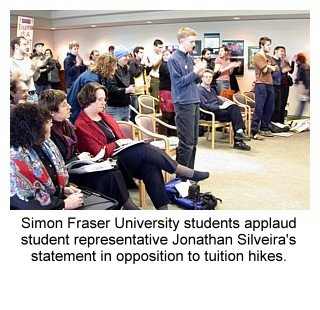 “Someone must be drinking again in Victoria if they think it’s just fine to chop, slash, and axe our funding by over $3.3 million, forcing a fee increase which surpasses 60 per cent over a short two-year period,” Silveira said.

Twenty-five per cent of the tuition increase will be set aside for scholarships and bursaries – as was the case with last year’s tuition hike.

“Improving scholarships and bursaries is an integral part of our approach to tuition increases,” said Michael Stevenson, president and vice chancellor of the university. “This will allow students eligible for bursaries to receive a significantly greater proportion than previously.”

Tuition and ancillary fees have shot up at postsecondary institutions across British Columbia since the provincial government ended a six-year tuition freeze last year.

SFU’s board of governors is composed of 15 members, including the university’s chancellor, president, two elected faculty members, two elected students, one elected staff member, and eight persons appointed by the provincial government.

All Photos: Stephen Hui / The Peak