There was a decidedly positive energy in the Wedgwood Room of the Fairmont Hotel Macdonald on March 19 as more than 70 AU MBA alumni, students and CIM faculty and staff gathered for the annual AU MBA Edmonton Alumni and Student Dinner.

The Honourable Murray Smith, Alberta’s Minister of Energy, provided a snapshot of his ministry’s work on many of Alberta’s critical energy issues – the deregulation of Alberta’s energy marketplace, environmental regulations, energy conservation initiatives and Alberta’s growing role as a ‘safe and secure’ energy provider.

“Alberta’s energy reservoir includes the second largest oil reserves in the world as well as natural gas, coal and electricity,” Smith said. “We also have the expertise, the leadership and the infrastructure to reliably supply energy to our customers within Canada and the United States both now and in the future.”

Minister’s Smith presentation was followed by a lively question and answer session.
Comments from alumni and students reflected the importance of events such as this to build the AU MBA student/alumni community and keep alumni connections alive. 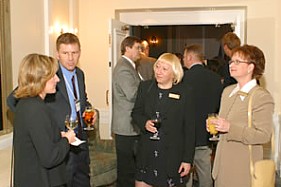 INSECTS, SPIDERS AND OTHER THINGS NICE?

Terry Thormin of the Alberta Provincial Museum’s Bug Room will be presenting Alberta Bugs: The Good, The Bad and the Ugly on April 8 from 7-9 pm at the Nancy Appleby Theatre in Athabasca.

From giant waterbugs to sawtoothed grain beetles, Terry will show slides and talk about insects and other arthropods about which the public regularly asks him questions. Following the presentation, Terry, assisted by members of Science Outreach – Athabasca, will show you some live exotic animals from the Bug Room Gallery and answer questions about insects in general.

Terry has worked for Alberta Provincial Museum for 25 years, currently as an entomologist and supervisor of The Bug Room. He is a naturalist specializing in birds, insects and plants and has traveled extensively in the American tropics. He has appeared on CBC Radio, and many television stations, including the Discovery Channel.

The next presentation by Science Outreach – Athabasca:

To help support expenses, admission will be charged for these two presentations: $3 – children (2 and under free) and $5 – adults. Tickets can be obtained from Athabasca IDA, Value Drug Mart, or members of Science Outreach – Athabasca: Linda Lindballe (6653), Robert Holmberg (6203) or Wayne Brehaut (6737). For more information check out the web site ( http://scienceoutreach.ab.ca/).