Articles
The Voice
War Kills More Than A Body

Humankind has witnessed all kinds of disasters ranging from floods to plague epidemics, but none have been more ruthless than war and no one has inflicted it upon us but ourselves. With so many things threatening our existence on this planet earth, why do we bother adding one more? Some blame wars on the evil, while others say it is for goodness’ sake.

In the introduction to his book, The Spirit of Man, British poet Robert Bridges defines the importance of faith, hope, and peace and thus justified the actions taken by his country men in the First World War to preserve the higher cause of freedom and honour.

Britons have ever fought well for their country, and their country’s Cause is the high Cause of Freedom and Honour. …We can therefore be happy in our sorrows, happy even in the death of our beloved who fall in the fight; for they die nobly, as heroes and saints die, with hearts and hands unstained by hatred or wrong.
(Robert Bridges, 1916; 20th Century Poetry and War)

Since World War Two, more than 250 wars have been fought and these have claimed 23million lives; countless kids have became orphans and millions have lost their homes (PPU). 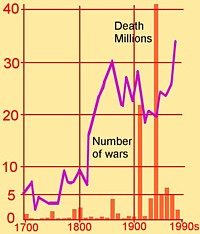 This table, adapted from the Peace Pledge Union’s website (Britain), show the rising trend in both the frequency and destructiveness of war. Since 1700 there have been over 480 wars (conflicts with deaths of 1,000 or more per year), resulting in over 120,000,000 deaths.

Let’s journey back in time to see what factors set the stage for war, and how the post war era changed the face of the world for the better or for the worse.

The conventional battle of World War One lasted from 1914 to 1918, and consisted of two sides – the Allied Powers, which included France, Great Britain, Russia, and the United States and the Central Powers, comprised of Germany, Austria-Hungary, and the Turkish Empire (LiveStation).

World War One started as a conflict between two nations – Austria-Hungary and Serbia – but its domino effect dragged one nation after another into the battle. The following factors set the stage for the very first world war. (First World War.com)

1)The assassination of Archduke Franz Ferdinand, heir to the Austro-Hungarian throne. A Serbian nationalist secret society, also called the Black Hand, was suspected in the assassination, which resulted in a declaration of war by Austro-Hungarian”‘s against Serbia on the 28th of July, 1914.
2) The German dream of becoming the greatest power in the world, which started a race of arms production between Germany and Britain.
3) The a French desire to avenge its 1871 defeat by Germany.
4) Russia’s desire to restore its prestige, which was lost in the battering it took from Japan in 1905.

These diverse factors worked together to create a mass of hostility, and led to increasingly destructive actions by a number of countries. The devastating domino-effect looked like this:

:: Russia, bound by treaty to Serbia ,announced coalition with Serbia.
:: Germany, allied to Austria-Hungry declared war on Russia.
:: France, bound by treaty to Russia, declared war on Germany and, by extension, on Austria-Hungary.
:: Germany saw an opportunity and invaded neutral Belgium to attack France.
:: Britain and its colonies Australia, Canada, India, New Zealand and the Union of South Africa, allied with France and hence declared war on Germany in support of France.
:: The United States was neutral in the whole conflict until Germany’s policy of unrestricted submarine warfare threatened America’s commercial shipping industry.
:: Japan joined forces with the British led Allies, and was soon followed by Italy.

War’s outcome is anyone’s guess. With so many variables, no one can predict if it will produce a victory or defeat. World War One ruined the existing global economy and brought upon us The Great Depression (1929-1939) but World War Two set the path for greatest economic boom of our times (Samuelson, February 19, 2003). While the main battle may be won, the after effects of the battle may be devastating.

World War Two’s origin lies in events which took place long before the war started. Some say it was a continuation of World War One and an outcome of anger built up in Nazi Germany because of the 1919 Peace Treaty of Versailles. The treaty effectively ended WW1, but Germany signed only under extreme duress, and resented the many exorbitant demands and restrictions to which they were then forced to comply. (see: Treaty of Versailles links below).

Under the Treaty of Versailles, Germany suffered:

a) Territorial losses, e.g. Germany lost its city of Danzig.
b) Massive military losses, e.g. Germany was not allowed to have any military resources within 30 miles of the east bank of the river in the Rhineland. Germany was no longer permitted to have air force or naval units, and its overall military was reduced significantly.
c) Financial losses, due to lost of vital industrial territory and other financial penalties like reparations to France and Belgium.
d) But the biggest humiliation for the Germans in the Treaty of Versailles was the War Guilt Clause, which declared Germany responsible for all the damage caused during the war and forced Germany to pay reparations for war damage at an amount not yet determined at the time of the Treaty signing.

Hitler later took advantage of above losses and manipulated the idea of Nationalism. Germany’s invasions were his actions to Germany’s lost pride and also to take revenge upon those who took part in weakening of Germany. As a result:

:: The Second World War started on the 15th of March, 1939, when the German army invaded Czechoslovakia.
:: Britain and France then pledged support to Poland, when Germany demanded their lost city of Danzig (now in Poland) on the 3rd of September, 1939.
:: Ultimately, the battle escalated and more countries became involved, until on the 6th of August , 1945, the first Atom bomb was dropped on Hiroshima (by the United States Air force), and the second, shortly after, on Nagasaki, in retaliation for Japan’s destruction of Pearl Harbor.
:: The Second World War came to an end with the surrender of the Japanese in Tokyo Bay on the 2nd of September, 1945 (see: The Second World War Encyclopaedia, link below).

The American economy benefited from the demand for military products at the very start of Second World War but the Vietnam War had the opposite effect. The Vietnam War started when the U.S. economy was at its peak, but following the war America suffered high inflation due to excessive wartime spending (Small, 1999).

http://www.worldwar2database.com/html/postwar.htm
In above link one can see how post-war victory was celebrated by the victors, and how sorrow embraced those who lost. A few similarities can be found on both sides: the destruction which came with the promise of rebuilding, lost lives with the promise of remembrance, and children of war given the promise of tomorrow’s peace.

The Iraqi or Gulf War

What are the possible incentives for the Iraqi war, or Gulf War Two?

We are going into this war with hope for a short war and minimal civilian casualties. Like it or not, we are at war again and this time the predicted positive outcomes include:
:: Globalization gains
:: Economical and political modernization, and a curbing of Middle East radicalism.
(Samuelson, February 19, 2003)

However, these gains will come with the price of many negative post war effects, which may not be fully understood until much later:

In the first Gulf war, both Allied and Iraqi soldiers as well as civilians were exposed to many health threatening agents, for example, vaccines, insecticides, and chemical weapon protectives – these same factors may effect soldiers in the current war. One of the greatest threats today is possible use of chemical and biological weapons, such as mustard gas, SARIN (a nerve agent) and VX. The atomic bomb was already used in World War Two, and in this war we can only pray that no atomic or nuclear weapons will be detonated (IPPNW).

The Royal College of Psychiatrists recently issued a released reporting findings that “successive post-war generations of men appear to have an increased risk of suicide, which they carry with them into middle age, according to a new study carried out at the Bristol University. If these trends continue into middle- and old-age, they will lead to increases in overall male suicide rates” (RCP, February 1, 2003).

The world is already facing global economic difficulties such as over-indebted developing countries (i.e., Brazil), economic stagnation in Europe and deflation (decreasing prices) due to cheap product imports from Asia. Over-dependence on the U.S. economy by the rest of the world (it accounted for 64 % of world economic growth from 1995 to 2002), is causing a global economic imbalance (Samuelson, February 19, 2003). How will this war effect the global economy?

The Cost of Freedom Iraq

The price tag of the 1991 Persian Gulf War was $50 to $60 billion but it was shared by U.S led coalition forces like Saudi Arabia, Kuwait, and others. This time cost of actual warfare (the military campaign) in Iraq is estimated at around $93 billion by Congressional Democrats. This figure does not include costs such as U.S. peacekeeping efforts or humanitarian efforts in Iraq, which could end up costing America and its allies between $12 billion and $50 billion (U.S.) each year. If there is an oil crisis, no one knows how much is going to cost
(Pulse 24, February 7, 2003; CNN, January 1, 2003).

The thought of a war is never comforting, whether war is necessary or just forced upon human kind, but we can always hope for peace. As one German soldier once wished as he witnessed a crowd of Russian prisoners:

From Where I Sit – Remember