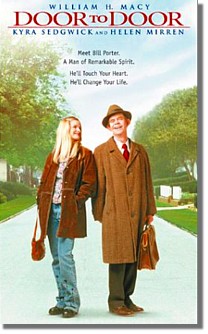 Most of the time I watch films that have able-bodied characters – don’t we all? But Door to Door is a whole different – and delightful – kettle of film. The star, William H. Macy, is the humble, cerebral palsy victim Bill Porter. His appearance won’t win him any Academy Awards but his acting did! His role bowled over every person in the audience at this year’s awards show. If you weren’t JUST remembering Adrian Brodie’s kiss planted on Hallie Berry you might remember William’s award. Fellow academy members wildly supported his win.

As co-author of the script, Mr. Macy is partly responsible for the brilliant moments in this film. There are so many to chose from:

This wonderful, true story is about Bill Porter, who was born in Portland Oregon. The film spans from the beginning of his career in 1955 as a door-to-door salesman right through to his “retirement” in the 1990s. Like any good film, this isn’t about the career points although we do see them : it’s about Bill and his relationships. At first the Watkins Company boss sees him as a waste of time. He doesn’t want to give Bill any kind of job. With slurred speech and a spastic walk he doesn’t impress anyone at first.

His mother is beautifully played by Helen Mirren. She is supportive to Bill but firm. She teaches Bill “patience and persistence.” Bill listens to her and marches back into the Watkins company office and asks for the “worst route” – the one no-one else wants. “What have you got to lose?” he asks. That’s exactly what he’s given. As his mother is older and starting to slip mentally Bill tries a number of times before he can find a safe and healthy place where she will be cared for.

He goes to work and despite a decaying spinal condition keeps it up. We follow his clients over the years and the ridiculous problems he had to deal with to get sales. But these ridiculous moments feed the film; they fill it with laughter and tears and draw us even more magically into his world.

When Bill is told by his doctor to stop making his own deliveries he complies as best he can. Since Bill walks 8-10 miles a day just doing his route is badly affecting his spine. But since he wins one Salesman of the Year award after another he doesn’t want to quit. He loves his work. He puts up an ad for a delivery person but a young man freaks out at the sound and sight of Bill.

Bill has a real knee-jerk reaction to pity. He hates it. He is astonishingly proud of being able to work and he is good at his job. So when a few problems appear with his new employee, Shelley, played by Kyra Sedgewick, he has to fess up and ask for help. The real-life Mrs. Kevin Bacon plays a pretty, curvaceous student who is always there for Bill. Bill has a monster crush on her – what a shame she doesn’t think of him like that! And when Bill attends her graduation it’s pretty clear who she has a crush on: her future husband.

A reclusive alcoholic played by Kathy Baker is the first person to buy Bill’s products. She is the one with a crush on Bill but doesn’t seem to notice. Throughout the film, we see glimpses of the her lonely existence in a small apartment over the years. Bill can always count on a sale to this lonely woman and she always seems to need more: of everything. Years later, in a huge bawl-your-eyes-out moment, Bill goes to the woman’s apartment only to find out from her son and his wife that she is dead. The son shows Bill his mother’s back room FILLED with Watkins Company products, including bag upon bag of carefully wrapped dog treats. Except, as the son points out, “the dog died years ago.” William’s portrayal of Bill Porter’s reaction is exquisite. He handles the moment with a simple blank look, but the overwhelming truth that she has been so loyal shines through his liquid-filled eyes. Me too.

We follow the little tricks of how Bill survived all these years with minimal use of his left hand and, from what we can see, none with his right. The details are lovely. Bill obviously has a great sense of humor and the jokes makes us laugh steadily – even if the jokes are awfully clean – even corny.

Buy popcorn, but also a few Kleenex. And be ready to explode with a great feeling at the end. This film is a treasure. 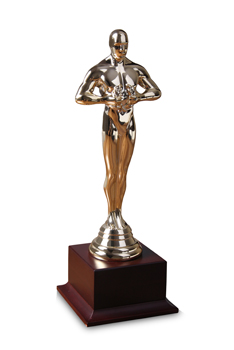