Articles
The Voice
Do You Know The Cembalo? 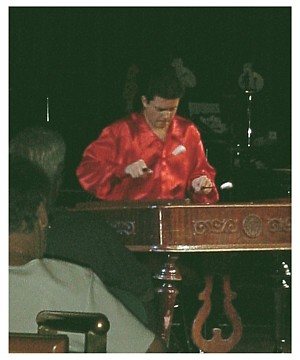 The last two weeks I’ve been on a “special assignment” for The Voice. My husband and I did a transatlantic crossing starting in Ft. Lauderdale, Florida and finished in Genoa, Italy. I’ve decided, since we’re now broke, that I’d write a story to my fellow Athabasca University students to tell you about the entertainment value aboard the Royal Olympia cruise ship, Voyager.

I’m sure you’re wondering about my article title and asking yourself, “what exactly is a cembalo?” The answer is that it’s the unique instrument that Alexander Shura won a gold medal for playing in a recent European competition. He wasn’t competing against other cembalists – each contestant played their particular instrument and Alexander floored the judges. His father is considered king of the cembalo and this young, good-looking 22-year-old is quickly catching up in recognition. His two shows in one evening were outstanding and the instrument is very unique. He played every style of music imaginable, from the Zorba the Greek movie theme to jazz and back to magnificent classical composers. The instrument looks like a cross between a piano and a drum. The strings are hit with padded drumsticks. Interestingly, Alexander was recently clocked at hitting the cembalo at 26 notes a second!

The pride of cruise director Sammi Coneen-Baker, is that she “never repeats a show.” She means it. Each of the twelve nights there is a different program and they all tantalize you in some way. There are comics, dance shows, magicians, exquisite musicians who make your eyes tear up, and fun theme nights like Greek Night.

Let’s peak at some of the other acts:

Bernard Reid is a comic-magician. He’s loud and his humour just borders on “adult”, but Bernard delivers. I don’t know how he managed to do so much on the program. He did two separate shows one night and pulled off some cute things like cutting an audience member’s tie to pieces and then somehow fixing it. Of course because he’s also a comic he had to botch the fix up job a few times and then figure out how to finally deliver. It made us all laugh.

Later in the cruise he did demonstrations on how some of his tricks are done, but the tie trick is his specialty and he keeps the secret locked in tight. He’s also been researching the life of Harry Houdini, the most famous magician of them all. All his research has opened a can of worms. Apparently the last man who wrote a book on Houdini just gathered all the press releases that Houdini himself put out and then compiled them. Apparently, the truth is hugely different. Houdini and his lovely “wife” lived a difficult life and were never legally married. With Houdini a Jew and she a Catholic, no one at that time would marry them and they were forced to say they were wed. Bernard has tracked down documents all over the world for more than 25 years and has done some amazing legwork.

Also on the program as a late addition was passenger, Naomi Ebba-Donner. Naomi is the author of Color For Body and Soul. Naomi introduced colour analysis in Scandinavia in 1983 and developed her own holistic approach to colour, linking it with life changes and spiritual development. Naomi speaks seven languages, has a background in fashion design, teaching and lecturing worldwide. She was the first woman elected to the Board of Junior Chamber International (JCI). She was also next to us in the dining room and is a class act as well as a photography buff by the looks of it. She was always colourfully dressed and had clear ideas of how to help others with the use of colour. (Those of you remembering my article on how we as North Americans are so shy on colour may appreciate her writing even more- see http://www.colorforbodyandsoul.com for more info.)

The dance and stage acts were colourful and energetic, including the Globe Dancers, who were adept at dancing without falling when the sea was lurching from side to side. I was SO nervous on those rough days at sea I would jokingly tell others that Tweety bird had flown into my mind and pulled that gag on Sylvester, where he holds up a drawing of a ship as he stands on the deck railing – “Da sea was wocking and wolling, wolling and wocking, up and down, down and up,” Tweety would say, diving the drawing in time to his lisped words. Sylvester, of course, is duped from eating Tweety and grabs his mouth to run to the side of the ship! But, when the Gilligan’s Island theme jumped in I knew it was time to sober up!

At one point Royal Olympia’s Greek staff showed their immense sense of humour: They scheduled the Academy Award winning “My Big Fat Greek Wedding” (which Larry and I hadn’t seen) and after the funny movie we suddenly understood why our waiters were SO concerned that we finish every bite on our plates!

To date, the entertainment on board the Royal Olympia has been the best I’ve seen. The diversity was amazing. Unfortunately, I could fill several columns with the information on the shows at sea, but I will have to trust that you have enough information to decide whether you will also go on a cruise. If the exotic ports and endless meals aren’t enough to interest you (my thighs will never be the same!) then maybe the on-board shows will tantalize you! No worries, most ships have gyms to keep your body slimmer!