This last weekend I had the opportunity to attend an unusual conference. Unusual for me, since most of the conferences I attend are sponsored by groups addressing general education issues. This weekend, however, I attended the 17th Annual Western Canadian Undergraduate Chemistry Conference in Regina, Saskatchewan. Although it did not contain the word ?education? in the title, I learned far more, in many ways, than I’ve learned at any of the ?Educational? conferences I’ve attended in the last few years, and I’d like to share some important points I took home with me since I believe they are highly relevant for all AU students.

The WCUCC Conference was subtitled, ?Reward your Miracle?. It was hosted by the University of Regina, and is an undergraduate chemistry research conference at which chemistry students across Western Canada have the opportunity to present original research to a jury of academics and peers. Some 45 original research projects were presented, and awards were given in ten categories; with chemistry students from the Universities of Alberta, Calgary, British Columbia (Uvic, UBC, UNBC), Saskatchewan and Manitoba in attendance, along with several smaller University Colleges from each province. My attendance at this conference came as a result of an invitation from one of my daughters, my second eldest. She is graduating this year with an honours degree in chemistry from Concordia University College, and she was going to be presenting her original research project at the conference.

Like many AU students, time with my family has taken second place to my struggle to achieve my dream of a degree, and my involvement with the student union means I am rarely able to spend quality time with my daughters. This has been particularly true during these last few months, during which time I’ve been covering the duties of other executive members.

When my daughter invited me to attend this conference with her to share in her achievement, I was unsure if I’d even be able to manage it, since I was trying to complete courses to meet graduation deadlines, plus I had a CAUS changeover meeting scheduled for the weekend. After some consideration, I decided to go along, even though it meant an 8 hour drive there and a 10 hour drive back within the space of 3 days (I planned to go directly to the CAUS meeting in Nordegg right after). As it turned out, the conference was not just a chance to celebrate my daughter’s achievement, but it was also invaluable to my work on AUSU Council.

At AU we don’t have many opportunities to get involved in research projects, and yet research is integral to our studies, particularly if we are planning on continuing on to masters? studies. AU offers a science degree, and at one point I was considering pursuing a BSc at AU. AU’s Martin Conners holds a research chair in science, astronomy, and the university is expanding into subjects covering various areas of science. This conference was an exciting opportunity to see undergrad students have a chance to present their original research at an international level, something that would be wonderful to see AU students involved in. In addition, it was a chance to mingle with academics and students who are working hard to see their education become something beyond just a degree ?a chance to make their mark on the world! 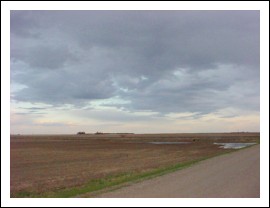 The drive to Regina was as tiring as expected, and I was unimpressed with the city itself. In all fairness, I only really saw the downtown and university areas, but what I saw was deserted and seedy, garbage-strewn and nondescript. The university itself is in a pretty location by a lake, but it is a small, very plain campus. The people, however, were cheerful, hospitable and very helpful; and the conference organizers tried very hard to make it a worthwhile experience.

Because I had registered late for the conference, I was unable to obtain accommodation at the university itself, and we spent the first few hours after arriving in search of a hotel that was half decent ? finally settling on the Holiday Inn a few blocks from the big Regina Casino. At registration, I was given a complete program, and after reading the first few pages, I felt like I was attempting to read a foreign language. On the first day we would hear about, ?Synthesis of ply-hexaflouropropylene oxide propyl alcohol: A precursor to insulated triarylphosphines? (Friesen & Beukema, Trinity Western University); ?Novel dibenzo phenazine based discotic liquid crystals: trends relating electronic nature of subsitutents with ability to form a mesophase? (Jones & Williams, Simon Fraser University); and ?Multiple insertions of xylyl isonitrile into organometallic complexes of scandiaum and yttrium supported by a bulky salcylaldimine ligand? (Phillips, Emslie, Piers & Parvez, University of Calgary); to mention a few. 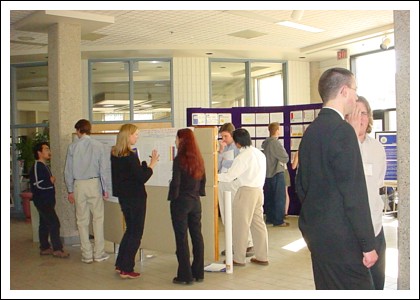 Things got even more interesting the next day with presentations such as, ?Synthesis of flavonoids, chromones and related oxygen heterocycles using cyclizations of acetylenic sulfones (Sorbetti & Back, University of Calgary); ?Crystallization and structure determination of thioredoxin 2 from helicobacter pylori (Filson & Sanders, University of Saskatchewan) and ?Neutral and cationic organoaluminum complexes utilizing a novel chelating amido-phosphinimine Ancillary Ligand (Welch & Peirs, University of Calgary). Some of these presentations were, surprisingly, somewhat boring even for my scientist daughter! There were a few I actually understood ? for example ?chemometric analysis of wines for resveratrol utilizing solid-phase microextraction and gas chromotography/mass spectrometry (Bleakley & Donkor, University College of Cariboo, Kamloops)?well at least I understood the *wine* part!!

I also had a very interesting discussion with J. Ng from the Department of Chemistry at the U of A, regarding her poster presentation entitled, ?Linking first year chemistry to research?. She explained how the U of A is recognizing the importance of making students aware of the importance of research right from the first year. All too often research is seen as a 4th year endeavour, and many students enter the sciences without having a clue as to the relationship between research and their studies. I saw a strong link here to AU. We often enter our studies without really have a sense of where we are going or where we will end up. A first year program of some type that encourages awareness of opportunities, one that helps students to understand the relevance of the courses they are taking, is something we should find ways to implement, and this conference strengthened my resolve in that regard.

But it was not the actual topics being discussed that made an impact. It was the concept of the conference itself, the notion of research, the people involved, and some of the supplementary activities included that really made this conference something beyond the ordinary. We had the chance to tour the RCMP Forensics Lab, *enjoyed* a steak fondue, and I had the opportunity to converse with professors from several of the participating universities, learning even more about the importance of research itself, and how students can best take advantage of opportunities. I discovered some interesting and important ideas about how students should approach the very study of science.

From My Perspective – Life at the top – AUSU Council president 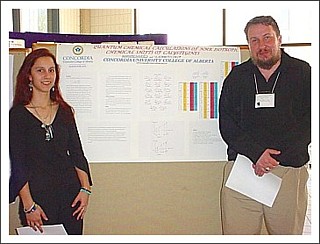 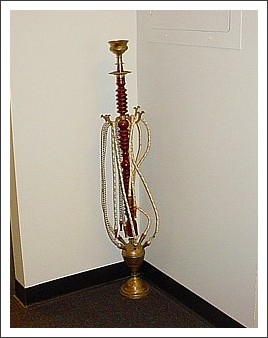