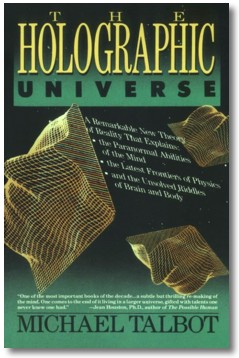 Once in a while a pocketbook comes along that completely blows me away. The Holographic Universe by Michael Talbot is one of those books! Published in 1992 by HarperPerrenial it is an amazing find!

The cover quote is from Jean Houston, Ph.D. author of The Possible Human: “One of the most important books of the decade … a subtle but thrilling re-making of the mind. One comes to the end of it living in a larger universe, gifted with talents one never knew one had.” The quote is not a horn-blowing build up. It is a review of a book that is that interesting and amazing to read.

The back of the book has quotes from Larry Dorsey, M.D. author of Space, Time and Medicine, Lyall Watson, author of Supernature and Fred Alan Wolf, Ph.D., author of Taking the Quantum Leap.

I picked this book up at an Upledger Institute course but I was inundated with reading material at the time. I was also in an AU course and had, as I’m sure you know, a hard time finding recreational reading time. If I had known how amazing this heavily researched book was”?I would have dropped most of my expendable reading material and dug in.

Michael Talbot should not be mistaken for the Miami Vice actor who played the character Switek. That actor has an extra “t” on the end of his name.

The main “problem” with this book was that when I picked up a pencil to start underlining some amazing research from the multiples of physicists, authors, psychologists, psychiatrists and psychics that Talbot quotes throughout, I found that I was marking virtually every line of every page!

Reviews of the book have included such praise as: “A delight for science buffs or anyone interested in the paranormal abilities of the mind, the latest frontiers of physics, and the unsolved riddles of brain and body, The Holographic Universe explores the ways in which our concepts of time, personality, even consciousness, are altered by defining them as holographic” — Booklist.

The start of the book defines a holograph. This descriptions is itself fascinating to read. The author cites the way the idea began and how the idea has been picked up and modified by the scientific community at large. Information is diverse – including topics such as hypnosis, and scientific experiments influencing machinery, time, and energy as well as affects on other humans. Talbot also looks into UFOs, religious experience, and miracles.

Talbot has one point in his corner that I respect enormously. He doesn’t whitewash the references he uses. If someone doesn’t agree with him or a theory doesn’t support his point he doesn’t hide it. Talbot is honest enough to call a spade a sharp pointy thing to dig in a garden with.

While I was reading The Holographic Universe, I was constantly interrupting my husband during TV commercials, reading or sleeping, with snippets from the book. I apologize dear! I am more than a little impressed with this book’s in-depth research and I needed to share the information. You may feel the same way.

In case you can’t tell by now — I recommend this book to anyone involved in related studies or with an interest in psychology, physics, or paranormal research. So many books use a few references but here is one that is cleaning the bookshelves off to find interesting material to add to the text.