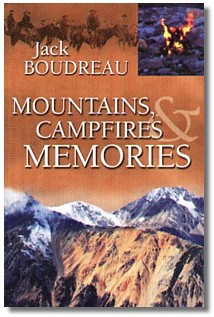 Mountains, Campfires & Memories is the third book that my maternal uncle, Jack Boudreau, has written. The first was Crazy Man’s Creek (reviewed in The Voice, June 20, 2001) and the second was Grizzly Bear Mountain (reviewed in The Voice, July 25, 2001). In his first two books, Jack related dozens of stories of which he had first-hand knowledge, either through his own experiences or those of old trappers, settlers, or hunters that he had interviewed. All three of his books were published by Caitlin Press and are based on the outdoors. The author highlights the hardships suffered by the robust early inhabitants of British Columbia who relied on its unforgiving natural resources for their survival.

I have enjoyed all of Jack’s books, but the first two were especially meaningful to me because they were entirely composed of stories that Jack had either experienced himself or had received from primary participants in the tale. This latest work, however, is an anthology of other writers’ stories, largely taken from early twentieth-century newspapers, and connected through Jack’s colorful commentary. While I thoroughly enjoyed the book and found its contents in line with the style for which Jack has become known, I felt that something was missing from my reading experience and realized that it was the originality of the author’s first two books.

I have no doubt that Jack spent countless hours researching the contents of Mountains, Campfires & Memories and his hard work has paid off with a fine book that will hold strong appeal to the audience that he has built up from his first two best-sellers. While I was personally disappointed with the dearth of familial poignancy that I experienced while reading Crazy Man’s Creek & Grizzly Bear Mountain, I submit that his writing is wonderful and that his latest work is bound to be a best-seller in its own right.

If you enjoy true stories set in early twentieth-century British Columbia “:of adventures gone awry, bizarre encounters with creatures in the wilds, and the results of friendships gone sour.” Or tales of “[w]hen men went missing, or furs were stolen:[causing] :the local police officer or game warden to don his hunting gear to track down the hunter or the hunted,” then Mountains, Campfires & Memories is most definitely a book for you.