Convocation is almost here! For an upcoming Sounding Off column, send us your congratulatory messages for this year’s grads, or, if you are graduating, tell us what convocation means to you!

WORK RAGE – Wayne Benedict talks about the causes of work related violence, and how you can recognize the signs. Read this important article and learn now to make your work environment safer.

AUSU Committees are looking for student members who can volunteer just a few hours a month to answer email or attend teleconferences. Anyone who wants to become more involved with AUSU Student Council can gain great experience and insight through committee work.

The External Committee, chaired by Shirley Barg, needs representatives from Atlantic Canada, Saskatchewan, Manitoba, and Northern Canada. Contact Shirley at sbarg@ausu.org if you would like to get involved, and help improve services to AU students in your area.

The Student Planner Committee needs student input into the design and features of the next AUSU student planner. This is a short term committee, but input into this student gift is extremely valuable. Contact ausu@ausu.org if you are interested.

The Academic Committee was dormant for awhile, but now it’s back up and running under chair Tamra Ross Low. We will be working on ways to help assess student satisfaction with AU’s academic services, and need student input into how we should collect data, and what questions we should be asking. A past project of the Academic Committee was the Course and Program surveys on the AUSU website. If you want to have some input into our next project, contact Tamra at trosslow@ausu.org for more information.

IT’S ALL OVER
THE AUSU 10TH ANNIVERSARY AGM WINDS DOWN

For on-the-scene coverage of the AGM, see Debbie Jabbour’s article 10th Anniversary AGM in this issue.

May 24th marked the 10th anniversary Annual General Meeting of AUSU. This landmark occasion was celebrated as part of an open meeting of the AUSU executive and Council, and all interested student members. Students attended the meeting in person at the Edmonton office, and also via teleconference. Your Voice editor was in attendance over the phone as well.

The meeting began with a welcome message from AUSU President Debbie Jabbour, who also gave a brief overview of how your students’ union was founded back in 1993, and how shaky that first fledgling year was for the newly formed council. 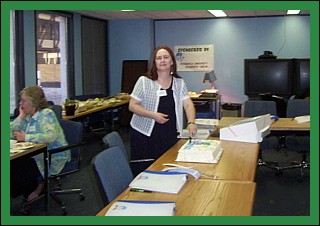 As the Annual General Meeting is the only occasion at which student members may vote on resolutions of Council, student input is of particular importance, and this year students were on hand to provide some valuable insight on the new set of AUSU bylaws.

These bylaws, which replace a set that has been used since 1996, represent nearly two years work. The legislative committee, led by Karl Low, has been primarily responsible for drafting this set of bylaws, but throughout the process all members of AUSU Council have had input into the final draft. Nevertheless, despite the length of time spent on these bylaws and the number of eyes that looked them over, there’s always room for improvement. Thanks to the sharp eyes of the students who attended this year’s AGM, a few small revisions were made and the final version of the new bylaws was unanimously passed by all attendees. Pending approval by the Alberta Government’s Corporate Registry department, these new bylaws will soon come into effect, ending a long term project of this current AUSU council. Next up, council will work on revising the very old and out of date operational policies.

Other items up for discussion at the AGM included AUSU finances for the 2002 financial year. The remaining information presented is mostly contained within the AGM information packet, created for student members of AUSU. This packet will be available online shortly so that any student member may review it, and you can still contact the AUSU office and request a hard copy of the report. As a special treat, all members who receive the packet also receive a photocopy of the very first voice issue, entitled The Paper, which was published in the Spring of 1993. Echoing my recent retrospective editorial, President Debbie Jabbour commented that many articles in that first Voice issue address issues that are strikingly similar to those facing students’ today. A review of this landmark issue shows that for Alberta post-secondary students at least, the more things change, the more they stay the same. 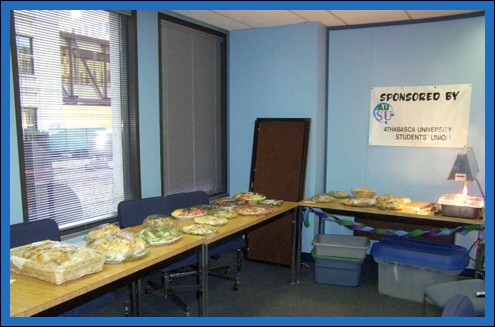 At the end of the meeting, AUSU President Debbie Jabbour invited attending students to say a few words to Council and fellow students regarding their AUSU experience.

Following the Annual General Meeting, students were treated to free food and entertainment courtesy of AUSU, as well as two very special guest speakers — Athabasca University President Dominque Abrioux, and AU Acting VP Academic Judith Hughes, who traveled from Athabasca to speak to the students. Unfortunately, their contribution was not part of the main meeting, so those of us who phoned in and left at the end of the AGM did not hear them. We also missed out on the free food, but those are the breaks when you attend from a distance!.

For superior coverage of this year’s AGM and anniversary celebration, make sure to read Debbie Jabbour’s AGM article this week, and keep your eyes on the AUSU website for a feature page including commentary and photographs from the AGM. 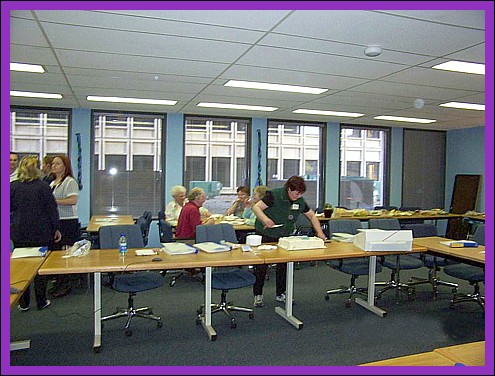 From the perspective of The Voice – which is also celebrating its 10 year anniversary – having this opportunity to delve in to the archives and explore some of the issues that have been facing Athabasca University students since the inception of our union has been both fascinating and illuminating. As important as it is for post secondary students to be aware of the ways in which government, university and student actions can affect the quality and availability of educational opportunities, it is now apparent to me that it is equally important to understand where we have come from so that we don’t repeat the mistakes of the past, or continue taking the same actions expecting a different result.

This anniversary AGM has been an opportunity to explore our past and gain a new perspective on just how challenging it is for many people to obtain a post-secondary education in this province — especially for those who are starting school later in life, who don’t have parental support, or who have financial or familial challenges to overcome. 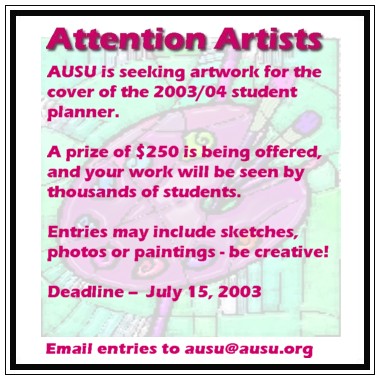 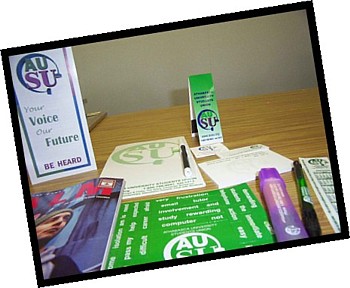 Do you want a package filled with cool AUSU study related items? This year instead of sending out student planners AUSU has compiled a package filled with products to help you study (and in some cases play). We’ve also included in these packages the latest issue of REALM magazine, a magazine geared towards students entering the workforce.
Don’t delay, we only have 1000 packages available. Send Carla an email at ausu@ausu.org or give her a call toll free at 1-800-788-9041. Make sure to include your name, mailing address, student ID# and email address.