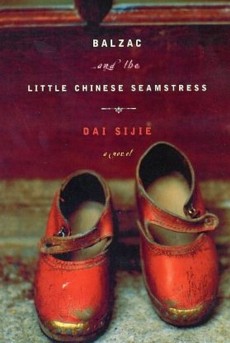 Honestly, I’ll admit I’m usually a very “North American” reader. All of my authors of choice generally write in English as a first language and describe my cultural background. I guess one day that got awfully boring.

Therefore, it is a distinct pleasure to have such a lovely introduction into the world of Chinese authors. Balzac and the Little Chinese Seamstress was my reading material while away on my vacation. I sat for a few minutes each day in between ship activities reading this charming story by author Dai Sijie. The 2001 Anchor Books novel is richly praised.

The descriptive paragraph on the back says, “In this enchanting tale about the magic of reading and the wonder of romantic awakening, two hapless city boys are exiled to a remote mountain village for reeducation during China’s infamous Cultural Revolution. There they meet the daughter of the local tailor and discover a hidden stash of Western classics in Chinese translation. As they flirt with the seamstress and secretly devour these banned works, they find transit from their grim surroundings to worlds they never imagined.” For once I actually agree with a write up. Dai Sijie captures the transportation beautifully. I truly wish I could write half that well!

Most of the time I’m not the type to buy a book from the hit list, but the cover got me curious, and the opening paragraph grabbed my attention. I was also in the mood for a new author. The rest of the book lived up to the curiosity I had. I am charmed.

Life in China during the Cultural Revolution must have been awful, especially for those who were educated and desired to learn more. The story gives us a look from the author’s perspective of China post 1968. At the end of that year, Chairman Mao Zedong decided to close the universities and send the boys and girls who had graduated to the country to be “reeducated” by the peasants. Life took an abrupt turn for those people.

The story is told through the eyes of a boy and his friend, Luo. For the life of me I don’t think that main character has a name! Luo and the boy endure working in a mine, Luo’s girlfriend getting pregnant, and others on the mountain infested with insects, and yet the story is filled with charm and life!

The boys find Four Eyes, a boy in the village who has managed to get away with some rare books by Western authors. The stories, originally written in French and other languages, have been translated to Chinese and are enough to light up the dreadful lives of the two boys who read the stories in the secret suitcase holding the illegal books. They then tell the stories to others as a way to entertain, enlighten and win favor for extras in the mountain purgatory to which they are all confined.

When we crawl into the descriptions, some will tantalize, while many other passages tell us about an existence I am grateful I never had to experience. My heart goes out to anyone who experienced any of these cultural travesties personally. What a life that must have been!

On the other hand, as I said, there are passages in the book that leave you breathless. I also found the well-placed humor a true delight! Take, for instance, the section where the two boys manage to sneak in to Four Eyes home to try to steal his books. They become trapped and are forced to wait hovering over the house’s unemptied chamber pot. They lay trapped for ages and the conversations of Four Eyes and his mother are priceless! I held my breath along with the characters.

The book is available from Calgary Public Library as well as your local bookstores. I give it my best recommendation. Snuggle up after a long day of studying and enjoy.