Author’s note: This is the first of three articles that will detail three very special and very different graduation experiences. I have the privilege this year of participating in three graduations – my youngest daughter has graduated from high school, my second eldest daughter has graduated from university, and I will be graduating myself on June 14! Each of us will be celebrating a very unique kind of achievement, and each of us face very different futures.

As I watched my youngest daughter walk across the stage to receive her grade twelve diploma last Thursday, her dad leaned over and asked me if this brought back any memories for me of my own graduation. It didn’t. Even though I had attended the same high school that she was now graduating from, when I graduated from grade twelve it was no big deal to me. Not only was I a shy loner in high school, with few friends; my family did not place high value on education, so I didn’t even bother attending my ceremonies. Her dad commented that he had missed his graduation too, but for a different reason. As a newly-arrived immigrant and refugee from a war-torn country, high school was difficult for him and he had not managed to graduate at all, only achieving a high school diploma many years later.

My daughter, however, had taken things to the opposite extreme. She had been preparing for this day for months. For her, absolute graduation essentials included a limousine, an expensive evening gown (likely never to be worn again), getting her hair, nails and make-up professionally done, an elaborate banquet dinner, and several days of after-grad parties. I did not agree with all this excess, but with the help of her dad and her income tax return, she managed to realize the graduation of her dreams. What bothered me the most was how little importance seemed to be placed on the actual commencement ceremonies themselves – walking across the stage in cap and gown to receive a diploma seemed of far less interest to my daughter and her friends than the celebration that followed. 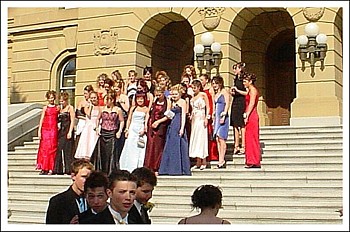 I tried to puzzle it out as I sat across from her at the graduation banquet. She looked exquisite in her finery, far more mature than sixteen. We had been through quite a panic the day previously as she prepared for commencement and graduation. The day had begun with a tight schedule of hair and makeup appointments, and in the frantic pace of getting ready that morning, she had broken one of her nails – a fancy acrylic jewel-inset number done the day previously. The miniature jewel had fallen out, and suddenly overwhelmed, she sat on the kitchen floor and sobbed. At that moment I felt very sorry for being so impatient and unsupportive about the whole thing and I hugged her and reassured her that I would help her that day and that we could get it fixed. Although I had student union activities planned for that whole day, I decided that it was time my family came first, and I dropped everything else to spend the day helping her get ready for her graduation. Even if I didn’t understand why things had to be so elaborate – if it meant that much to her – then I owed it to her to be there and support her.

I made a quick call to the nail salon to confirm that the nail could be repaired, quickly got dressed, and rushed my now somewhat-consoled daughter to her hair appointment. It was now almost noon, and commencement started at 6:30 P.M., and she still had to find a matching shawl and jewellery. Although she had begged me to go shopping with her for these items the previous week, I had been so busy with preparations for the AUSU Annual General Meeting that I had not been available to spend any time with her. So I promised her that I would remedy this and go and shop for her while she was getting her hair done. For the next few hours, one of her sisters and I rushed through the mall trying to match shawl to purse, examining every piece of gold jewellery in shop after shop. Shortly before we were due to pick her up, we managed to find a perfect necklace and earrings set, but no shawl. It was already almost 3 PM when I picked her up from her hair appointment and headed across the city to the nail salon. I had a meeting scheduled for 5 PM and was starting to be very conscious of the clock.

Fortunately the repair job only took a few minutes and the nail was as good as new. A fabric store was nearby, so we decided to see if we could find something appropriate so I could make her a shawl. It took a while, but we finally found a piece of fabric that matched perfectly, and we arrived home with only minutes to spare before my meeting. I had to attend part of my meeting on the phone in transit to her commencement, but at least she had everything in place for graduation. 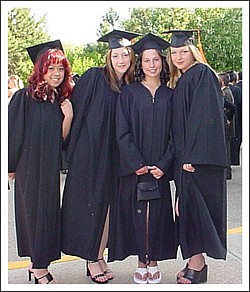 It all seemed worthwhile that evening as I proudly watched her cross the stage in her cap and gown. Although a very strange rule of “no pictures” was in place, this didn’t stop me, or most of the other proud parents, from bringing our cameras. We applauded for hours as over 400 graduates crossed the stage to accept their diplomas. Several weeks previously, at my other daughter’s convocation, they had attempted to enforce the “no applause until the end” rule – something I can never figure out, since it goes so completely against human nature to try and prevent the audience from acknowledging the success of each individual. Something that really surprised me during these ceremonies was several groups of people who brought along bullhorns (the football/hockey game type), which they blasted loudly to cheer some of the graduates. I don’t know if it was an ethnic custom (they all seemed to be part of a certain ethnic group), but it bordered on rudeness, particularly when the excessive noise obscured the announcement of the name of the next graduate.

The few speeches were rather indifferent; a favourite science teacher (a ‘hottie’ according to all the girls!) gave a humourous talk; but I was surprised that no one gave any inspirational “you are the future” type discourse. Aside from the grad song, “Dreams Will Make Us,” an original piece of music written and performed by two of the graduates – there was little talk of what lay ahead. Although I had begged my daughter to keep her cap and gown on so I could get some pictures afterwards, by the time I found her in the crowd she had already divested herself of the gown and returned it. Again I was struck by how unimportant this part of the ceremony seemed to be for her. 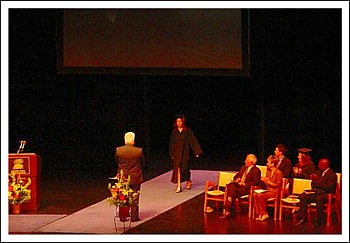 However, seeing how beautiful and grown-up she looked at the banquet the following night, I was glad that I had done my part to make this day special for her, in the way she wanted it to be. As I watched her equally beautiful and elegant friends playing dress-up in their tuxedos, long gowns and corsages, it finally dawned on me just why all this elaborate ritual was necessary to them, and a wave of sadness washed over me.

When I graduated from grade twelve, the diploma was most important, because at that time a high school diploma really meant something. Nowadays this is no longer true, and young people know that the achievement of a grade twelve diploma is simply the first small step. At my graduation, our world was much smaller, our future more secure. We knew we were moving into another phase of our lives, one where we would likely never see our high school friends again, but we still lived in a world where we were confident that we would remain grounded and safe. Most of us were still in the process of making our transition into adulthood, and we knew we had plenty of time to take it slow.

Now, graduating from high school has become an important rite of passage into adulthood, a movement from idealistic security within the cocoon of school, friends and family, into a new, independent, and somewhat uncertain future in a fast-paced world where time waits for no one. For the Class of 2003, graduation is the last time they will be able to create a dream world of limousines and fancy dress. Their days of relative innocence are gone, and they do not have the luxury of taking it slow and enjoying the transition into adulthood. They will be taking responsibility, not just for themselves and their families, but for a “global village” that extends far beyond Alberta or even Canada. They are facing a new and very different environment, one where optimism and cynicism are inextricably linked, where hope and fear are firmly wedded together. A very heavy weight of responsibility awaits them, with no guarantees of success and no positive predictions. So they make their graduation the most perfect party it can be, a final, wonderful, dream-filled illusion – knowing their lives will never again be the same once they get out of their limousines and enter the real world.

Every grade twelve graduating class has its own grad song, one that seems to sum up the feeling of that generation, and their thoughts of what lies ahead. It is no different for my daughter’s graduating class, and I think young songwriters Candice Andres and Kelsey Wrightson managed to effectively capture the uncertainty of the very new and different world that lies ahead for the Grade Twelve Class of 2003, a world where youthful dreams will shortly give way to harsh reality:

“All these years, so many memories
So fond, but yet they scare me…
Don’t be afraid
We walk the road less travelled, on our way
We too may fall
But dreams will make us
Soar above our fears
And conquer things we never thought we could
…dreams will make us strong”