Articles
The Voice
Nature Notes – From the Backyard to the Biosphere. New Life in the Nest 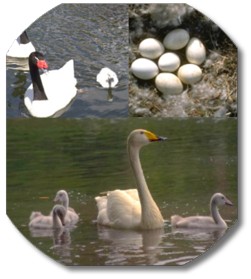 There’s nothing quite like the sound and sight of birds to convince one that summer really is finally on its way. The sign of the first northward migration, the little busy bodies in the yard, picking at the newly emerged delicacies from the turned soil, the colours in the sky, like flying flowers overhead. Birds are our little springtime treasures. But for many of us, they are little more than a lovely and lively decoration come to bless us with their charms.

Even for those of us with an interest in the natural world, knowledge of the haunts and habits of the bird world goes in many cases little further than a collection of memorized names. With so much to learn about these lovely little creatures, what can a short article such as this really cover? Well, in all honesty – not much. But today, given the sun, the breeze, and the lovely calls emanating from the outdoors, I have chosen to write briefly on the truest of spring’s trademarks: babies.

While we may not often consider the issue of avian romance, baby birds are only the final stage in the all-important process of courting, finding a suitable mate and setting up house. Birds are special in the animal kingdom in the way in which they partner with one another for child-rearing purposes. One characteristic of the avian world particularly charming to humans is the relationship formed between male and female birds. While devotion to a single mate is rare in the animal kingdom, birds score high on the monogamy index: 90% of avian species will choose and stay with their one spring love while raising the season’s family. With a female ill-equipped to feed young on her own, and a complex territorial system in which the male must stake out, defend and attract a mate to his chosen turf, the two-parent family works best for the majority of birds.

Once the couple has established itself, the next stage may begin. In many species, this phase of parenthood is all about nest-building. Birds vary greatly in the extent of resources they will put into nest creation, with some building elaborate structures, and others simply laying their eggs directly on the ground. Once a safe and cozy home has been found or built, however, the egg-laying and incubation process is fairly similar for many species. In general, the incubation period is quite short. Birds are hot creatures: with an extraordinarily high metabolic rate, they are able to produce enough heat to keep the eggs toasty warm for the entire incubation period, from laying to hatching. When the all-exciting time finally comes, and little pecking sounds are heard from inside the shell, the avian parent can expect the emergence of one of two types of young: precocial or altricial baby birds.

The primary difference between these two types of birds is the stage of the chicks’ development at hatching time. Precocial chicks emerge from the shell covered with down, and are able to run, swim and feed themselves almost immediately. Such precocious little creatures are busy from the start – darting this way and that – and are generally the most familiar to humans. The most common of the precocial birds we see are the fuzzy ducklings and goslings – those creatures that seem to truly embody the concept of cuteness. Most waterbirds have precocial young, as do some terrestrial-based species. While little direct parental care is needed for these well-developed young creatures, the parent’s role in a young precocial bird’s life is that of a guidance-counselor, in which appropriate food sources and habitat, as well as dangers, are pointed out.

Altricial young, on the other hand, hatch as funny-looking, eyes-sealed, naked and squawking little creatures entirely dependent on their parents for a constant supply of food. While these young birds grow rapidly, eating more than their body weight in food each day, the parenting process is intense and very demanding, requiring almost constant food collection and feeding. The hungry young of most species are ready to chow down on a full meal approximately every twenty minutes. The fledgling stage – when the young emerge from the nest for the first time to test their life skills in the real world – must seem like a dream come true for the work-worn mom and dad. Of course, lacking the ability to fly for at least the initial fledging period, the young birds are at this stage very vulnerable to predation and other dangers. But the fledgling stage is a necessary part of the development process for young birds, and all altricial species go through such a period.

So, in wrapping up the tale of young birds, let us talk a little Darwin. From an evolutionary perspective, altricial species can be considered to have evolved so that the young hatch at an earlier developmental stage than the young of precocial species. As seems logical, given the amount of work required in raising altricial young, birds of these species typically have fewer young than those raising precocial babies. Just picture the long line of ducklings following its parents across the park or through the water. These species follow the pattern of having lots of young, many of which likely don’t make it past the initial stages of life. The sparrow or robin, on the other hand, produces only a couple of young at each nesting, but with such an investment of parental resources, a good percentage of those that hatch are likely to make it. And thank goodness – imagine life with a whole whack of altricial mouths to feed:

Nature Notes – From the Backyard to the Biosphere. Birds en Route