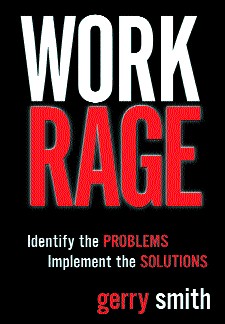 On Tuesday, Oct. 15, 2002, 55-year-old Richard Anderson, a BC Ministry of Water, Land and Air Protection manager in Kamloops BC, walked into the office building where he worked. He entered through the back door with a gun, shot and killed his boss, shot and killed a union representative, and finally, shot and killed himself. On Tuesday, May 20, 2003 52-year-old Bryan Bruce Heron walked into Mission Memorial Hospital in Mission, BC, entered room 223, and shot and killed his wife and her mother. His body was found several days later by RCMP, after having taken his own life. A nurse with 33 years experience at the hospital stated: “We have more violence in our workplace than police and firefighters combined.”

In fact, instances of “work rage” are rampant and on the rise in Canadian society. At my own workplace, in the early morning hours of May 20, 2003, an enraged employee threatened to retrieve his hunting rifle from his home and shoot the co-worker that he was quarrelling with, in addition to a specified group of other co-workers. The RCMP is involved in the incident and luckily no violence has come of it”?yet. BC Rail has been undergoing massive reorganization and downsizing for several years and it is the target of impending privatization with projected job loss at up to 456 management jobs and 767 union jobs”?a total of 1,223 jobs, or nearly 70 per cent of its current workforce of 1,600. Stresses and uncertainties such as these breed work rage and BC Rail is but one of thousands undergoing radical change as our society makes its uneasy transition from industrial capitalism to post-industrialism.

Thinking about these recent events caused me to recall an excellent book that I first read in May 2000. The work is entitled Work Rage: Identify the Problems; Implement the Solutions. The author is Scottish-born Gerry Smith, who now resides in Toronto, Canada and who has been involved in trauma support for decades, first as a Catholic Priest in Glasgow and then as an employee assistance specialist in Toronto. At the time of the book’s publication, the author was manager of the National Trauma Response Service for Warren Shepell, the largest employee assistance provider in Canada (http://www.warrenshepell.com). Facing the prospect of work rage first-hand as a labour advocate, I decided to re-read Smith’s work to refresh my memory on the issues.

According to Gerry Smith, “Work rage cannot and should not be tolerated in any way, shape, or form.” While workplace homicide is not as great a problem in Canada as in the US (there are at least three workplace homicides in the United States every day of the year, according to the author), various forms of work rage are rampant throughout Canadian society. In order to discuss work rage, the phenomenon must be defined. Smith defines it as

:any physical assault, behaviour considered to be threatening or abuse in a verbal manner that occurs in the work setting. It has to include, but is not limited to, the following examples: beatings, stabbings, suicides and near suicides, rapes and shootings. Rage also includes inducing psychological trauma through such means as obscene phone calls, threats and a presence of another person that can be considered intimidating. As well as this, the definition of rage should include any type of harassment, such as being sworn at, shouted at, or stalked.

:work rage is any action, directed at a person or a situation, that demonstrates loss of physical, verbal, or emotional control.

Smith maintains that “… everyone has the right to respect … the right to be free from discrimination and harassment … the right to be free from fear and intimidation.” But how can society keep workplaces free of work rage? It is up to everyone involved”?managers, union representatives, and employees”?to proactively address work rage and “one of the first prerequisites in creating a safe environment is to observe the “?normal’ behaviour employees display in the work environment. Then, by observing changing behaviour, managers and supervisors [and co-workers] will be able to spot the subtle conflicts that begin to occur, and the quiet aggression that might build to a boiling point.”

While recognizing that there are variations, Smith details statistical probabilities that one should be aware of in order to spot potential work rage in an employee before it erupts. He notes that: “:men in their mid-thirties to mid-forties initiate most violence…”; “the most common violent offender in the workplace: the white, Anglo-Saxon … male”; ” … people with an aggressive disposition are quick to blame others for things that go wrong for them … [and] will often have a view of the world that might best be described as black-and-white, right-and-wrong or good-and-bad”; “… what precipitates an episode of rage is a difficult or stressful situation, either in their personal life or in their work”; “[Offenders]… often currently have”?or have had in the past”?a problem with alcohol, drug or other substance abuse … will more than likely be having difficulty controlling addictive behaviours.” Watch for the “paranoid person”; “the isolated person, the withdrawn person, the one who does not mix well or who is almost antisocial.” He “will already be known to colleagues and friends as someone who can’t control his temper and who seems to thrive on confrontation. Arguments develop easily:” with this person, who is “:known for his confrontational attitude toward peers and perceived authority: has either a collection of guns or an unusual interest in different types of weapons : [is] described as unstable, different, bizarre, or even plain weird”. While it is most likely that a person prone to display work rage will exhibit one or more of the foregoing attributes, “profiling” is certainly not an exact science.

In addition to his examination of personal attributes displaying the propensity for work rage in individuals, Smith covers systematic organizational attributes that will more or less likely lead to incidences of rage in the workplace. He states that:

… Much of the “corporate culture” takes its lead from the top. For example, if the person at the top is perceived to be a controlling person, you’ll probably find many of the middle managers will emulate the controlling style. When the leader is a mentor and a guide, many of the “followers” will also be guides.

… When the person at the helm of an organization is known to be a “control freak”, there is perceived to be tacit permission that “controlling” is an acceptable form of behaviour within the company.

… one of the biggest contributors to the problem of rage in the workplace is the growing lack of respect for people as people that is endemic in Canada. Any organization, therefore, that wants to stand out as a “good company to work for” has to be extremely vigilant in how it selects, trains and promotes into management. Management sets the tone for the entire organization.

… Turning a blind eye to aggression and ignoring the aggressor is like giving tacit permission for all staff to behave similarly.

Smith also recognizes that effectors external to the work organization play a role in work rage: “When there are high levels of poverty, high unemployment, greater demands on food banks and a large number of welfare recipients, the aggression levels in society rise.” Other causal factors include: familial conditions; robberies; irate and/or inebriated customers; and interpersonal relations with “difficult” people. The author also studies the interrelations of work rage with: trauma, legal liabilities of employers, workplace respect, risk assessment, employee assistance programs, and future challenges. He writes in an easy-to-read and comprehendible style, and he makes Work Rage interesting with a plethora of real-life examples from both news-worthy events and his own personal experiences in trauma response.

This book is a must-read for anyone and everyone involved in the social relations of production in the twenty-first century. With the organization of work undergoing radical changes that are vastly increasing the insecurity and instability of work for those in the huge and growing peripheral sector, while simultaneously intensifying the speed and hours of work required of those left in the core sector, it follows that stress levels of workers are explosively high. It is no surprise then that “:statistics indicate that although the national homicide rate is stable, there is an increasing problem with workplace violence. In fact, throughout North America, workplace violence is the fastest-growing category of crime.”