Author’s note: This is the second of three articles that will detail three very special and very different graduation experiences. I have the privilege this year of participating in three graduations – my youngest daughter has graduated from high school, my second eldest daughter has graduated from university, and I will be graduating myself on June 14! Each of us will be celebrating a very unique kind of achievement, and each of us face very different futures. 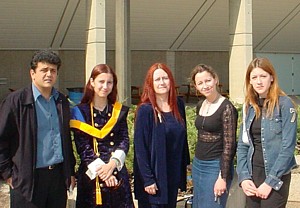 Last week’s article detailed the experience of my youngest daughter’s graduation from high school – an event accompanied by an elaborate ritual of dress, hair, makeup, limousine and parties. My second eldest daughter, Marni, also graduated a few weeks before from university, and her ceremony and attitude towards the whole process was very different.

Unlike my youngest daughter and her friends, who seemed to place little importance on the commencement ceremony, and more on the party afterwards, Marni was not interested in even attending her reception. For her it was all about the accomplishment of graduating from university, and for her, the moment she crossed the stage to receive her diploma was the highlight. She graduated with a BSc (major in Chemistry, minor in Music) from Concordia University College, her hard work earning her a degree “with distinction,” along with a science award which she had received several weeks before at the Concordia awards ceremonies.

Concordia is a smaller university college based in Lutheran theology. It initially was affiliated with the University of Alberta, then became an independent institution. This year marked their 16th Annual graduation convocation ceremonies. Although not of the Lutheran religious persuasion, my daughter chose it because it had been highly recommended to her by a former music student of hers. It turned out to be a very good choice, as the small classroom sizes gave her an opportunity to build a close rapport with her professors, and her summers were spent working in the Concordia science lab. During her last two years, she had a wonderful chance to get involved in an original chemistry research project, one which earned her a prestigious award at the 2003 Western Canada Undergraduate Chemistry Conference. 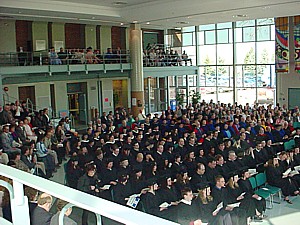 Because she and I were both full time university students for the last few years, this gave a very unique slant to our relationship. Both of us have been incredibly busy and have had little time to spend together. But we both understand very well what each of us is going through. We’ve also been able to collaborate on some projects, such as a music therapy presentation she did, and a communications studies course she helped me with. Our collaboration has been somewhat limited, since we are studying very different topics, but we proofread each others’ essays and assignments and commiserate when exam time comes around. It’s been a wonderful opportunity for me to learn more about science too, and I regret not pursuing a BSc myself instead of a BA. She also provided me an on-campus link to student life that helped me better understand the uniqueness of the AU student experience.

Her graduation day began with a private breakfast at the home of the President of Concordia, attended by a select group of the top graduates. From there the grads all headed over to the University building for the morning ceremony. Although the grads all entered ceremoniously, this was more of a religious service, accompanied by Concordia’s excellent choir, and led by the resident pastor. His talk was the kind of forward-looking discourse I expected (and did not hear) at my youngest daughter’s graduation. He encouraged the grads to build on their accomplishments as they went out into the world, always keeping respect for others and a sense of spirituality at the forefront. I found it quite inspiring. 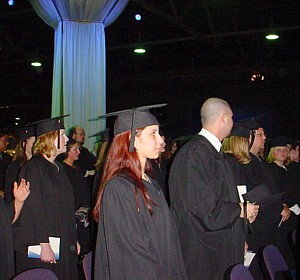 After that ceremony, Marni and I headed off to collect the rest of the members of the family for the afternoon commencement. This was being held at Edmonton’s Agricom, a dark, barn-like building where trade shows are generally held. By the time we arrived, the huge room was almost completely full, and we were forced to sit at the very back. Graduands entered the building to the sound of a marching band, followed by the national anthem. The convocation address was given by a Mr. Frank Kobie, former chair of Concordia’s Board of Regents, and was entitled “Is it the Truth?” It was an interesting talk, but I must say it was the most negative and discouraging discourse I have ever heard at a graduation ceremony. He first recited lists and examples of people who were dishonest and who took advantage of others in a big way (ie Enron and other such corporate scandals) then elaborated on all the awful things going on in the world. I kept waiting for him to add at some point, “the world is a really messed up place but you graduates can go out and change things” but he never did. In retrospect it was very much a religious-inspirational type discourse, more of a sermon than a graduation speech. It was probably appropriate for a university college operated by a religious group, but I found it almost depressing! 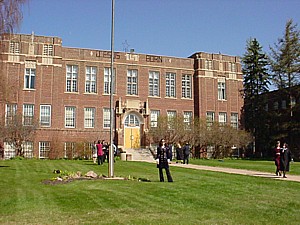 There were over 300 graduates, and I was surprised to see the after-degree diploma recipients also included (although they only numbered a few dozen). Each was announced, kneeled to receive their hood, then walked across the stage to shake the hand of the university president. Those with distinction or high distinction also received a gold cord. At the beginning of the presentation, the audience was asked to hold their applause until the end. This, of course, is one of my pet peeves, since I think the audience should be allowed to acknowledge each person as they are introduced. When no applause is allowed, family members and friends compensate by cheering and yelling instead. Of course some grads are more popular than others, or have more friends and family present, and receive more cheers. Another daughter, Amaya (who readers will know from previous articles) and I were standing up at the front of the stage to take pictures. She started to feel really bad for those who were announced without anyone cheering for them and decided to become the personal cheerleader for them! She would wait a split second to see if anyone else was going to cheer, and if not, she’d yell “go Jill!” or “yeah Mark!” or “whoohoo Bradley!”

I was a bit embarrassed by her antics until a lady came up and said, “can you please cheer for my daughter when she is announced? I want to do it but she’ll be really mad at me!”

At the conclusion of the ceremonies, the graduates were led out to the tune of “The Sting”. I thought the choice of music was rather odd, but it did seem to fit with the theme of the convocation address! The audience spilled out into the concourse of the Agricom and although we tried to gather together in the crowd for some group pictures, we were unsuccessful. It was really not the greatest venue, although in Edmonton it’s one of the more popular graduation locations. 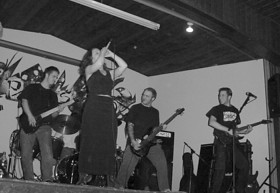 We celebrated Marni’s graduation with a family dinner at a local Italian restaurant, followed by a fundraiser concert at which Amaya’s heavy metal band made their debut. It was such a different feeling and atmosphere from the high school graduation we were to attend a few weeks later. Partially I suppose its maturity – graduation at 16 means something very different than graduation at 24. But I think its also the achievement itself. When you have worked very hard at university level for four years beyond high school, you have a better sense of your priorities and where you are at in life. Its still something worthy of celebration, but you do not have the feeling that you are leaving a huge segment of your life behind to face an uncertain future. Instead you have the sense and confidence that you are now prepared to grab hold of life, take what you have learned, and make a mark on the world. Your attitude towards graduation is dignified and appropriate to the occasion.

Unlike my youngest daughter, who is planning to find a summer job so she can go shopping as soon as possible – Marni is taking some time to rest and recuperate. She is weighing her options, and is planning on working for a while before returning to university to pursue a masters degree and possibly going into med school at some point. I asked her how she felt at achieving this degree. She said, “Mom, I picked the hardest subject I could find – chemistry – because I needed the challenge, and I just wanted to prove to myself and everyone else that I could do it. I’ve succeeded, and now I want to try out some other things, and spend some time enjoying activities I’ve put on hold, like music and dance.”

Her comments made me think about how wonderful it is to graduate and have a lifetime ahead where you can still experiment with options and try new and different things.

So now I head into my own very special day – my own graduation. The culmination of seven years of hard work and sacrifice. How will it feel to cross that stage? Will I be able to maintain some decorum, or will I lose it and break into tears of joy as I receive my degree? Will I party like a 16-year old? Stay tuned… 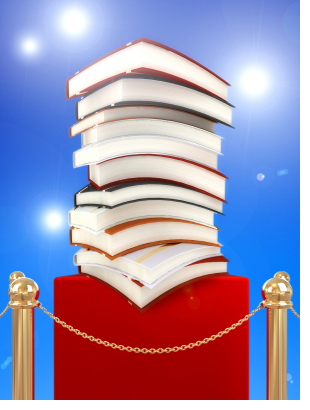