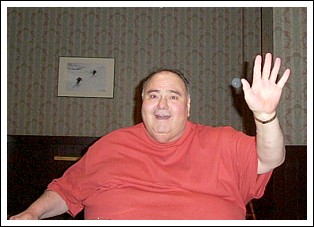 When I asked AUSU Council member Nicholas Palamarchuk in a recent interview why he decided to undergo an extensive gastric bypass surgery seven weeks ago, he replied simply: “I was tired of being fat.”

To be more specific, he was tired of the limitations placed on him by his weight, which had topped out at 438 pounds. Nicholas had obtained most of his first degree – a Bachelor of Education – through Edmonton’s U of A, but when his weight became a barrier to remaining an on-campus student [he had to walk a couple of miles a day to get from class to class], U of A recommended that he take his final courses through AU. He took their advice and became an AU student to finish his first degree in 2000. If it were not for distance ed, however, completing the degree would have been much more difficult.

Nicholas’s weight also became a barrier to accessing emergency health care. Nick is allergic to bee and wasp stings, and because he lives in a rural area, he has to carry an injector to administer drugs to himself in the case of a sting, and then he must call for emergency treatment. On one occasion, as he was rushed to the hospital in an ambulance, his condition became so dire that EMTs thought they might have to perform an emergency tracheotomy to open his throat and let air into his lungs. He arrived at the hospital in time, but was later told that if the emergency procedure had been required, they might not have been able to open his throat in time due to the amount of weight on his neck. Another time, Nick had to wait for the fire department to assist in putting him in the ambulance. He feared that one day, this type of delay could cost him his life.

On top of this, he started to experience high blood pressure and other weight-related medical problems. His knees are both quite arthritic due to an injury in early life, and one knee is now “just bone scraping on bone.” Doctors have been unwilling to operate on his knees until he loses weight. Nicholas knew that something drastic had to happen.

Not only did he choose to make some dramatic lifestyle changes and undergo a serious surgery to alter his weight – Nicholas has also been quite willing to talk about his weight problem, and the restrictions it has imposed on his life. His story is not an uncommon one, but we seldom hear from others in his situation. So many suffer in silence because they are ashamed of their weight. Morbid Obesity is on the rise, and often sufferers comprise an almost invisible minority. Every obese person has a story of something that they could not do, or a place that they could not go, because of their size. It can be a barrier even to obtaining an education, not only because of the extensive walking required to attend classes on most university campuses, but because very big people might fear walking into a classroom filled with desks that they cannot get into, or the potential hazards of sitting on flimsy chairs.

For Nicholas, the choice to undergo surgery became very simple as his health problems increased. The path to the operating room was not an easy one to tread, however. Before Nicholas could even have his surgery, he had to spend extensive time under the care of a personal nutritionist and doctor, in a sort of training regimen for how he would eat post-surgery. He had to show, for example, that he could discipline himself to eat meals as small as a half cup of food at a time.

Eating tiny meals is a necessity after weight reduction surgery. Nicholas had what is traditionally known as a stomach stapling, but in his case doctors placed a vertical bound around his stomach instead, to reduce the volume of his stomach from the normal 300 ml to only 5 ml. Additionally, they performed a Y bypass on his colon, reducing the length from 28 feet, to 2.5 feet. This means that food passes through his system very quickly, and absorption is lessened. Essentially, food now passes straight down through his stomach, and then quickly through his intestine. All food is processed within 2 hours. His doctor performed a bypass rather than removing the unused colon so that if Nicholas later loses too much weight, the bypass can be reversed. The use of a band rather than staples may also reduce complications that can arise if staples rip out of the stomach. The band has some give – this makes it safer, but it also means that it can stretch over time if the large meals are eaten.

Closing up Nicholas’s stomach incision after the surgery was quite difficult, due to the size of his stomach, and he says that he not only had stitches, but his incision was crossed train-track style with large steel staples from top to bottom.

Such a drastic alteration to the digestive tract means that he must learn to eat very differently. To begin with, he ate only soft, bland foods like Cream of Wheat. Slowly he is introducing new foods, one at a time, as his stomach heals. He says that he makes sure he’s near a sink when trying something new, because he’s never sure what he will be able to keep down. Certain foods that he used to love – like steak – will never again be on his menu. His new, abbreviated digestive system could not handle it. His food must be easily digestible, and in small portions. At first he was only able to eat 1/4 cup of food at a meal, but now he’s up to 1/2 cup. In time he will increase to a full cup at each meal, but no more.

This sounds like a very small amount, but when you take into account that a normal human stomach is only the size of your fist, and that medical associations like the Canadian Heart and Stroke Foundation say that most people eat far more at a sitting than they should, then these portions seems a little less drastic. Nicholas must now eat 3 meals per day, plus 3 snacks. Eating small meals frequently not only keeps him from overloading his belly, but will also work to increase his metabolism – a weight loss secret that works for many people without surgery.

He now must avoid foods that expand in the stomach, like popcorn, dried fruit, and sodas [unless they are allowed to go flat first]. Sugar makes him feel nauseated, and he can’t drink milk, although cultured dairy products like yogurt and cheese are fine. His diet now contains a much higher proportion of vegetables, and Nicholas says he uses the Canada Food Guide as his template. He’s eating peanut butter and digestive crackers, and will soon introduce some raw veggies into his diet. Because of the limitations of his stomach size, he does not drink anything for a half hour before or after a meal, otherwise the amount he drinks will reduce how much food he can have.

When I talked with Nicholas, I wanted to know how he was doing, and if it was all worth it.

It turns out that in just 7 weeks, he’s lost an incredible 68 pounds! His medication is already down to half, and he’s starting to regain his strength after a lengthy convalescence. Early after his surgery, he drove his car a little sooner than he was supposed to, and there was a little leakage around his stomach and he had to spend more time resting. Stubborn as he is, he soon tried driving again with the same result. Now he’s doing well, though, and can drive without complications. He’s not quite ready to do his full his exercise regimen, but he’s getting a start on this by working out his calf muscles while sitting and doing some gentle half situps. In time he’ll start walking – something he used to do all the time – and doing a muscle building workout.

Nicholas is at an advantage in that he used to work out very regularly – in fact he exercised too much at times. He also used to walk several miles a day, and he’s looking forward to being able to do that again.

His doctors feel that he’ll lose about 200 pounds in the first year, although results are hard to predict since it depends on how his metabolism reacts, and other factors.

When asked if it was worth it, Nicholas says that if he was faced with the same decision today, he would not hesitate. He’s finally losing weight and his outlook is excellent. He’s a full time AU student, now taking his second degree in Health Administration, and he plans to continue on to AU graduate studies. In fact, he’s already taken one AU grad course as a non-program student. He’s also been a member of AUSU council since march of 2002, and this week he’ll be travelling to Athabasca in order to support this year’s graduates.

Nicholas was tired of being tired, of sleeping all the time, and finding it hard to walk and climb stairs. Now he’s excited that he’s finally moving toward removing those limitations from his life, and he appears to be very accepting of the sacrifices that he’s had to make in order to achieve that goal.

Nicholas credits his outlook on faith. He’s a deeply spiritual man, who once planned to become a priest, and who has dreamed of working with children. He has overcome many obstacles in his life beyond his weight problem, and several years ago made some significant changes and became a very different person from who he once was. Nicholas says that these days, he lets most things just roll off his back, where-as in the past he would have allowed his perfectionist tendencies to take over. His story is inspiring, and shows that with determination, anyone can dramatically change their life and become a new person.

The Voice will continue to follow Nicholas’s progress, and will run updated interviews and photos as the months go by. I think I speak for everyone on council when I say that Nicholas is an incredibly warm and inspiring man, and many of us who have worked with him have felt like we’ve gone through parts of the surgery process with him. We knew when it was booked, and we all talked and wondered about him when over the week he was in hospital. Some councillors visited him while he was recovering, and relayed news to council and to me as well. It has felt very much like a family affair. Because he has shared so much of his story with others, perhaps Voice readers will also feel like they know Nicholas, and become inspired by his success.

We’ll keep you posted, and feel free to forward your best wishes to Nicholas via the Voice, or write him directly with your questions at npalamar@ausu.org.