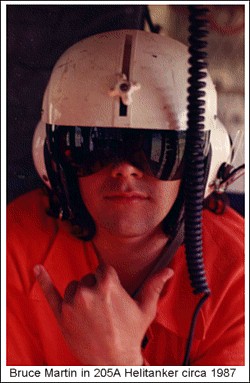 Every day I pass by a friend’s place on my way down-town, but I rarely stop by to see him any more. There was a time when we would hang-around together constantly and I must say I miss those days. But life has a way of taking people down separate paths and so it happened with Bruce and me.

We first met in May of 1984, having both hired on to the BC Ministry of Forests to work in its newly formed Northern Initial Fire Attack Crews (NIFAC) division in central BC. I don’t remember being overly impressed with him at first, but with more than twenty individuals attempting to make first acquaintance, it was difficult to differentiate between personalities. However, I soon came to know him as one of the nicest and happiest people that I have known to this day.

It wasn’t long before I knew he would be one of the few people that I would call a true friend.

During those years we had some crazy and exciting times together. We fought forest fires from Montana to Alaska. In 1987 we trained together as two of twelve BC provincial 205A Helitanker spotters in Salmon Arm. After the summer fire season in 1986, Bruce talked me into riding ten-speed bicycles from Prince George to Vancouver in celebration of Expo86. Having spent almost no time training for such a venture, we set out on the 800+ km journey and arrived four and a half days later. It took weeks for my swollen legs to return to normal and I still carry the stretch-marks on my buttocks as battle-scars of our trip. 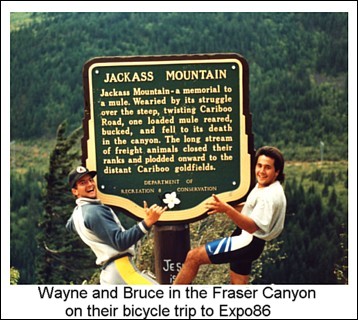 Bruce played a lot of guitar back in those years. He encouraged others to bring their instrument to the NIFAC base and formed a small band. They sounded really good together and he had aspirations of becoming a rock star like so many musicians in their early twenties do. He showed me my first chords on his guitar and prodded me to buy my own. I soon did and it is leaning in the corner of my office right now; but I don’t seem to have the time to play it as much as I once did. Bruce doesn’t play his any more either. 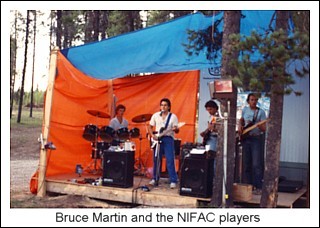 At that age, we were always up for an adventure and we did our fair share of drinking and partying. Everyone was partying heavy back then, but we would often leave the crowd behind and take our bottles to the wilderness. We would go hiking in Mt. Robson Park and take along a case of beer. Once we even went gold-panning up the Goat River, packing all of our gear on our backs including bottles of Yukon Jack and Southern Comfort. I don’t know what was more painful, the hiking or the hangover the next day.

I remember our musing one day”?the two of us in our early twenties and feeling typically invincible”?about our being old men together sitting on a porch somewhere and reminiscing about our respective long lives. How many grandchildren would we have had, what occupations would we have worked in, how successful would we have been, etc. 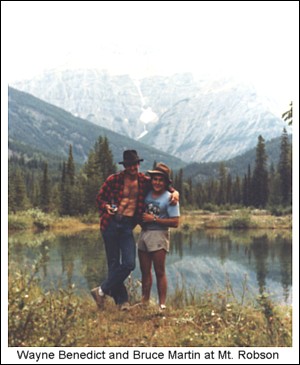 How could we have known at that time that our lives would not run the parallel course that we expected them to?

Today, instead of driving past his place as I usually do, I decided to stop in and see my old friend. I didn’t visit long but the connection we have is as strong as it was in 1988, which was the last time I saw him alive.

You see, Bruce’s place is in a grave-yard now. He was killed in a single-vehicle accident while driving home intoxicated on April 14, 1988. I guess we weren’t as bullet-proof as we thought we were.

Even today, fifteen years after his death, I am crying as I write these words. My tears fall for a life cut short at twenty-three years, for the experiences he has missed, for his family, and for my own immeasurable loss of his friendship.

Needless to say, I don’t drink and drive today, as most of us did back then. I hope that those of you that read this article will also think twice before driving after drinking”?just don’t do it. Your early departure would leave a bottomless pit in the hearts of your friends and family; take it from me. 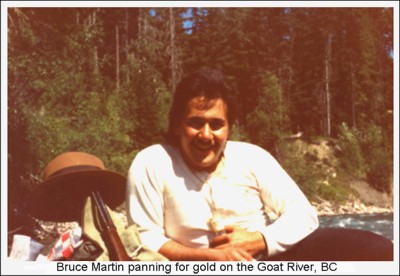 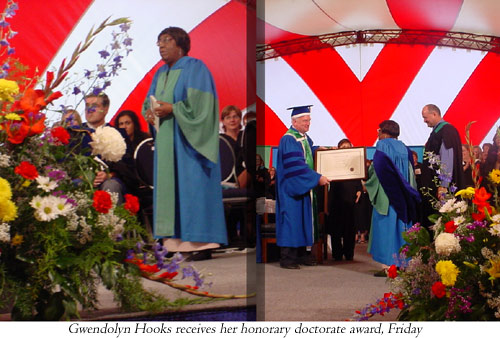