Be sure to read The Voice next week for complete convocation coverage, and many more photos. This week, part 1 :

What’s it like to graduate? As a member of the Athabasca University Students’ Union (AUSU) I was invited to attend this year’s convocation, Saturday, June 14th and I had the chance to finally put some faces to names and catch a glimpse, before it’s my turn, of what it’s like to graduate from AU. Attending convocation as an observer is an emotional experience. You can’t help but well up a little as you watch people revel in their day of glory and watch some of them bite their lips and hold back tears as their name is called and their degree is placed in hand. Here’s my take on the day.

Actually convocation started the night before. Friday evening the AU Alumni Association invited all “alumni” (those who graduated from graduate programs that day and those who would receive undergrad degrees the following day) to attend a meet-and-greet function in the Athabasca Best Western Hotel. When I arrived shortly after it started at 7 P.M., the small room was packed with students and their families. With all these students in one place, it was a perfect opportunity to “hound” students into giving me a short profile (these will be running in The Voice for weeks to come). Kerry Joyes, AU alumni organizer, supplied me with free drink tickets to “persuade” students/alumni to share their AU experience. Even though I had to get up the next morning at 6:30, I stayed until shortly before 12, talking with fellow students, and getting to know a lot of amazing people and the families who have supported them through their AU education. 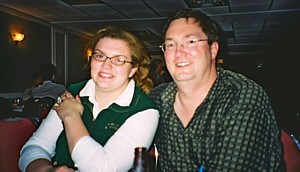 6:30 AM came quick! I had promised fellow councillor Nicholas Palamarchuk that I would be ready to go by 7:20 AM, but I hit the snooze button one time too many and couldn’t bring myself to get out bed until 7:00, so after a quick shower and a call from Nicholas at 7:30 to see where the heck I was, we were on our way to the AUSU sponsored breakfast, which was very well-attended. 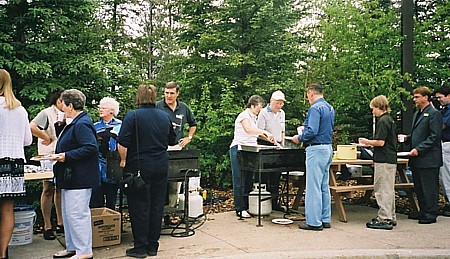 Students were treated to pancakes (flipped and served by AUSU members, with AU President Dominique Abrioux and VP Judith Hughes), sausages (somehow Nicholas, who just had a stomach minimizing operation, [see last week’s issue of the Voice], was put in charge of cooking sausages – a food he once adored. What cruelty!), fruit, coffee and juice.

Against the backdrop of AU’s cement pond that mesmerizes with its triple fountains, Juno award winning Alberta-based family group The McDades impressed everyone with classical melodies and up-beat Celtic tunes.

Once again I looked for the name tags with a blue strip, which indicated a soon-to-be AU graduate.

Everyone I approached in the breakfast tent was more than willing to fill out a questionnaire and pose for a photo – some even wanted to include their spouses or children.

People were amazed at the “grandeur” of the grounds, the massive size of the convocation tent, and many were perplexed at the university’s size, considering that few students actually attend in person.

After breakfast I ventured out onto the massive grounds of AU looking for those wearing the blue, clip-on badge of honor. I sat down at a picnic table set up in front of the pond to have a student fill out a questionnaire sheet. This individual had come with her mother-in-law, who was obviously extremely proud of her daughter-in-law’s achievement.

Another graduate, about 50 years of age, was there with her mother who appeared to be around 80. This elderly lady projected such happiness to be able to see her daughter graduate as no one in their family ever had.

As I listened to this woman go on and on about how proud she was of her daughter, I glanced over and saw that her daughter had a tear in her eye listening to her mother describe, to a total stranger, what a brilliant, motivated and brave daughter she had.

Family pride was evident everywhere, especially for Wanda Laurin’s children Genevieve (13), Monique (11) and Jacqueline (9), whom I encountered in Dietmar Kennepohl’s science laboratory. Dietmar was putting on scientific demonstrations, oohing and aawing the graduates and their families with his Harry Potter, Hogwarts type of experiments.

I asked the three Laurin girls, as they were transfixed by the assortment of bugs and butterflies Dietmar was displaying, what it was like having their mom attend AU. They replied that she never got to play with them, which Wanda assured me was not true – children sometimes remember the time you don’t spend with them more than the time you do.

The girls also said that they were very proud of their mom and that AU is “cool” but their mom was crazy for going back to school, because she already had a job as a teacher.

After speaking to the Laurin family, I spoke quickly with Dietmar about the science lab. From his department, students are sent physics, geology and chemistry kits to work on at home.

Each year 1200 students attend labs during the summer on AU property.

I even met a science graduate, Sandra MacIsaac (profiled in the Voice this week), the night before at the Alumni function. She is from Minnesota, but came up to Athabasca to complete her labs – a week of grueling 8 hour days of intense hands-on experimentation.

I was curious to know where she stayed and Sandra informed me that a student could stay at the local hotel or the university could provide contacts with Athabasca residents who would put up visiting students in their homes.

Sandra also mentioned that her friends and co-workers thought she was crazy to give up her summer vacation to do a week-long boot camp of science, just one of the many things an AU student gives up to achieve their goal.

Next, I headed down to the graduating area. An mini trade-fair of sorts was set up for the students including the selling of graduation rings, the handing out of alumni packages, sales of AU merchandise (hoodies, golf shirts and beanie babies with the AU logo and grad cap were their biggest sellers), degree frames for sale, and hood sales.

Hood sales? Are you thinking what the heck is a hood? Well a hood is what is placed over the graduates’ shoulders by the Registrar just before they receive their degree on stage from AU’s President.

Each department has a different color:

I bet all you male BA students are really regretting your choice of program now!

Well you would buy one as a souvenir or if you plan on going on to teach at a university or college, because every time there is a graduation at where you go on to teach, you get to wear your academic hood.

At around 11:30, after enjoying the AUSU sponsored lunch of assorted salads, meats, cheeses, a big brown chunk of what I was later informed was pate, and an enormous table of decadent desserts prepared by the AU cafeteria staff, students began preparing for the 1 PM ceremony.

Saying goodbye to their family and friends, who then rushed to get a seat with a decent view in the convocation tent, graduates ventured into graduate-only territory – the robing room.

As staff signed graduates in they were warned that once they enter the robing area there is no leaving it and there is no access to a washroom.

Here they are fitted into generic black gowns and AU VP Alan Davis takes time to review each graduate’s name so that there are no mispronunciations when their name is announced on stage.

Students were then grouped into their area of study and marshalled by platform usher James D’Arcy up the long, barren corridor and out the library doors.

Read The Voice next week for part 2 of this convocation photo feature, with photos and information about the graduation ceremony, the presentation to honorary degree recipient Vicki Gabereau, and more. 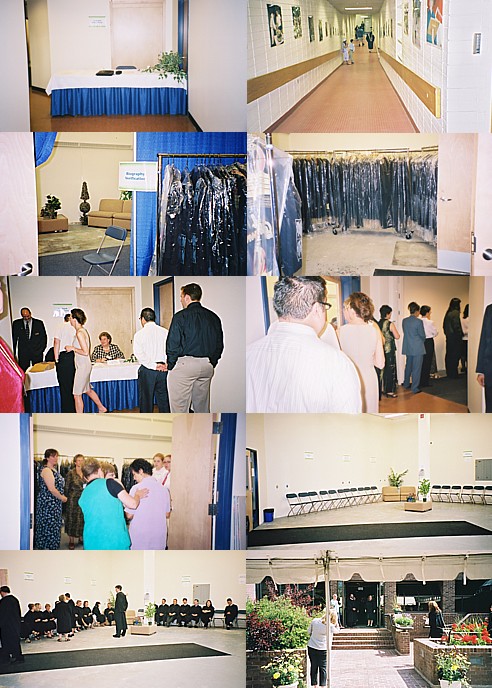