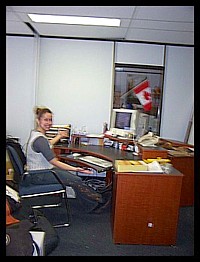 Last fall the AUSU office in Edmonton received some unexpected news. The building where we have our office was for sale, and a buyer had purchased the mortgage, then foreclosed, evicting all the tenants with one month’s notice. This included the Athabasca University Edmonton Learning Centre and our AUSU office. Although the university consulted with their lawyers, they were told that this was legal (regardless of how unethical).

The university immediately took action and managed to receive a delay of several months on the eviction. They then went into high gear, searching out alternative space locations in the vicinity. The timing was especially bad, since AU’s ELC and the Centre for Innovative Management in St. Albert have been negotiating a merger during the next few years, possibly in the downtown Edmonton area. Various locations were looked at, keeping in mind the need to find a reasonably-priced location that could be office-ready in the very short time frame we were working with; and one where a long-term lease would not be required so that the original plans to combine ELC and CIM could still be pursued.

AUSU’s office space is donated to us by AU, and throughout the process they ensured that we would be kept informed of progress and consulted regarding our needs. For a while it looked like we would be moving a block over to the Baker Building, an older and much less desirable space than the current location. Finally, in March of this year, we received some good news. The buyers of the current building had agreed to continue AU’s lease, but the increased cost per square foot would mean considerable downsizing would be required – the loss of almost 1/3 of the existing space. 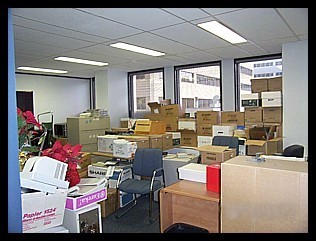 AUSU met with representatives from the office of the VP Academic to outline our minimum needs. In addition to sufficient space for several workstations, we pointed out that we require a visible presence for students, and that we maintain a full time staff person (as opposed to many of the AU offices which are used irregularly by commuting academic or tutorial staff). Finally, in April, we were advised that we would be given an office space on the second floor next to the computer lab. The computer lab would be downsized by about one-half to allow for our office, but this was easily justified given the low use the lab receives from students. The split gave AUSU the portion by the window, but it also means that we have to pass through the computer lab to reach the office.

Initially we had been told the move would occur in the first week of May, and we began the long packing process with that date in mind. We were barely into the second week of April, however, when we were told that the move date had been moved up – and we were to be out the very next week! 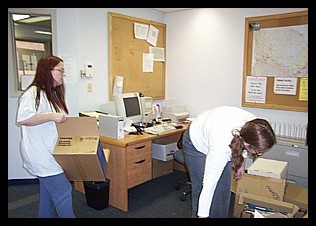 For the rest of that week, we began an intense packing session. The bulk of the work fell on Carla, our administrative assistant, but the AUSU executive also did as much as they could. Towards the last few days we hired temporary packing help to ensure the job would be completed in time. Any of you who have ever moved know what a painful process it can be. There is, however, one advantage – you finally clean out some of those stagnant closets full of stuff that has been sitting there for years, serving no purpose! Our office was no different, and we were shocked (and sometimes amused) at what we found. Returned mail from four and five years ago, income tax application forms almost a decade old, broken coffee-makers and office equipment, stacks of long-expired coupons, boxes of five-year old junk mail – just to mention a few! For a while we tossed more than we packed, yet we still managed to fill dozens of boxes.

When moving day finally came, AU sent the movers and quickly emptied the office. For several hours everything sat in the exam waiting area, since they were still holding an exam in the computer lab and we could not enter our office. Finally the door was opened and everything was brought in – we now had an office that consisted of nothing but a room full of boxes! 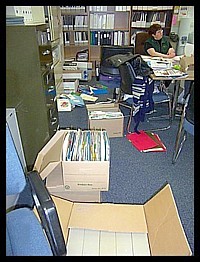 At this point it was late in the day and we decided to leave and tackle the mess in the morning. Carla had done a wonderful job of organizing the packing, so it was not hard to find the urgent essentials. However there was one significant problem that prevented us from unpacking. Several years previously an AUSU executive member had purchased two very large executive desks for the office. They were the type you find in a spacious penthouse office – with a highly-paid executive leaning back on his leather chair, with his feet up on the edge. Not only were they completely unsuitable for a working office like ours, they were so large that two of them seemed to take up almost half the new space! To top that off, we discovered the day before the move that our administrative assistant’s complete work station had been on loan from AU, and they had taken it back!

So before we could proceed we had two urgent tasks. First, get rid of the giant executive desks. This took much longer than expected, but finally we managed to sell them at an extremely reasonable price to a deserving non-profit organization. Second, to purchase new, useful office work desks. This part was relatively easy:until it came to the job of putting together the new office furniture. 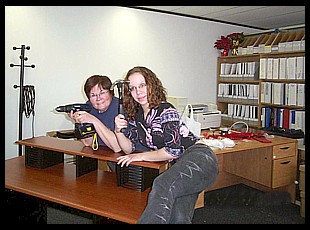 No doubt many of you have done the do-it-yourself furniture assembly route, where you spend hours trying to figure out the funny diagrams and foreign-language instructions. Once you get half the piece built, you discover you forgot a section and have to disassemble the whole mess. Even once you’ve achieved success, there are always several important-looking bolts and screws left over, leaving you wondering what you did wrong and when it is going to fall apart on you! After several days of struggle, the furniture was “ready” – less a few broken parts and missing pieces on re-order!

By this time the 10th Anniversary AGM was almost upon us, and although it was only a few days away we still had no functional photocopier, printer or fax. Important historical papers were buried under boxes, and only one computer was working. We were beginning to despair that we would not be ready on time. In spite of putting in several 18-hour work days to get things organized, we were still rushing to put AGM report booklets together an hour before the meeting. We managed to be ready for the meeting, but the office was still a long way from useable. 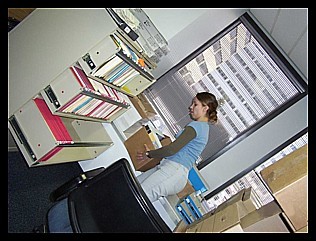 During the last few weeks we’ve managed to get all the office equipment in place and functional, and most of the important unpacking is done. However we will likely still be emptying boxes for some time to come. Given that the new lease is only for two years – we may well still be partially packed when it comes time to move again!