AU’s convocation report, from The Insider

AUSU Moves – AUSU has a new office. Read Debbie Jabbour’s report to find out about the new space, and see pictures of your AUSU representatives getting grubby and working hard!

AU Improves access to Convocation Information, but forgets about AUSU!

In the past I have complained that AU has not used the technology at its disposal to help distance students feel a part of the AU community. In particular, AU could do much more to help graduates who are unable to attend convocation to experience the ceremonies as they happen. What I imagine is AU could do is what many media outlets do: run live feeds via videoconference on their website – a technology that is now quite common, and which AU already has all of the equipment for. In lieu of this, AU could have someone on the website all day, uploading information, pictures, and other “on the scene” updates. Students at home could even send messages to the grads, which grads could read on computers on the grounds. In this way, those at home would feel like they are part of the celebration and that they have some ability to interact. I don’t think we can overestimate the importance of making the some 70% of grads who cannot make the trip to Athabasca feel included.

Personally I wish they would also consider holding a ceremony in Edmonton, so that busy grads don’t have to make that long and arduous trip to boondocks. It’s likely that a large percentage of those who don’t attend convocation, stay home because getting to AU is so time consuming an difficult to arrange. I know whereof I speak! I once arranged a trip to take my husband to AU, and it was a nightmare! The bus only runs twice a day, and it does not stop at the university or hotel. If you arrive in the evening, nothing is open. I called in advance to ask about public transportation and was told that “the cab” has to be booked a day in advance!

Had my husband not been offered a ride from an AU faculty member, he’d have faced a 30 minute walk to the hotel in -50 Celsius weather. People have died from exposure in less time! Oh, and if you get to the hotel after nine, you can’t get food because the kitchen is closed. You can’t get there at a reasonable time in the morning, so you really have to get there the night before.

I imagine that during convocation week AU has extra transportation available and there are charter busses making the trip, plus it’s held in summer, but you get the point. It’s a trip I dread ever having to take, and for some people who can only get the weekend off work, getting across country and up to AU is pretty much impossible. Getting to Edmonton is quite easy. Maybe if AU had June ceremonies in Athabasca and December ceremonies in Edmonton? Just a thought:

But for those who can’t make the trip, there are so many ways that technology could be used to make them feel included. This is not science fiction – it’s a simple and common technology that even small media outlets utilize, and which – I reiterate – AU already has most of the equipment for. Some classes are already being video-conferenced by the MDE department as a matter of course.

So, once again I’m disappointed that AU missed out on an opportunity to bring AU students together across the country – and indeed the world – into a community event we all could share on the very same day.

That said, AU has improved access to convocation information this year – as you will see in this week’s News From AU column, which features convocation coverage. For one thing, this year AU videotaped the convocation ceremonies, and promises that the video coverage will be available soon. Whether they will be selling copies of tapes or making the coverage available online, I can’t say, but it’s a nice opportunity to view the ceremonies and I’m sure many will appreciate it.

Also this year AU has put the text of many of the speeches online, and you may read these transcripts through the links in the aforementioned article. For this I say, way to go AU!

What is disappointing, however, is that just like every other year, the AU coverage utterly fails to mention the significant financial contribution of your students’ union to the convocation proceedings. They mention lunches and breakfasts, but not who provided them. I suspect that if some corporation – say Shell Oil, to pick one at random – paid for the luncheon, it would be titled the “Shell Oil Student Luncheon” and they would make sure this was well publicized. Bizarrely, just like last year, AU’s report features a picture of the caterers, leading to an impression that they donated services.

Last year AU created a really nice online convocation photo album which included the pancake breakfast and luncheon, but again failed to mention who provided it – leading to the impression that AU pays for all of these perks. Oddly, the caterers were featured in the photo album too. While I don’t think this is an intentional omission, I do know that before my relationship with AUSU I thought the university was awfully generous for providing all of that food and entertainment to the grads.

In past years, many students have been totally unaware that AUSU – and not the University – has paid for the breakfast, luncheon, entertainment [although AU provides a bagpipe player], all of the grad gifts, plus gifts for the honorary grads. They did so this year too, so make sure you thank them if you enjoyed the spread! AUSU not only spends a significant portion of its yearly budget on convocation perks, but they also put in significant time and travel to be at convocation to greet and serve you. Given how much is sponsored by AUSU, I would not look forward to attending a convocation where AUSU was not part of the planning. I don’t know of any other student’s union that funds so much of the grad ceremonies [correct me if I’m wrong, though], so AU is getting a great deal. Remember, AUSU money is student money – so you are paying for much of your own grad. AUSU makes sure your money is put to good use.

To be fair, AU did – for the first time – allow AUSU to give out grad gifts from on stage, and to present the honorary grad gifts during the ceremonies which is a step forward and one that was most appreciated by AUSU. Convocation, in terms of the experience of the graduates, is very much a collaboration between AU and AUSU, who work in tandem to provide an exceptional graduation ceremony which many students have said is superior than that of many other schools. I feel that AU coverage and photo albums should reflect this collaboration, or at the very least, a public ‘thank you’ would be appropriate. After all, the AUSU contribution really helps AU’s profile. When the students’ union presents expensive gifts to the honorary grads, for example, AU – by extension – looks very good, and when grads walk off the stage with their own gifts, to eat a well prepared, free lunch, their perception of AU as a generous and classy institution is is clearly enhanced.

By all reports, graduates had a wonderful time this year. For those who did attend, make sure to let both the university and the students’ union know what you thought, and help ensure an exceptional experience for next year’s grads too. 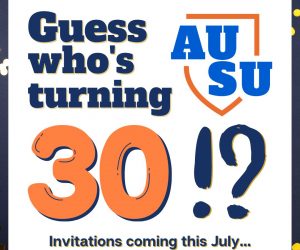