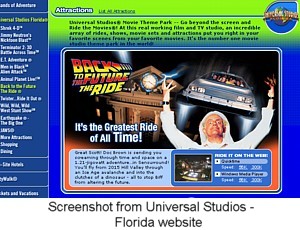 Virtual reality is a computer-generated environment that appears and feels like a real one. In his book Adventures in Artificial Life, Walnum describes virtual reality (VR) as “a new way to communicate through computers. Instead of communicating using text and static pictures, as is typical with computers, VR communicates with as many of the human senses as possible. VR means taking people inside the communication channel, instead of leaving them outside looking in” (pp. 127). It is quiet fascinating to experience virtual reality, as it allows the creators of the artificial environment to fool our sensory system and play with our minds to great extents. I would like to shed some light upon one of my favourite VR experiences.

Being a Digital Media student, I have always been interested in watching IMAX movies and playing VR games in arcades. I have also been on every virtual ride at all of the theme parks that I have visited. Recently, I had the opportunity to visit one of the best theme parks in the world, Universal Studios. It was indeed a great experience of both a virtual, and 3-dimensional world. I had the opportunity to see rides such as Twister, Men In Black, E.T., and best of all, the Back To The Future ride. All these rides are based on popular Hollywood movies.

Back To The Future was one of the best rides I have ever experienced. For many people, this is the ride that made Universal Studios, Florida famous. This ride is a “bone-jarring, stomach-churning, thrill-a-second rocket ride through time and space” (Michael Supinski, http://ift.i8.com). According to Tom Williams, President & Chief Executive Officer of Universal Studios Escape, “Back To The Future-The Ride brings together the most dynamic motion-based experience possible by combining sophisticated hydraulics, multi-channel sound, live effects and a groundbreaking OMNIMAX film to create a total sensory impact experience never before achieved in any media or studio attraction.” All the high-tech special effects give the illusion of time travel during the ride itself.

As you enter the ride, you instantly feel like you are in the “Institute of Technology” as you enter a room, which illustrates footage of what is currently going on at the institute. Doctor Brown, from the movie, is speaking to you via a television screen and preparing you for your journey on the 8-passenger DeLorean automobile. Biff, the enemy, punches the camera and locks up Doctor Brown in his laboratory, steals one of the DeLoreans, and zooms away. The only way to save the institute, according to Doctor Brown, is to send you to get Biff. Hence, the passengers start loading the DeLorean to go “Back to the Future.”

Your DeLorean leans back and you shoot off into the year 2015. During the ride, you dodge cars and veer away from signs, and your car moves from left to right, up and down as you are looking at the big screen in front of you. It feels as if you are really traveling through time. After passing several signs and walkways, blasting through tree branches, you crash through the clock tower and travel back to an underground cave. Unexpectedly, your engine dies and you are about to fall directly into the ground towards a canyon river. The small screen inside the Delorean shows the engine status and it is flashing FAILURE! At the last second, however, the engine kicks in and you shoot backwards and back in time to where Biff is, at a large volcano. A foggy atmosphere is created within the room through the use of a fog machine. You feel like you are really driving through fog as you search for Biff. You later encounter a dinosaur that hits Biff and breaks his “flux capacitor.” Once you have escaped being swallowed by the dinosaur, you chase after Biff to where he is about to land in lava after the dinosaur’s tail hits him. You then travel back to the Institute, crashing through the door, where Biff is surrounded by security guards who bring down the car. Doctor Brown thanks you and the gates of the vehicle open and he commands you to hurry and leave, thereby ending the ride.

Overall, the ride provides you with an opportunity to experience virtual reality first-hand. It involves almost all of the senses: sight, through the big IMAX screen which shows you where you are traveling; touch, by means of the movement of the vehicle as you are sitting in it and traveling through time; hearing, as you can hear all the sound effects and voices throughout the journey; and smell and taste as the fog is created in the room around you. Hence, we see that virtual reality can also fool our sensory system, as we perceive what is in front of us to be real when it is not.

Fly on the Wall—Virtual Convocation 2020